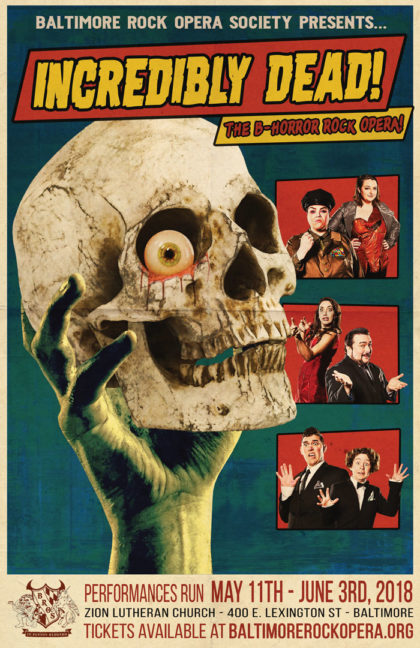 Tonight is the eve of humanity’s reckoning! Because The Baltimore Rock Opera Society is absolutely going to raise some hell— quite literally— in what could arguably be the most fantastic sendup to B-grade horror films of yesteryore with their latest original creation: Incredibly Dead! The B-Horror Rock Opera. Co-Directed by Michael Ziccardi and Sarah Gretchen Doccolo, with Musical Direction by Paul Joyce, and Choreography by Caitlin Rife, this zany,

Cowabunga dude! Surferiffic good times and tikitastic great sets are splashing into Stillpointe Theatre just in time for summer! This outrageously bodacious trippy campy comedy— Psycho Beach Party Directed by Courtney Proctor— is a way groovy wave of a summer roller coaster for all your entertainment needs! It’s time to get funky with Chicklet, Kanaka, and the whole gang down on the sandy beaches of Station North! Don’t miss this Big Kahuna of a summer hit!

Taut sails and fair winds! Load the cannons and hone blades— you’re bound for Tortuga! Baltimore Rock Opera Society is taking to the high seas with their second all-original work of 2016, Brides of Tortuga. Debuting on the successful tailwinds of Chronoshred: The Adventures of Stardust Lazerdong and the remount of Amphion, this swarthy conclusion of the 2016 season serves as a female-empowering vessel of nautical revelry with great creative potential sprinkled liberally throughout the production.

Rebelling against the self-satisfaction of our civilization, at the crossroads where film and theatre intersect, a world premier work has settled itself into The Yellow Sign Theatre for the Halloween season. Written and Directed by Aaron Travis, From a Black Egg is an edgy new approach to the way theatre is experienced. Settling into the notion of German Expressionism and silent films, the work— in true Yellow Sign Theatre fashion— does not show you a mere silent film work adapted to the stage,