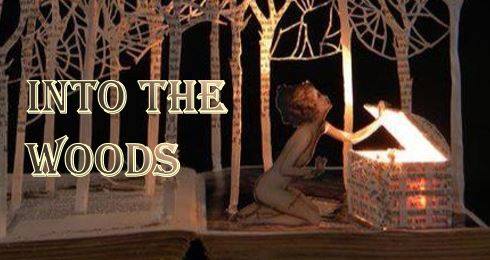 Once upon a time at a theatre just outside Baltimore a director had a wish, to bring to life a production featuring some of the most beloved fairytale characters of our childhoods. His tale is one full of magic, woe, and cows. Does he succeed or is this just a moment better left in the woods? Well you will just have to read on as I share with you my journey at The Heritage Player’s performance of Stephen Sondheim and James Lapines’ Into the Woods Directed by TJ Lukacsina.

In childhood most of our favorite books were illustrated using the visuals to help draw you into the authors’ story. Set Designer Ryan Geiger and Scenic Artist Andrea Bush have brought to life what appears to be drawings from a book as the setting for the musical. Book spines open to reveal a home’s interior and a castle, and a tower, while the beginning words of any good fairytale looms in the corner as a beautiful frame for Rapunzel. The back scene even is a draft of a story that is being written and edited. The pair have done a beautiful job of drawing you into this world before even a word is spoken. Adding to the design is Lighting Designer (and director) TJ Lukacsina and his beautiful choices for the lights. He has chosen perfect colors to evoke the emotions he wants for each scene and song, as well as playing with the shadows of the stage to add another level to the light. Adding to the environment is the sounds of birds when you come in and well-timed sound effects throughout the show. For that you have Brent Tomchik to thank, he does an excellent job of letting his sounds add to the story and not distract from it.

If you go to a ball like the storybook princess Cinderella, of course you are going to talk about what everyone is wearing! That is where Costume Designer Andrew Malone and Makeup Designer Jacqui Maranaville join our story. The overall feeling of the costumes and makeup is like the characters have stepped straight out of a storybook, however there were a few odd choices here and there. The face of the beautiful Rapunzel is all but lost except for a pop of blue lip and Little Red appears to have silver smudges on her cheeks when she moves from light to shadow. However, the beautiful Cinderella looks just as you would imagine in a white ball gown and glittering on her face. And the witch has a stunning transformation from a haggard woman to a beautiful enchantress!

What would a musical be without music and dance? Well, it wouldn’t be would it? Music Director and Conductor Chris Pinder has led both his orchestra and his singers with great skill. He has assembled a strong group of musicians to play the music written by the great Stephen Sondheim. They ebb and flow like an ocean in sound and play as though they were straight from the soundtrack. The singers have beautiful moments of harmonies and several very good solo moments. Choreographer Rikki Howie has brought in movement and life into the shows songs that keep the story moving through the dance. Admittedly there were a few moments where it was strange to see dance, for example the duet by the Baker and his wife “It Takes Two” but the added element just seemed to bring the pair closer together.

Now comes the bit that every story needs for where would it be without the characters? Director TJ Lukacsina has selected a cast of actors to tell his story that perform well as an ensemble and have a few standout performances.

An instant favorite is Atticus Boidy as Jack. From the moment he takes the stage to his last bow, Boidy perfectly captures the innocence and defiance of the young boy who climbs the beanstalk. The journey that he takes Jack on from young boy who wants adventure to a young man who is ready to save the kingdom is stunning, and not to mention he has a beautiful voice that is perfectly suited for “Giants in the Sky”. Also notable is Jack’s Mother played by Temple Fortson, she brings to life a character who has clearly been brought down by life but has hope for her son and his future. While her time on stage is brief Fortson definitely uses the time to her advantage creating a very memorable performance.

Taking on not only the Wolf but also Cinderella’s Prince is John Carter. His first appearance is as the hungry wolf who is after Little Red, Carter will make your skin crawl (in the best possible way) as the persistent and predatory wolf. He returns as Cinderella’s Prince who is attracted to anything that is female and alive, except the step sisters. In this role Carter also succeeds never dropping his entitled and suave character. His princess, Cinderella, is played by Sydney Phipps. Phipps certainly looks the part of the fairytale princess however her voice leans more toward a pop feel than the traditional feel of Sondheim. Phipps is lovely on her own but tends to be overshadowed by the other actors at times.

The Baker is played by Scott AuCoin and he brings to life a very loveable and relatable character. AuCoin brings out moments of hopelessness and moments of great strength from his character. Easily a difficult character to play, AuCoin makes the acting of it seem effortless; he has a beautiful voice but seemed to struggle at times with the timing of the songs, but opening weekend jitters can do that to you! As the Baker’s Wife Alana Simone brings you everything that you could want if you go in knowing the show. She is sweet, determined, envious, confused, and lovely in the role. With a beautiful voice and a badass attitude to boot, she shows she is there to get the job done and get what she wishes for.

Rowena Winkler as the Witch is possibly the most impressive female in the show. She has the comedy and emotion down for this multifaceted character. Winkler carries herself and the character as though they had just stepped out of the pages of your favorite fairytale. Her voice is amazing, though notably lost some of its strength towards her final song, but was regained for the tear-wrenching solo in the finale! As Little Red, actress Mia Coulbourne, seems an interesting choice for the sassy little girl. She appears to take the role more towards the serious and less towards the comedic that is lacing her lines. Her voice, like Phipps, leans more towards the pop genre and struggles in her memorable song “I Know Things Now”. This is not to say that Coulbourne doesn’t evoke emotion in the role as her best moments come in the second act when she plays against Phipps and Boidy in the final scenes.

Overall this trip Into the Woods has its ups and downs, there are moments of pure light and moments of maybe a little grayer light. Which reflects the musical itself in its twists and turns. However, a moment of great light for the company is their donations to charities for which they have chosen Spring Grove Hospital Patient Fund and Milk and Bookies! The show is a unique take on old stories that hold a place in everyone’s hearts.

Running Time: Way too long with not a long enough intermission

Into the Woods plays through November 19, 2017 at The Heritage Players in the Rice Auditorium of the Spring Grove Hospital Campus— 55 Wade Avenue in Catonsville, MD. Tickets can be purchased at the door or in advance online.