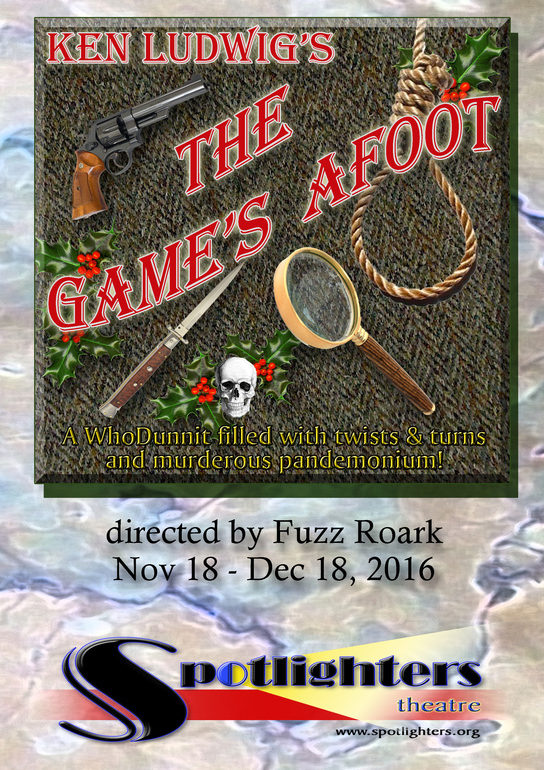 Madhouse doesn’t begin to describe the utter shenanigans happening in William Gillette’s New England mansion on Christmas Eve. Scandal! Mystery! Murder! For god’s sake, there are actors present! What else could be expected from Ken Ludwig’s bitingly humorous and boisterously bloody play The Game’s Afoot? Directed by Fuzz Roark, this scintillating madcap comedy with just a dandy drop of blood for the murder mystery enthusiast in us all is the perfect way to ring in the holiday season.

You aren’t the only one who can tell things from small details, Resident Set Designer Alan S. Zemla. Audiences will well note the precision to detail when it comes to the decorative abilities that Zemla puts forth in furnishing the Gillette mansion. Note the authentic appearance of the dated props— the radio, the pipes, the old-fashioned Christmas tree— not to mention the slew of murder weapons carefully mounted upon the wall. One might mistake the set for an in-the-round take of Deathtrap given the number of weapons featured on Zemla’s set. The crowning glory of the mysterious set, however, is not all of the lovely décor, but rather the hidden bookcase chamber, which at the simple tug of a pulley cord swings wide open to reveal a secret antechamber— perfect for escaping from a crime or stashing a corpse!

Blinking lights and crashing sound has never been more perfectly executed on the Spotlighters stage in recent history than it is presently in The Game’s Afoot. Resident Lighting Designer Al Ramer perfectly times flickers of electrical outage with rolling ripples of thunderstorms to create the perfect spooky atmosphere in which a murder could occur. Of course as Ludwig’s play is more comedy than drama, the effects come with a melodramatic flare, which is still impressively executed, making Ramer’s work exceptionally well-fitted to the production.

House Costumer Andrew Malone finds his footing in the show’s era. With well-fitted costumes that accentuate the melotheatrical nature of each of the characters, Malone pulls together outfits that are timely and seasonable for the gathering on Christmas Eve in 1936. The tweed coat is Sherlock incarnate when featured upon William Gillette in the second act, and the transition from evening wear to pajamas and robes across the cast is delightful. But where Malone really shines in his sartorial selection is the party gown featured on Daria Chase. Reflecting every ounce of her cutthroat diva nature, the lavish draped affair is the perfect accessory to her biting and decadent personality.

A nod of approval must be tossed in the direction of dialect coach and accent consultant Sherrionne Brown for her impeccable work in crafting and cultivating hints of the Trans-Atlantic sound for certain characters. On Simon and William Gillette this sound is most notable, with Simon in particular having a heavy hand of it, leaning almost a bit far over into the English side of it. Brown’s consistency with her guidance helps lend an air of authenticity to the play’s era.

The show itself has the potential to drag, just given the exorbitant amount of build-up required to actually get the action underway, but Director Fuzz Roark keeps things clipping along at a comedic pace which well delivers the intentions behind Ludwig’s script. His casting choices are appropriate and each of the performers settles nicely into their niche of caricature without overdoing the more heightened elements of their characters. Though the cast is small, with one of the performers not even arriving until the second act, each member of the ensemble plays well with the others, keeping suspicions high and hilarity perpetual.

Inspector Harriet Gorring (Suzanne Hoxey) is the late-comer to the party, but arrives with gusto and guns blazing, proverbially of course, no Inspector in 1936 pops up with a pistol ready to fire. Hoxey starts off a bit nervous in her portrayal of the Inspector, though this falls readily in line with the character’s yen to be a stage performer and is easily dismissed as chosen character work rather than opening night nerves. Her pointed attitude when it comes to dealing with the overzealous William Gillette is what drives her character and keeps the audience interested in what it is she’s saying and doing.

Bubbling with newlywed bliss and a fair bit of dippy ingénue disposition, Aggie Wheeler (Kellie Podsednik) is ripe with simpering emotions and delicate sensibilities. While Podsednik does approach the character with an appropriately winsome disposition and vocal affectation, there’s more than meets the eye when it comes to the convoluted nature of her character in Ludwig’s script; this is a concept that Podsednik handles divinely, all things considered. It’s her interactions with Simon Bright (Andrew Wilkin) that are truly to die for. A uniquely versatile performer in his own right, Wilkin imbues the character of Simon with most impressive accent featured in the performance. It has to be said that his portrayal of Simon is all but channeling Finn Wittrock’s Dandy from American Horror Story: Freak Show, which is both disturbing and delightful all in one fell swoop.

Taking a good crack at supporting role comedy, Madge (Ilene Chalmers) and husband Felix (Tom Piccin) are quite the pair when it comes to deductions and reasoning. Though their tempers flare, ebbing and flowing a bit like the river at the bottom of the French doors on the Gillette estate, both Chalmers and Piccin bring a delightful sense of comic timing and delivery to the performance. It’s Piccin’s ability to portray a fully flabbergasted individual at the top of the second act that really showcases his performance ability. Gestures and facial expressions in this scene and the hidden-bookcase instance are simply smashing.

Ruthless, evil— a theatre critic for God’s sake— Daria Chase (Melanie Bishop) is delectably diabolical and lives up to the vivid descriptions assigned to her prior to her arrival. Bishop purports herself with a haughty air that is perfection incarnate for the stereotype that is a mid-1930’s theatre critic. Flaunting her blackmailing talents and sexual prowess, there is something enigmatically dangerous about her characterization that is both repellent and enticing at the same time. Her heightened sense of theatricality is perfect for both the séance scene and the melodramatic climax of her character’s storyline featured in the second act.

Posing as the polar opposite to the vicious villainess, Martha Gillette (Penny Nichols) is the dotty maternal figure who in every sense of the character is zany and quirky and not quite right in the head. Nichols is a scream to watch as she flits about being overly nattering when it comes to her son William (Thom Eric Sinn) and overly indulgent when it comes to the rest of the guests. Simple is a word best suited to her portrayal, in both senses of the descriptor, but a little goes a long way as far as Nichols’ is concerned, making for a series of hilarious conclusions by the time all is said and done.

Thom Eric Sinn finds a kinship with Sherlock Holmes by way of the rather eccentric William Gillette that is equally delightful as the rest of the performance. With a heavily affected accent and an equally expressive set of facial features that are perfect for moments of discovery, confusion, and utter befuddlement, Sinn creates a respectable comedic masterpiece when it comes to Gillette, keeping the audience ever so slightly off-balance when it comes to his true intentions. Just as zany as his mother and twice as astute as the detective, Sinn’s Gillette proves one humorous chuckle at a time that it really is all very elementary when you get down to it.

Tally ho! Hurry yourself off to Baker Street— wait, no, no, no— to St. Paul Street so that you can catch this sprightly murder mystery of a comedy before the holiday season comes to a gruesome end!

The Game’s Afoot plays through December 18, 2016 at The Audrey Herman Spotlighters Theatre— 817 St. Paul Street in the historic Mount Vernon neighborhood of Baltimore City in Maryland. For tickets call the box office at (410) 752-1225 or purchase them online.

One thought on “Review: The Game’s Afoot at Spotlighters Theatre”