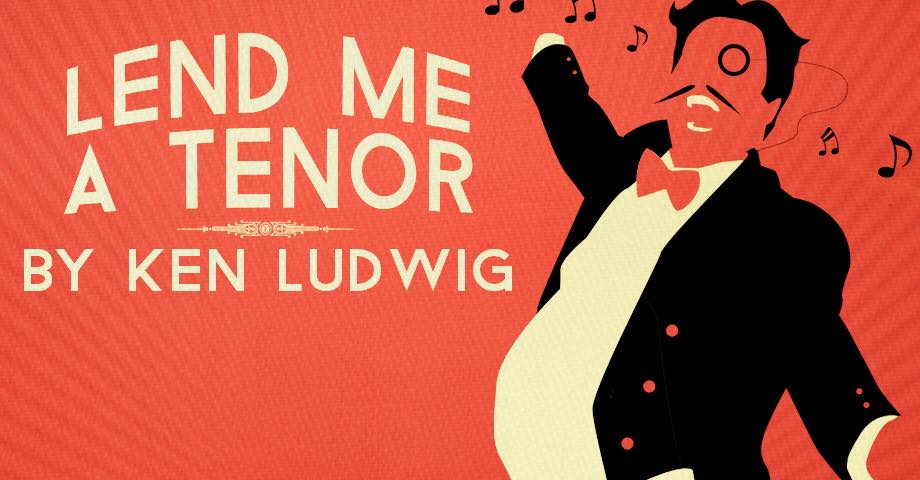 Che pazzo! Che buffo! Che divertente! Dio mio, che spettacolo! A-wha? You no speak-a de Italiano? That’s-a okay. Neither do they. Not in Ken Ludwig’s Lend Me a Tenor now appearing at Third Wall Productions, anyhow. This madcap farce filled to the brim of mocking stereotypes will have you choking on-a your spaghetti before the evening is through! Directed by Mea Holloway, this zany runaround comedy is fortified with door-slamming, bed-breaking action that will keep you chuckling from start to finish.

We’ll get the white elephant out of the way quickly, the show’s pacing needs a kick in the pants. The comic delivery is intrinsic to both the script and the performers, there are just moments when pauses linger too long, exchanges don’t leap with rapid fire from one to the next, and glorious comedic opportunities fall through the cracks in the silences. With a quickening of the show’s overall tempo the show would be that much funnier. Individual performers possess this urgency and sense of frenetic importance it just doesn’t seem to translate across the cast as a whole— until the ridiculously hysterical two-minute recap of the show during the curtain call. It is the hope that as the show enters its second weekend the pacing will improve, allowing the show to grow to its full potential.

Set Designer John Keefe and his build crew (Pat Rudai, Kyle Levine, Ed Higgins) and dressers (Ann Pallanck, Amy Rudai, Laurie Zellhofer) they’re not-a-stupid-a! They know how to make a slamming-door set functional! Keefe’s design is actually quite lavish, which is appropriate for the grand hotel suite its meant to be encapsulating, and overall fits the bill for Ludwig’s comedy. Actualizing five of the six suggested doors, Keefe makes a delicious visual split between the bedroom and the sitting room of the suite and invites the audience to join in the madness of the mistaken identities through this device. The trio of set dressers adds nuanced touches to the scene’s aesthetic with little decorations and the warmly inviting color scheme of the suite’s walls.

Director Mea Holloway, who wears many hats in the production including that of a character and Costume Designer, keeps her head about her through all the madness. (Including the moment where she takes part of the door with her!) The costumes are simple in their nature but era-appropriate and lend an air of timelessness to the show while not feeling outmoded. In particular the dresses— the turquoise-and-bow affair seen on Maggie (Holloway’s character) the suggestive sparkly number featured on Diana, and the gaudy crystal glitz affair used for Julia— are what deserve the praise from the show’s sartorial selections, though that is not to say that Holloway doesn’t do the men justice in their many suits over the course of the evening.

Lighting Director Jim Shomo deserves a nod as well for his deft hand at creating natural interior light. Though the zombie green wash to start up the second act is a bit peculiar, for the most part the luminescence inside the hotel suite appears quite natural. Shomo does an exceptional job of highlighting the ‘big reveal’ scene at the very end of the first act with his split-focus spotlighting that happens in the bedroom. That’s all that can be said on the matter without spoiling a major plot twist, but it’s impressive and praiseworthy just the same.

It seems that the minor characters are running away with the show when it comes to scene stealing and moments in the limelight. Maria (Diana Ragonese Mitchell) the unfortunate wife of the Italian tenor, or the wife of the unfortunate Italian tenor— take your pick— is featured for only a few moments throughout the production but her brassy personality and outrageously broken Italian accent sticks in the mind long after the production concludes. Blending something from east Jersey into her patois, Mitchell makes the character even more humorous by giving that ‘shore-mafia-trash’ feel to Maria’s persona, particularly when it comes to going at Tito like she’s out to kill.

Julia (Patricia Brunker) is of a similarly potent existence, though with much less Jersey street cred and much more ‘Waldorf Astoria savoir faire. Highfalutin and campy, Brunker makes an entrance that defies description and dotes over Tito in a similar fashion. Outdone only by The Bellhop (Ed Higgins), Brunker’s approach to Julia is most humorously delightful. Higgins is running away with the show tucked up inside his ridiculous little bellhop’s cap. With spastic outbursts and comedic overtones that far surpass the heights of Everest, Higgins’ goes all out when it comes to playing up the melodramatic nature of the supporting character. Watch his gestures closely, particularly when he starts to go into spastic mode, which to be fair is just about every time he’s on the stage, and you’re in for a hysterical treat!

Vying for title of femme fatale in the eyes of Tito Morelli, both Maggie (Mea Holloway) and Diana (Roni Mosco) are strong contenders. While Holloway presents her charms as coy innocence and demure delicacies, Mosco is a bit more forward with her feminine wiles. Both woman have a strong sense of presence on the stage and keep their wits about them, though Holloway ends up quite smitten when it comes to the Italian tenor. Mosco serves up the saucier side of things and presents a much more aggressive character with her portrayal of Diana. This serves as a welcomed balance to the meager yet acutely entertaining Maggie, particularly when it comes to the farcical elements of jumping in and out of closets and bathrooms.

An irate bumblebag of blustering wind is a suitable description for Saunders (Michael Zellhofer.) Living up to this notion, Zellhofer keeps his outbursts lively throughout the performance. The physical shtick of him going after Tito is most entertaining, especially once certain events, which must remain unspoken to keep the show’s charming mystique preserved, unfold. Zellhofer’s interactions with both Max (W. William Zellhofer) and Tito (J. Purnell Hargrove) are most entertaining, particularly when it comes to ‘round-the-sofa’ shenanigans and the chase scenes that ensue thereafter.

William Zellhofer and J. Purnell Hargrove are two peas in a pod when it comes to being comic cutups in this production. Singing like brothers, carousing like chums, the pair of performers are comrades in arms when it comes to the comic upkeep of the show. Both Zellhofer and Hargrove deserve commendation for their quick-spun wit and ability to recover a scene gone awry thanks to the beastly deity known as live theatre. (Now complete with broken bed!) Their ability to read one another’s responses and reactions are quite sharp, resulting in finely tuned exchanges which maximize the show’s comedic potential. Zellhofer is a man of gesture and facial expression while Hargrove relies more heavily on his vocal exacerbations to get the humor across. Like a hand in a glove they’re the perfect fit for the characters and perfectly matched against one another for this zany farce.

It’s a delightfully farcical romp, an evening or afternoon of theatre designed to entertain and it certainly lives up to its intentions. Lend Me a Tenor has large comic potential, and a great big— passion from everyone involved.

Lend Me a Tenor plays through August 28, 2016 with Third Wall Productions at the Episcopal Church of the Messiah— 5801 Hartford Road in Baltimore’s Hamilton neighborhood. Tickets are on sale now and can be purchased by calling 443-838-4064 or purchasing them online.

3 thoughts on “Review: Lend Me a Tenor at Third Wall Productions”