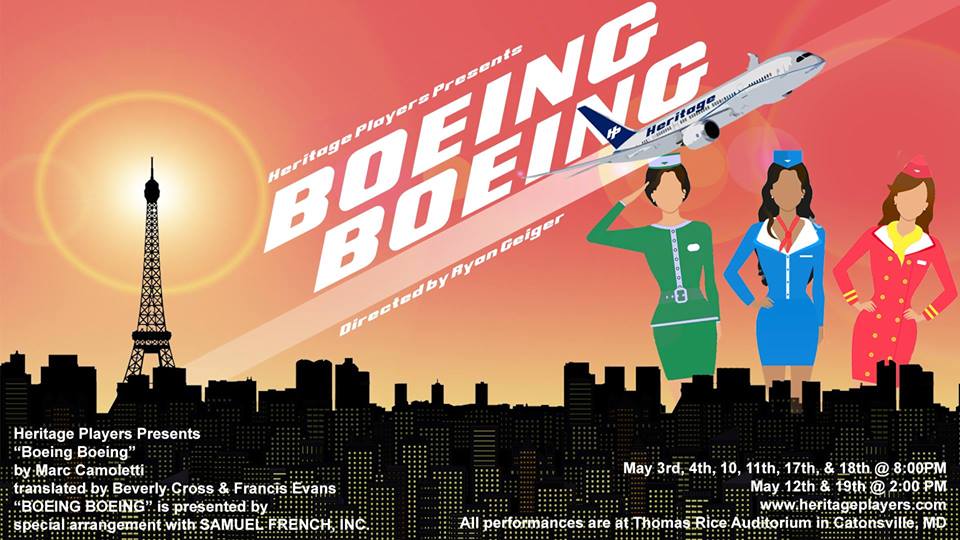 It’s all about the time tables! You’ve got to get yourself a time table! Check your time tables and you’ll see that they’re telling you it’s time to board Flight-519 on Heritage Airlines and enjoy their in-flight entertainment: Boeing Boeing by Marc Camoletti. Directed by Ryan Geiger, this flight-based French farce will whisk audiences away to Paris, France circa 1962 and give them an inside look at an American bachelor in Paris who has landed himself a fiancée. Or three.

A man of many hats, Director Ryan Geiger is also serving as the show’s Set Designer. Gray-purple walls with matching couches and a few tasteful art pieces keep the apartment simple but lived in, or at the very least inhabited. But the impressive feature of the set is not the couches or the sparse wall-hung paintings. The doors are the praise-worthy feature here. A set of swinging French-slat doors, and five sturdily constructed, functionally affixed, and readily closing doors are mounted at various intervals into the walls of the apartment. Doors shouldn’t be that big of a deal, except for in a farce like Boeing Boeing where the chaotic calamity of coming and going is dependent upon said doors opening, closing, and staying closed is the lynchpin for the show’s comedic fluidity. Hats off to Geiger for reinforcing those doors and keeping them fully functional throughout the performance.

The show has a few bumps and hiccups along the way, likely a case of opening night jitters, though the cast deserves superb accolades for their handling of ‘couch catastrophe’ near the end of the performance. It’s a funny show, albeit dated, and Director Ryan Geiger rises to the challenge in this current political climate of showcasing the humor of a 1960’s farce whose central plot point is juggling women like playthings, objectifying them for their looks, and actively engaging with three of them without the others knowing about one another. Geiger handles some of the uneasier moments that are scripted into this farce with reverence, accepting that the show comes from a different time.

Geiger’s only real downfall with the production is the overall pacing and some of the accents. The play is slow to take off, and the exchanges between Bernard and Robert as well as Bernard and the remainder of the cast is languid and meandering, rather than galloping toward disaster. Once the real calamity of the farce get going— near the end of the first act and again in the middle of the second act— the pacing is superb, the comedic timing of the farce delightful. It’s getting there that seems to take forever and could use some tightening. Accents across the board are strongly uneven and at times make some of what’s being said, despite the microphone system (which was delightfully behaving itself at this performance) difficult to hear. Katie Sheldon delivers the most consistent and authentic accent of the evening as the irate Italian Gabriella.

Props must be given to Properties Designer Heidi Vause, the three Airhostess Bags are quite impressive. Whether she’s procured them or fashioned them herself, the logos of TWA, Alitalia, and Lufthansa air hostess bags are crisp, clear, and look legitimate. They even match the vibrant air hostess uniforms assembled by Costume Designer Robin Trenner, who puts Gloria of TWA in red, Gabriella of Alitalia in blue, and Gretchen of Lufthansa in yellow. Couch your concerns, ladies and gentlemen, the props and costumes of this show are solid, sturdy, and stand strong.

Bernard (John Sheldon) has the world spinning around him— quite literally— as his three air hostess fiancées come and go in and out of his Parisian flat. Sheldon is rather down to earth and not at all cocky or smarmy the way the text might suggest. When he goes into full-blown meltdown mode, Sheldon’s panic attacks are very expressive and hilarious to watch. Keeping his time tables organized is the surly and sassy Berthe (Claire Sherman.) As the maid of the flat, Sherman has a keen sense of her one-liners, snappily delivering them with just a hint of brusque zest, which adds to their humor.

Richard Greenslit is channeling the essence of The Big Bang Theory’s Sheldon Cooper when it comes to his presentation of Robert. Awkward, slightly befuddled, and at times completely bewildered by what’s happening around him, Greenslit fits the bill for this fish-out-of-water character. He has wildly expressive eyes and facial expressions that add to the more comedic moments once the true chaos and din of the show get underway. The way he throws himself into doorframes to body-check the girls from getting into or going out of various rooms is quite amusing. He brings something unique to each of his interactions with the four women in the cast— in particular Gretchen, and its delightful to watch him shift from woman to woman as he tries to find his place in this big mess of Bernard’s life.

Loud, brazen, and full of bubbles like any red-blooded (and red-costumed) American, Jessie Duggan makes Gloria a wham-bam-thank-you-ma’am burst of energy that bottle-rockets into and out of the flat in no time. Duggan is loud and over-shouts her microphone at times, but this is easy to forgive as she’s so darn spunky. Though she be cute and perky, she be fierce, especially when it comes to laying down the law about who makes the lay in the house. Her “technical practice” in the second act is a real scream and arguably the funniest scene in which she is involved.

With a golden butter jacket and screaming electric lemon dress, Kate Crosby’s Gretchen is impossible to miss when she makes an entrance. (At this performance there were some wig issues but Crosby held her own against the cumbersome, slip-sliding hair affair.) Though her accent is a train-ride from Aix-en-provence to Aix-La-Chapelle, her personality is bold and commanding, especially when she’s telling off Robert. Crosby brings a fair bit of punch to the stage both in her vocal delivery and in her physical presence, which is appropriate for the German stereotype to which the script plays.

Stealing the show’s thunder, by bringing a thunderstorm all her own in physical performance, vocal delivery, and all around passion-driven Italian attitude, Katie Sheldon as the amorous Gabriella is a fierce force to be reckoned with. With ardent fervor flowing through her veins, Sheldon’s Gabriella possesses a fiery temper that is perfectly suited for shouting at Bernard and putting Robert into his place as well. She dominates each scene with polished flare and when her vocal rages go into full swing, she’s an honest hoot to watch. Between her jealousies and her amorous declarations, Sheldon’s Gabriella is queen of the air, the apartment, and all things involving Bernard.

Grab your time tables, check them twice, and board Heritage Airlines Flight-519 so that you can catch their witty and passion-driven production of Boeing Boeing. In the event of an unexpected crash landing, couches will not double up as flotation devices.

Boeing Boeing plays through May 19, 2019 at The Heritage Players in the Thomas Rice Auditorium of the Spring Grove Hospital Campus— 55 Wade Avenue in Catonsville, MD. Tickets can be purchased at the door or in advance online.

James and The Giant Peach at Heritage Players
Close