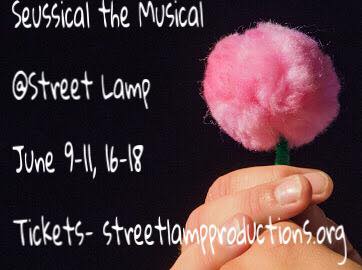 Then hurry up quick! There’s no time to lose!

You must take a journey up to Rising Sun!

There’s a little black box theatre there, tucked away in a corner

And if you need a great show, they’re what the doctor ordered!

Directed by Dickie Mahoney with Musical Direction by Shane Jensen

There’s everything in it— including puppets, though not by Henson!

And some of those puppets made a great migration, like the little hand fish or the dark-glow snails

They swam all the way over from— well, we’ll save that story for another fairytale!

Why you won’t believe what they’ve accomplished with this tremendous feat!

They’ve packed the tiny black box with some 200 actors!

Into your decision to come out and see this phenomenal show

With a cast of about three dozen, just so you know.

Director Dickie Mahoney, is a one-man showstopper; he’s Set Man, Costumer, he wears all these hats!

He gets the ball rolling, he keeps the show moving, and it looks great! What could be better than that?

Why having an ace up his sleeve, don’t you know, when it comes to the magical world of the dance

Choreographer Bambi Johnson is here; she’s making astonishing magic, and not by chance!

It takes a level of skill, panache and much pride, to accomplish the magic Johnson puts on the stage

There are jaunty head bobbings all through “Egg, Nest, and Tree”

And handwork to marvel over during the “Hunch Song”— you’ll see!

Too many dance styles for description because in this show Johnson keeps dancing alive!

Why at one point the various ensemble start to move, groove, and shake, why they even hand jive!

Back to Dickie Mahoney and his juggling circus

Everything he does really works out for us!

And by us I mean the audience, we’re a part of this journey as well!

Because we’ll feel the jungle splashes! We feel leaves when they fell!

And the scent of fresh clover will fill your nostrils, I’m being serious!

All these wonderful add-on’s make the show quite delirious!

You’re living and breathing in a world bursting with Seuss!

But one more thing there I forgot to mention

Such attention to detail like all the crutches and bruises

At the end of the first act on all those tumbled-up Whoses!

That’s just one example of his theatrical magic at work

It’s a trifecta dream-team, put together for this show

Marissa Broujos and Stephanie Smith might just bump into you!

They’re mimetastic masters! Loaded up with joy and glee

They flit through the theatre as happy as can be!

Broujos and Smith are in their own special show

Doing those things that only THINGS can do, don’t you know!

But if I listed them all out, you’d be here for days gazing

At all the wonderful names of those actors

So just go see the show, that would be much compacter!

Back to Jensen and Johnson because a great influence they are

On those Wickersham Brothers, who look a bit like Orioles baseball stars

Though that’s just their costumes, complete with wicked cool shades

These monkeys are funky, putting Johnson’s choreo on parade!

Of these funky-butt monkeys who just won’t leave Horton be!

They lope and they ape, goofing off all through “Monkey Around”

Why this trio of broskies are too cool to slow down!

Mahoney at work once more with sartorial selections

The feathery fatigues for the Bird Girls are perfection!

And their popping personalities make up the restes!

They sing and they dance, they shake feathers and prance, they’re stupendous and really quite good!

They backup the big birds, like Mayzie and Gertrude, their voices are fabulous and sweet

Let’s talk about Mayzie, the boisterous Tigga Smaller all trussed up in feathers of orange and yellow

She’s sassy, she’s saucy, like her namesake: amazing! Why this bird is everything except mellow!

Smaller is one bold belting bird, outlandish and quite different from Gertrude McFuzz

But we’ll get to Gertrude a bit later; there’s still so many things about which to buzz!

Like the Whos! Down in Whoville, yes, we mentioned the ensemble already

And how adorable they are and how of them there are many?

But what wasn’t mentioned in that statement before— was their big man in charge, the leader of Who-life

Why, Mr. Mayor of Whoville, Steve Flickenger and Amy Tucker, the Mayor’s Wife!

Both are fair of voice and quite strong of character, and both look dashing in shades of yellow and sun

The whole Whoville gang has cheery bright clothing, well, the whole gang, except for that one

The big Mr. Grinch, why Matt Peterson who is covered in furry shades of green

He’s robust voice is heard and his tall figure is definitely seen!

But back to Flickenger and Tucker; the Mayoral duet

“How to Raise a Child” is their great song, and they’re as great as it gets!

There’s so much happening on the stage, so I’m afraid this review is quite scattered!

My biggest fear is forgetting someone that mattered!

Of course everyone mattered because the show was spectacular!

But it couldn’t be any other way, isn’t that the condition?

See a show about Seuss: write a rhyming review!

But back to the praising, there’s still so much more to say!

About the General, his butter-up battle, and the way that he pattered!

But he’s not listed in the program, well, not as the General as such

But a little bit of research, and one can learn much!

That the General was played by a Wickersham Brother

Cody Palmer with his British patois takes that character much further

Into a humorous vein rather than staunch and scary

Let’s not frighten the little ones, don’t want them to be wary!

The thing that’s so special about this production of Seussical

Is that it is so much more than just a fun musical!

Flapping through the house, she’s a character double-whammy!

And let’s not forget that bitter queen diva, Sour Kangaroo!

Miss Carrie Dill, and she’s quite the to-do!

With an attitude for miles and a big bold brassy voice

You’ll hear her coming, pouch-puppet and all, there won’t be a choice!

I will take a detour for just one quick second

And mention that this is my dozenth Seussical that beckoned

In all twelve times I’ve seen this, and I’ll admit this plain and clear

Never once has this production to my eyes drawn up tears.

And that’s Bobby Mahoney, with his deep emotional connection

His “Alone in the Universe” is so honest and raw

There’s no way to stop the tears that will fall!

But you’re not alone because Mahoney cries too

He’s feeling the feelings of this song just like you.

He gets it! He knows it! And he gives this role his all

He understands: A person’s a person, no matter how small.

And his voice is exceptional, full of gusto and vim

And his facial expressions are quite packed to the brim

With all sorts of feelings, he makes this show real

Bobby Mahoney gives you all the feels!

The most animated bird girl that there ever was

Played by Stephanie Mahoney, why it’s the whole Mahoney bunch

And she’s simply aces, that’s why they picked her, I’ll hunch!

Exasperated and animated and of pattering she’s the queen

With a sublime voice and a costume of blue green

She’s a pip of personality; a real performance delight!

Miss Stephanie Mahoney for this role is just right!

I know this read has been long, you might say it’s a really big think!

And I’m trying to include everything, well everything but the kitchen sink!

And the super surprise ending that features the adorable— well, that remains to be seen!

Spunky and filled with panache, a great voice, and talent as well!

His voice is just dulcet and perfect for singing

And pay close attention to the face-game that he’s bringing!

He sings like an angel, and he runs through the show

With all his amazing thinks ready and rearing to go!

Phew! That just about does it! I got them all and that’s that!

Wait— oh dear. I think I’ve forgotten someone, but— who’s that?

Oh! Oh my gosh! How could I forget the insanely animated man

Robert Tucker, the Cat in the Hat; though we might change his name to the Ham in the Can!

He’s loopy! He’s loony! On his jacket tails he’s running away with the show!

Watch out for Mr. Tucker he’s astonishing, don’t you know!

With facial expressions that defy all description

He popped straight out of the book; why he’s purely fiction!

Imagine a child let loose in a candy store,

With chocolate and coffee, maybe three cups or four!

And that might begin to give you an inkling

Of just what Robert Tucker is thinkling

And his voice ain’t too shabby, so how about that!

But I know you folks are tired of scrolling these pages!

So you’ll have to take my word for it— no wait you can do better than that!

Go buy your tickets! Go see this cat in the hat!

I promise you; heck! I just gave you like two million reasons to go!

Or go in the afternoon while the sun is still light!

With this production imagination explodes straight off the stage and into your lap!

So what if the theatre isn’t a big dot on the map?

You’ll find them— like I did— and I even got lost!

But once you get there, it’s well worth the cost!

These folks are amazing! Phenomenal sensations!

I’m running out of ways to reiterate these iterations!

I guess that means I should wrap this review up; I’ve given you enough reasons to go see this show

Seussical: The Musical plays through June 18, 2017 at Street Lamp Productions— 5 Valley View Drive in Rising Sun, MD. Tickets can be purchased at the door or in advance online.

Seussical at Heritage Players: The Other Half of Jojo