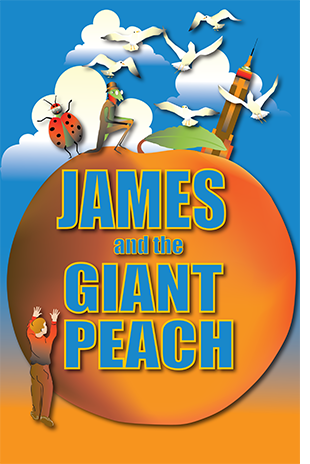 Marvelous things! Amazing, incredible, flabbergasting, marvelous things await theatergoers of all ages on the Maryland Ensemble Theatre’s Stage2 Performance Space as their Fun Company proudly presents James and The Giant Peach. Adapted to the stage by David Wood from the imaginative novel by Roald Dahl, this twisty and highly chimerical tale spins a story of a young lad called James and the marvelous things that await him once he encounters the giant peach. Directed by Shea-Mikal Green, James and the Giant Peach will captivate children and children at heart with a vibrant setting, eclectically impressive sartorial choices, and vivacious characters that spring to life from the pages of imagination right before your very eyes.

Blue skies are smiling at the audience thanks to Set Designer Cody Gilliam’s brightly painted backdrop. Working with Lighting Designer Chance Bender, Gilliam takes shifts in the play’s location— from happy home, to doom and gloom, to the ocean and the airways— with a simple shift in how the space is lit. But the fantastical eye-catching set piece is the pale-orange tinted dome-shaped monkey-bars playset, which serves as the giant peach itself. Gilliam’s simplicity in using this one apparatus as the central element of play really encourages the audience to use their imagination, potentially inspiring them to enjoy their own James and The Giant Peach style adventures on their own monkey bars and playgrounds. Bender gets especially creative with his FX in lighting, creating luminescent neon green dots that flitter everywhere once the “marvelous things” appear on the set.

Sound Designer Lauren Johnson enhances the magical experience of James’ world by adding spirited effects throughout the performance. Perhaps the most memorable is the squishy slogging sound of James’ initial tunneled entrance into the enormous peach. Johnson’s authentic effects, like the peach and when various insects start nibbling on things, really provide an aural experience worthy of the imagination during this highly fantastical production.

Rounding out the aesthetic with her steam-punk inspired couture, Costume Designer Julie Herber sets the visual element of the show on fire. Lighting a conflagration of anthropomorphic awesomeness in these fabrications, the costumes are the element that make the insect characters explode off the page, onto the stage, and into the imaginations of the audience. A fierce fascinator for Miss Spider, Aviator goggles for the Earthworm, and a slew of Victorian— almost Tim Burtonesque inspired— black and white fashions for the dreadful Aunt Sponge and Aunt Spiker are just a few examples of how enchanting Herber’s costumes truly are.

Director Shea-Mikal Green does an exceptional job of coaching her ensemble of talented performers through 55 of minutes of highly captivating theatre for young audiences. Working hard to focus the accents of the characters into their proper English channels, Green finds quirky British sounds that fits each of the different attitudes of the characters with vigor. The Aunts’ Dreadful (Spiker and Sponge) have a shrill aristocratic and haughty overtone that permeates their upper-class English, while the lowly Old Green Grasshopper’s sound is much closer to something Cockney. In addition to these magnificent sounds, Green keeps up the pace, particularly when it comes to swapping out costumes and personalities (like the mean Aunt Sponge doubling up as the sweetly dispositioned Ladybird), as well as transitioning through segments of the story.

Matthew Crawford is the master of the story, starring as the show’s title character. As James, Crawford is congenial and down-to-earth. His ability to follow the natural rhyming meter of the tale is as sharp as his quirky character portrayal. With animated facial expressions, he takes to the adventure— and all of the ups and downs that come with such a journey— with gusto and really moves the tale forward, particularly when it comes to interacting with the insects.

Taking on double roles, as many of the ensemble do in this performance, Matt Lee starts life in the production as a mysterious man, with an enigmatic, albeit disturbingly hilarious, cackle-call of “marvelous things.” This bizarre persona is shed like a caterpillar from its cocoon once Lee becomes the centipede, who is mostly a supporting character in the menagerie of insects, but still has a few one-liners that are worth a noticeable chuckle.

Emily Raines, whose most notable performance in the production is that of the fashionably fabulous Miss Spider, is a contributing factor to one of the many heroic scenes that takes place in the show. Raines, who plays opposite Darryl Warren at the beginning of the story as James’ loving parents, brings a sunny and cheery disposition to the role. Warren, who is the sprightly Old Green Grasshopper opposite Raines’ Miss Spider, adds convivial lightheartedness to the performance as well.

The two scene-stealers who threaten to run away with the show are Amanda Spellman and Katie Rattigan, playing the horrid, dreadful, hideodeous, and terribly rotten Aunts Sponge and Spiker respectively. Spellman and Rattigan are larger than life in their hysterical roles as the nasty, cruel, and over-the-top aunties, particularly Spellman when it comes to being melodramatically inclined to overreacting. Rattigan’s moment in the limelight comes when she embodies the Earthworm, a melancholy and somewhat macabre wriggling bug that just brings forth all the laughs with her pessimistic outlook on life. Ultimately, the pair are an absolute delight— along with the rest of the ensemble— and ensure that marvelous things are experienced continually throughout the performance.

James and The Giant Peach plays through February 28, 2016 at the Maryland Ensemble Theatre’s The Fun Company in their Stage2 Performance Space in the Historic FSK Hotel building— 31 W. Patrick street in downtown historic Frederick, MD. For tickets call the box office at (301) 694-4744 or purchase them online.

Peter and The Star Catcher at Maryland Ensemble Theatre
Close