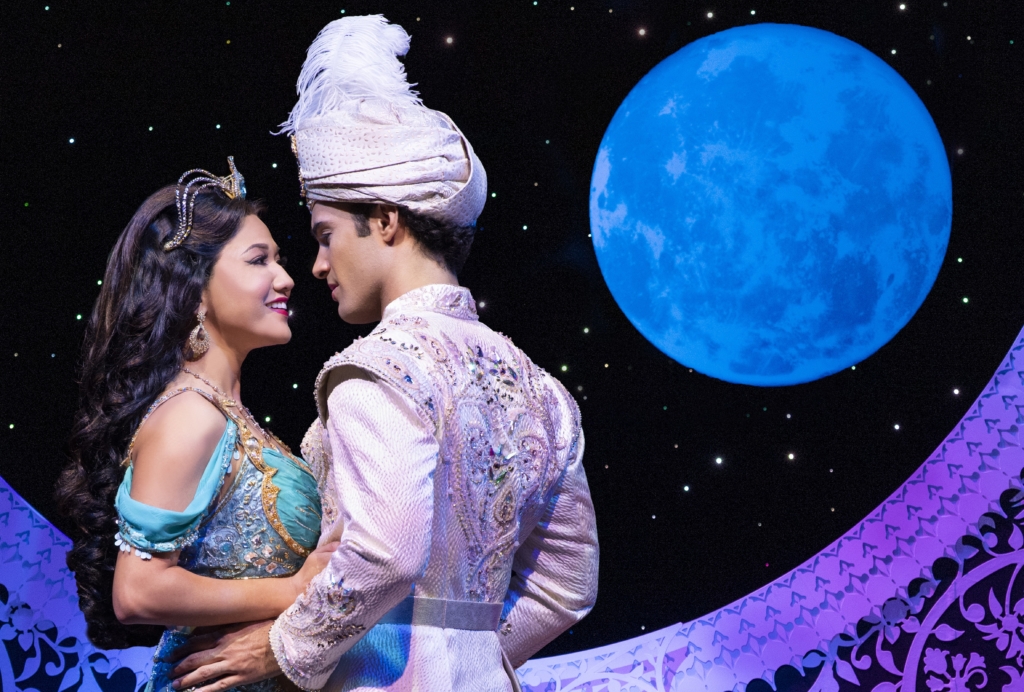 Gotta keep— one jump, ahead of the box-office line! One swing— ahead of the rest! Disney’s got a show that truly tops the rest! So make way— for Disney’s Aladdin! Make way— for Disney’s Aladdin! Coasting in on a magic carpet just in time for the holidays this highly adventurous, memorably Disney stage show brings you a cave of wonders and them some when it comes to theatrical spectacle. Directed and Choreographed by Casey Nicholaw, this Disney tale about a young street rat, a powerful genie, and all the rest that comes readily remembered from the iconic 1992 animated full-length feature film, will wish its way directly into your heart this November. Unbelievable sights, indescribable feelings; Disney’s Aladdin is the enthusiastic family-friendly pick-me-up show of the holiday season.

Never judge a book by it’s cover; the same too goes for the opening scrim of Disney’s Aladdin. Extraordinary wonders beyond your wildest imagination await in Bob Crowley’s scenic design. The cave of wonders alone is lined to the hilt with shimmering, glittering, glamourous gold and will take your breath away (and we haven’t even touched on all the amazing shenanigans that accompany the number inside that scene.) Crowley doesn’t just reserve his aesthetic magic for inside that cave of wonders either. Like a true genie of scenic design, the richly saturated color palette of Agrabah is everywhere— inside the palace walls, outside the palace walls, it’s every bit as magical, high-caliber, and dazzling as you’d expect from a Disney production.

But Crowley doesn’t even begin to scratch the surface of immeasurable visual delights in this production. Costume Designer Gregg Barnes proves to have phenomenal cosmic costume powers (and hopefully not an itty-bitty living space!) Vivacious and vibrant with more sequins and sparkles than necessary to purchase the whole Kingdom of Agrabah, Barnes’ fabrication of fantasy and fairytale is miraculously fantastic. It isn’t just the principals— though Genie’s outfits are stellar, Jasmine’s outfits radiate princess perfection, and Prince Ali’s outfits are the signature marks of a razzling-dazzling Prince— in this production who receive the sensational costumes. Merchants and peasants of the marketplace, the palace guards, and every performer in-between has glorious gem and jewel-tone fabrics with lively patterns, radiant sparkles, and a life practically their own as they mill about, twirl about, and dance through the show. You’ll go dizzy just trying to count the costume changes featured in “Prince Ali.” All hail Stage Manager Vanesa Coakley (and her fabulous run-crew) for lighting quick costume changes of perfection that truly enhance the magical experience tenfold.

Speaking of magical experiences, Whether it’s the blink-of-an-eye costume evolution on Jafar near the end of the production (flawlessly timed and executed) or the revelations of enchanted set pieces inside the cave of wonders, Illusion Designer Jim Steinmeyer will dazzle you, taking your breath away when Aladdin and Jasmine take their signature Magic Carpet Ride. The starry twinkles of the night sky (compliments of the talented Natasha Katz’ lighting design), the sublime pairing of the two principals singing their romantic duet, all burble brilliantly beneath Steinmeyer’s wondrous illusion. The carpet absolutely flies and appears to do so of its own volition. So clearly concealed are the mechanics of the Magic Carpet Illusion that you find your heart skipping beats, believing in all the magic Disney always hoped to inspire in all their endeavors.

Crisp, fluid choreography is Director and Choreography Casey Nicholaw’s signature stamp on this production. The dizzying chaotic beauty of the opening number alone, which features nearly the entire company belting at full volume this welcoming to the narrative, to Agrabah, and to the show, is enough to send your heart racing, eagerly awaiting more of the whirling colors in motion as the gorgeous costumed ensemble spin, swing, twirl, and dance about the stage. Nicholaw’s choreography juxtaposes sublimely against the original fight direction and choreography of J. Allen Suddeth (executed by Fight Captains Michael Callahan and Jason Scott Macdonald), making numbers like “High Adventure” roar with excitement as swords clash and dance moves guide Aladdin’s three sidekicks (who replaced the adorable and loveable monkey, Abu) through their rescue mission. The stunning choreography during “Friend Like Me”, which is too innumerable in its all-encompassing achievement to list in great detail, is pristinely executed and truly phenomenal.

With an ensemble full of exquisite dancers, whose aesthetic live up to the very cheeky line delivered by The Genie (in his narrator guise) at the beginning of the show, (Agrabah— where everybody has 0% body fat!), its no wonder there are standout performances all throughout the production. The snarky and rude Prince Abdullah (at this performance Albert Jennings) who struts through the marketplace like he owns it or Razoul (Bobby Daye) the ferocious captain of the guard who looks more terrifying even than Jafar (he’s got a sword!) come immediately to mind. While Keisha Gilles, Liv Symone, and Annie Wallace— Jasmine’s Palace Attendants (and come on, Disney, we couldn’t give them names?) are both visual and vocal compliments to everything about the Princess. They featured most notably in Jasmine’s only solo number, “These Palace Walls”, enthusiastically and empathetically encouraging her to seek life outside her confinement.

Disney has a terrible track record for transforming their extraordinary animated film villains into crackpot, campy, supercilious comic relief when they make the transition from screen to stage. They have sugar-coated Jafar (Jonathan Weir) and Iago (Reggie De Leon, who is no longer a parrot but a squawking, repetitive sidekick) into obnoxious over-the-top comic relief. This falls to little, if any, fault of Weir and De Leon, but the audiences seem to love the campy shtick, even if it feels tacky and cheap to an otherwise dazzling and rich production. The whole “evil laugh” nonsense is one of those defining moments that keeps these two bumbling characters from ever being taken seriously as antagonistic threats to the plot and the principals. Weir and De Leon play as prescribed, going for every cheap comic trap that Jafar and Iago have saddled upon them in the stage production.

Thankfully there is balance in the Disney universe when it comes to their larger than life stage productions. For every villain-sidekick-henchman combo that they ruin with campy melodrama and forced comedy, they seem to elevate a lesser figure with earnest heart and genuine honesty. In Aladdin, that elevated character is the Sultan (Jerald Vincent) who is subtle with the jokes that are laid upon his character, honest in his moments of discussion with Jasmine, and driven when confronted with true conflict and peril. It seems almost shameful that Disney has not scripted more musical numbers for the Sultan character as Vincent has such a beautiful voice. Vincent receives just the one solo, his own reprise of “Prince Ali” where his gloriously booming and honest sound captivates the ears of the kingdom, welcoming them to share in his glee and delight over the pending nuptials of his daughter.

For anyone expecting the adorable little monkey Abu, you get not one monkey, not two monkeys, but three monkeys in the form of Babkak (Zach Bencal), Omar (Ben Chavez), and Kassim (Colt Prattes) in his place. This trio of loveable miscreants serves as the harbinger for excessive comic shenanigans, but don’t be fooled, they’re more than just laugh-lines who aid in elevating the genuine simplicity and charm of Aladdin. Bencal, whose character is a play on the trope of “starving servant”, gets all the funny food lines, while Chavez, whose character is just a quaint simple silly man who doesn’t know he’s simple, has all of the one-liners that make your heart chuckle in earnest. Prattes’ Kassim, the self-appointed ring leader of the three, is more of the front-man, taking vocal and dance point on all of their high adventures, including the number “High Adventure.” They sing beautifully, blending as a trio and a quartet when joined by Aladdin, and their bodies are impressively expressive for all of their dancing. They bring the vibrancy to “High Adventure” as well as the marketplace show-warmer, “Babkak, Omar, Aladdin, Kassim.” Their voices are at their finest in “Somebody’s Got Your Back”, which features some well-staged send-offs in addition to cute dance moves.

With a pure chemistry that unites them from the meet-cute in the marketplace, through to their final carpet ride, Aladdin (Jonah Ho’okano) and Jasmine (Kaenaonālani Kekoa) are the iconic Disney pairing with much more genuine heart, charm, and honesty. Kekoa, who is featured in just one solo and at least two duets with Aladdin— “A Million Miles Away” and “A Whole New World” brings a feisty and fiery spirit to her portrayal of Princess Jasmine. She is not some prize to be won, as she proves time and again throughout the production, speaking out and speaking up for her rights as an equal. With a beautiful sound and the right attitude balanced over the course of the performance, Kekoa is a glittering jewel in the production. Ho’okano, who is charismatic but in a very genuine sense, has a loveable warmth to him in every step that he takes. Even when he’s grown a hot-head in temper, there is still a raw emotional undercurrent that guides him through those moments. “Proud of Your Boy” and its various reprises give the audience a chance to delight in his hearty sound, filled with feeling and honesty. His half of “A Whole New World” is both warm and inviting, making him a perfect match for Jasmine and for the part of the titular character and leading protagonist.

You ain’t never had a friend (never had a friend) like Korie Lee Blossey as the Genie. Defying description in that larger-than-life magical style, Blossey is a bombastic burst of robust magic with a powerful voice to match his genie powers! It’s hands down hilarious when he pulls that Ravens cap out of his pocket instead of the magic lamp; one well-placed and cleanly executed joke with local flavor can prime an audience for thorough enjoyment. Blossey is a singing sensation, a dancing delight, and his comic timing is snazzy and sharp. He could stand to slow down his speech just a pinch and articulate more crisply through those spoken moments (he’s rattling off laugh-lines so fast that his words are lost in the vocal outcry) but otherwise gives a sensational performance as The Genie. With a rich and hearty belt that carries all through “Friend Like Me”, he will wow you with his punch and pizzazz (yahoo and how!) every step of the way. Blossey is reinventing the Genie with gusto and vigor and doing the character a superb service.

Not a show you’ll want to miss this holiday season— you’ll leave with indescribable feelings, so come on down, stop on by, hop a carpet and fly, to Disney’s Aladdin appearing at Baltimore’s Hippodrome Theatre through December 1st, 2019.

Aladdinplays through December 1, 2019 at Baltimore’s Hippodrome Theatre in the France-Merrick Performing Arts Center— 12 N. Eutaw Street in the Bromo Seltzer Arts District of Baltimore, MD. For tickets call the box office at (410) 752-7444 or purchase them purchase them online.

To read the interview with Korie Lee Blossey on playing the Genie, click here.

POOF! What Do You Need? An Interview with Korie Lee Blossey on playing The Genie in Disney’s Aladdin

Review: Beauty & The Beast at The Hippodrome
Close