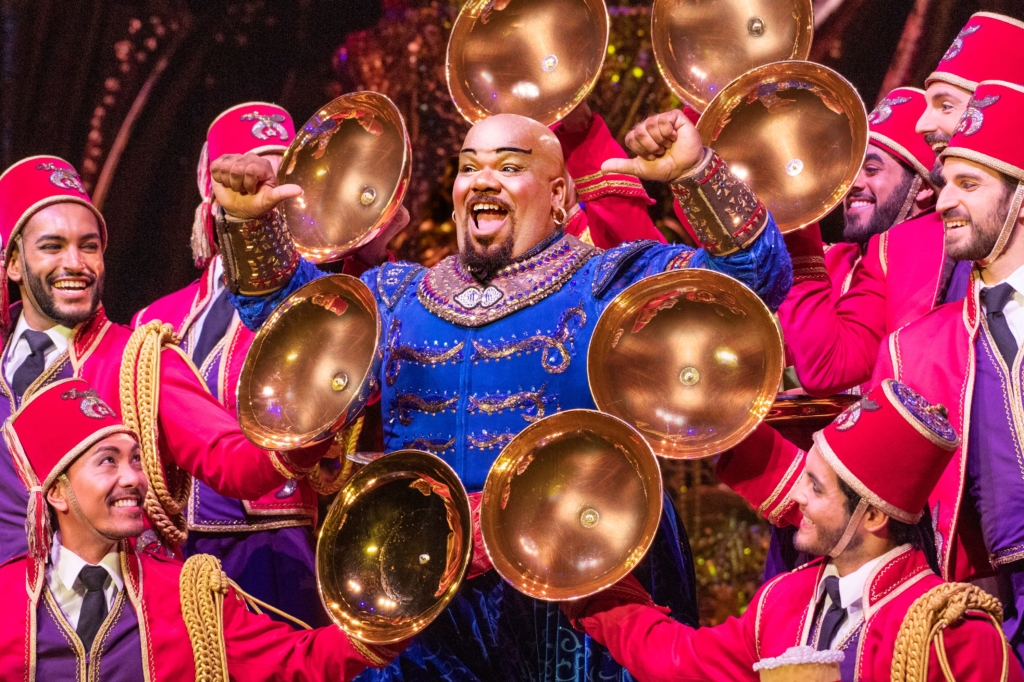 Well Ali Babba had them had them 40 thieves!

Scheherezade had a thousand tales!

But Baltimore you in luck ‘cause on your stage— you got a brand of magic that never fails!

Make way— for Disney’s Aladdin! Hey, clear the way, on the street downtown, hey you, let us through, and come on down— get your tickets in your hand and be the first to see this show! Flying in on a magic carpet for just a few weeks, Disney’s Aladdin will give you all the indescribable feelings you’ve remembered since childhood. Sitting down in a TheatreBloom exclusive interview, we’re talking magic with Korie Lee Blossey, who plays none other than the genie himself!

Thank you so much for giving us some time, Korie! Can you tell us how you came to be a part of this magical and enchanting tour of Disney’s Aladdin?

Korie Lee Blossey: I was in New York, I was doing a show in Brooklyn, I was doing Little Shop of Horrors. It was the year that Aladdin debuted and they were performing on the Tony’s. I was watching it and I thought, “I have to do this. I have to do this. That’s me. That’s ME!” And while I was thinking that, people were calling and texting, saying, “I just saw you on the TV! I saw you on the Tony’s!” And I had to tell them, “No, that wasn’t me, but hopefully someday!” A lot of people mistook me for— and it still happens, I get confused for— James Iglehart, but that is a confusion I am willing to take! If there’s somebody to confuse me for, that’s the one.

So anytime I saw an audition, I would try to make it. One time I went to an audition and I was there for eight hours and I was seen in the last group of ten people. At that time, I was non-equity. They cut down the audition to eight bars of music to sing, and I went in, I sang, and I didn’t hear anything for a little bit. And then they called me back. I went back, I auditioned, didn’t hear anything after that. But then I was doing a show in Utah and I saw that they were looking for the tour. I was working with an agency, and I said, “We really have to see if I can send in a video. And if not, I’ll try to buy a ticket and fly to New York to audition; I really need to audition for this tour!” And they accepted the video. After my video, they asked me to come in and audition. I went in, auditioned, and by the time I got off the subway, they had called and asked if I would be interested in doing a Genie Camp.

What is a Genie Camp?

Korie: So that’s about 12 or 13 guys who all look like The Genie, and we all got together for a week of singing, acting, dancing, and on the last day you did everything you learned in front of everybody you were learning it from. And shortly after Genie Camp, I received an offer for a standby as The Genie and The Sultan. And in my mind that was the perfect way to learn it. Take the time, learn it, and go on occasionally and get to know it. Hopefully some day it would open up. And that someday was September.

You mentioned that you had to do this role because you are the Genie. Are you and Genie very similar? Do you have phenomenal cosmic powers and an itty-bitty living space?

Korie: If only! The powers part, not the itty-bitty living space part. Now, I will never be Robin Williams, but its really more about what makes Korie shine as the Genie. That’s how they pulled that out, Casey Nicholaw’s (Director Casey Nicholaw) amazing direction focuses more on the personality traits that make us shine individually as Genie. And then we make that into the Genie. We get to scat a little bit, influenced from Cab Calloway and that Big Band Era sound. It’s so much fun because it’s you shining through this amazing character that you’ve always seen— well, that I’ve always seen and loved because I’ve always watched the movie. I always say if you liked the movie (Disney’s Aladdin, full-length animated feature, 1992.) When they were starting to make the animated feature, the storylines that they were using for building that? That is where the musical goes back to. So the things that you don’t remember from the animated feature, they’ve actually always been around, they’ve just been able to highlight it now, giving you more of Aladdin’s story and how Aladdin is who Aladdin is.

What has been the most challenging thing about being The Genie?

Korie: The most challenging is doing the 18-minute number “Friend Like Me.” Scene and song, it’s 18 minutes. But it’s also one of the greatest things ever now that I’m doing it full-time. But, to get the tap, to get the singing, to get the running around acting, and to never look like you’re out of breath? That’s hard. But it’s such a magical moment. I tell everybody this all the time, it his the hardest and yet the greatest thing I’ve ever done.

What is your most fun moment on stage as The Genie?

Korie: Most fun moment? Honestly? That would be “Friend Like Me!” But actually, in the beginning during “Arabian Nights”, there is a line when the Genie says “everybody sing” and at that moment I get to look around and see everybody on stage, and that is the beginning of the show— and I get to look at everyone on stage. I’m so excited to be a part of such a phenomenal company with so much talent on that stage, and then everybody just starts belting out, singing “Arabian Nights.” It’s truly a magical moment. Then at the end of the show, when I’m saying goodbye, I get to turn around and have that same moment, and look at everybody on stage, and then end the show.

Is the costume what you expected? Were you thinking it might be a little more Elphaba only in blue?

Korie: I’m glad it’s not the Elphaba-style! But the costumes are so magical! Growing up and doing theatre, the women always got the beautiful dresses and the elaborate costumes. And the men are in business clothes, suits, or everyday clothes. But this? EVERYONE gets the magical, elaborate costumes. Gregg Barnes (costume designer Gregg Barnes) has done an amazing job at designing spectacle, sparkle; it’s phenomenal how intricate every little gem is. And there are probably 350 costumes hand-crafted from all over the world from 350 people.

What is the most magical part of being on this tour for you?

Korie: The most magical is that my wildest dreams have come true on this tour. I truly get to step out and live my greatest dream to date in front of a couple thousand people every night with some of the most talented people that I could ever be surrounded by.

If you had a Genie show up in front of you right now and say, “I will grant you three wishes, Korie Lee Blossey,” with all three of the “no-no’s” in place— can’t kill anyone, can’t make anyone fall in love, and can’t bring people back to life— what would your three wishes be? (And of course, no wishing for more wishes!)

Korie: Right! Three wishes…I wish that the show lives on for a very long time, bringing joy to everyone that it possibly can and then some. I wish that everyone is able to see it that wants to see it. It’s a magical moment and not everybody can get out to see it so my second wish would be that everybody could see it that truly wants to see it. My third wish? I wish to be healthy. For everybody to be as healthy as possible while we’re doing this tour to carry the tour as long as possible and just keep everybody on top of their game, keep them all healthy and their bodies well-maintained because it does take a lot!

What has being a part of this tour taught you about yourself? What have you learned from being a full-time Genie so far?

Have you had any blooper moments that you’re willing to share with us?

Korie: That happens all over the place sometimes! But it’s our job to make sure that you never notice it. There have been a couple times here and there where maybe the elevator doesn’t lift and the Genie doesn’t come out the way he doesn’t supposed to. You still have to make that magical entrance somehow. But again, we’re working with such amazing professionals both on stage and off that even if you mess up, you might not realize that you’re messing up until afterwards because the crew has taken care of it, or because somebody else has covered it so quickly.

If you could be anybody else in the show— no holds bar, and I know you’re in love with being the Genie— who would you be?

What is it you’re hoping that people will take away from coming to see Aladdin?

Why do you want people to come and see Aladdin?

Korie: It’s truly a spectacle that you will never get anywhere else. It’s enhanced with songs from the animated feature and some new songs that you haven’t heard before. It’s a way to understand the story a little more than the animated feature. It’s going to be a great time.

Aladdin opens on November 13, 2019 and plays through December 1, 2019 at Baltimore’s Hippodrome Theatre in the France-Merrick Performing Arts Center— 12 N. Eutaw Street in the Bromo Seltzer Arts District of Baltimore, MD. For tickets call the box office at (410) 752-7444 or purchase them purchase them online.

To read the review of Aladdin at The Hippodrome Theatre, click here.

Aladdin at The Hippodrome

Where In The World Have You Been Hiding? An Interview with The Phantom of The Opera’s SarahGrace Mariani on Playing Meg Giry
Close