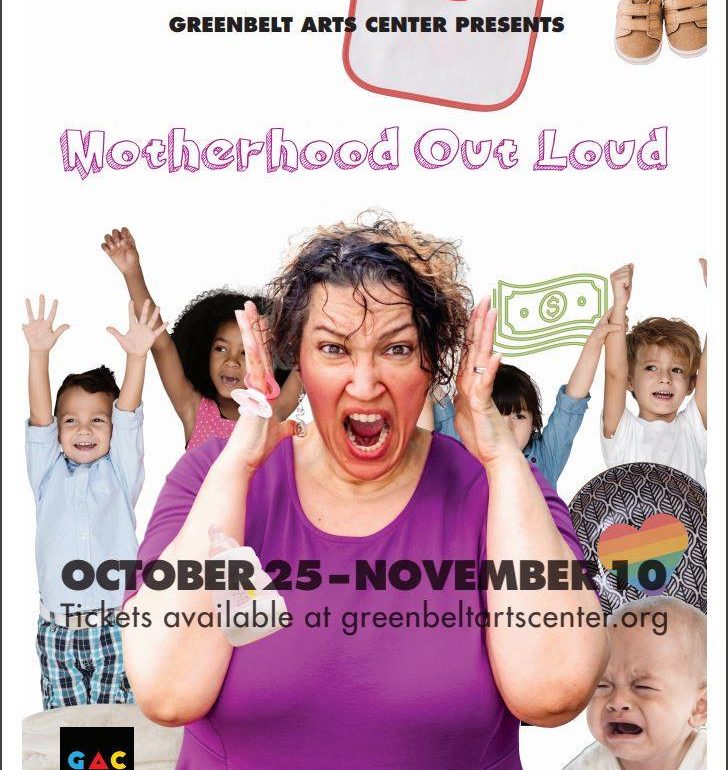 Motherhood: sometimes a complete joy, sometimes an utter pain… but either way, the ladies (and gentleman) at Greenbelt Arts Center are taking us through ALL the motions; the good, the bad, and the ugly of being a mom in Motherhood Out Loud by Leslie Ayvazian, Brooke Berman, David Cale, Jessica Goldberg, Beth Henley, Lameece Issaq, Claire LaZebnik, Lisa Loomer, Michele Lowe, Marco Pennette, Theresa Rebeck, Luanne Rice, Annie Weisman and Cheryl L. West.

Director Rikki Howie Lacewell guides this voyage of vignettes with a skillful hand and a keen eye. While some of the pacing—especially in Act One—was a touch stretched beyond what I’d like to see in a monologue show, the emotional beats were all there, well-discovered by this multi-talented cast of actors. Also of particular note was the expert staging of this piece. The space—a three-quarter thrust performance area with two giant poles on either side of the downstage—is not always the easiest to work in. However, Lacewell maps out natural movement patterns that feel easy and use the whole playing space to great effect. Doing this while making sure everyone is clearly seen and heard from all sides is impressive and indicative of her experience level and creativity. Nicely done.

The set, designed and decorated by Madeline Morman, is a cute patchwork-type display of photos, phrases, artwork, and children’s toys & posters. These items work together to paint a picture of both the chaos and the beauty of a parent’s life. The many pictures provided by the cast and production team of their own families and friends sprinkled throughout the design proves a wonderful idea and one that instantly sets the tone. Speaking of setting a tone, another great choice is the musical playlist running before the show starts. Such songs as “Mama’s Hand” by Queen Naija and “Rainbow” by Kacey Musgraves give the audience settling in a taste of the themes to come—a clever and effective touch.

The performers of Motherhood Out Loud must be commended for taking on such a task as this production. A monologue show is not always easy and there are some unique challenges to face as the actor. For starters, everyone is responsible to breathe abundant life and energy into each chunk of text they are assigned. Tones change significantly from piece-to-piece—some feel like melodrama and some feel like sketches right out of Saturday Night Live. In addition, all individuals had to play a few different characters of various ages and backgrounds which often required the use of more than one accent. While these obstacles might get in the way for some monologuists, I can happily report that this amazing cast is more than up to the challenge and jump most of the hurdles on their course.

Without giving too much away, I want to mention some standout moments for each of the talented performers onstage. Cheramie Julianne Jackson (“Insightful Mom”) sets the tone of the show from the very beginning in her monologue “Squeeze, Hold, Release.” I particularly enjoyed the humorous bits about how to handle one’s own parents interfering as you come into your own as a parent yourself. Jackson paints the hopes, stresses, and fears of a new mother with bright colors and seems to truly understand the material she’s working with. I also very much liked her take on the monologue “Nooha’s List”—look out for it in Act One.

B. Wallace Shearer as “Postpartum Mom” gives us a look into the nursery as a baby struggles to sleep and a mom struggles to keep her wits amidst a sick husband and a floor for a bed. This actress knows how to deliver the funny and keeps us giggling as the show progresses going from the aforementioned restless mom to a snooty lady with a juice-box to a 12-year-old trying to understand her great-grandma and beyond. And, speaking of funny bits, Laura Adams (“Supportive Mom”) lives up to her name and adds support to many of the scenes in this show, offstage and on, always adding a touch of fun when she does so. One instance of particular note is in “First Day Fugue” as she revels in having the house all to herself once the kids go back to school.

One of my very favorite monologues “Queen Esther” was delivered with skill and perfectly-varied emotion by Mara Rosenberg as “Woke Mom.” I don’t want to give much away but I will say I a tear came to my eye a couple times throughout this touching and heartfelt story. It is a piece about the need to let your child live their truest life and the undeniable loving bond between a mother and their child no matter the circumstances. An impressive performer, Rosenberg strikes an emotional chord that continues to reverberate long after leaving the theater.

Right after this, the monologue “Baby Bird” [a piece by the brilliant Theresa Rebeck] is played with passion by Shemika Renee. As “Southern Mom,” Renee tackles a few different roles in the show, all with the charm and wit of a graceful lady of any of the Southern states. Taking on the parts of an adoptive mom, an experienced mother-in-law, the mom of a class valedictorian, and a great-grandmother musing on her life, this actress skillfully infuses each of her characters with something special—a level of heart and warmth not to be matched.

As the only male member of the cast, MarQuis Fair as “Forever Mom” captures the nervous excitement of a dad-to-be in his standout monologue “If We’re Using a Surrogate…” Fair tells of how he and his partner became the parents of a little girl. Another great acting moment for this performer comes in Act Two’s “Elizabeth” about a son’s struggle to cope with his mother advancing in years. Playing against the multi-talented Pamela Northrup (“Dramatic Mom”), Fair finds a great balance of comedy and drama in this scene, and shows the love a son has for his mother as caretaking roles reverse.

Going back for a moment to Pamela Northrup, she has some brilliant instances in Motherhood to show off her well-honed acting chops, one of my favorite being “Threesome.” This piece, about a mom letting her child go as they head off to college and beyond, gives us a look at what a mother really faces when this time comes. Ms. Northrup’s expressive face and ability to convey emotions from moment-to-moment are wondrous to watch and always leave me amazed. She is a generous scene partner and is able to connect with her co-stars believably and with the utmost grace. Always a treat to watch.

As “Rainbow Giraffe Mom,” actress Meg Nemeth has a unique task in her monologue “Michael’s Date.” She recounts a tale about a mom raising an autistic son, voicing both characters and switching between them seamlessly. Her take on the young man feels authentic without ever feeling forced or offensive, and she is to be commended on such a feat. No doubt it was challenging to strike the exact correct balance in this character and she does so respectfully and skillfully. Also of note are her snooty mom character in “New to the Motherhood” and little girl in “Baby Bird”—both are very funny and well-played.

Speaking of well-played, hats off to Temple Fortson who takes on the role of “Everyone’s Mom” with brilliance and a great deal of honesty. In her moments during “New in the Motherhood,” Fortson gives a humorous but down-to-earth look at a young parent’s life on the playground, navigating not only her son’s misadventures but also the other not-so-nice women she’s subjected to. In “My Almost Family” and “Stars and Stripes” we see Fortson play real people dealing with some of life’s more challenging familial dilemmas. She does so with the perfect balance of wit and drama, leaving the material well-acted and the audience impressed. Great work!

So take a couple hours to check out this exceptionally well-staged, well-performed production. Director Lacewell has put together an amazing troupe of actors, each one unique and bringing their own special gifts to the table. Motherhood Out Loud is sure to leave you with a few laughs, a few tears, and a glimpse of what being a mother is really all about!

Motherhood Out Loud plays through November 10, 2019 at the Greenbelt Arts Center— 123 Centerway in historic Greenbelt MD. For tickets call the box office at (301) 441-8770 or purchase them online.