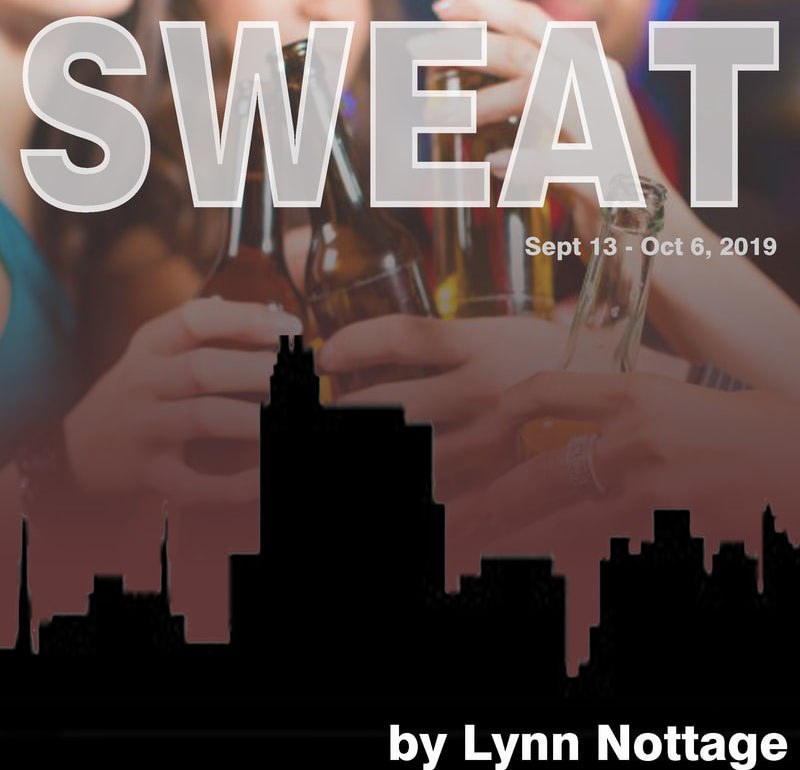 As Bodhi (Patrick Swayze) said in Point Break, “It will sting a bit, but, uh, it’s for your own growth, bro.” Sweat written by Lynn Nottage, playing at Spotlighters Theatre, is the slap in the face that we need. It does what we all too often fail to do when it comes to a political or social issue; it humanizes the situation. We read the paper, watch the news, scan social media, and right away we form opinions based on our beliefs or life experiences. How often do we take the time to dig deep and see how what we are quick to jump to conclusions about actually affects other people? Truth is, chances are if we don’t have skin in the game, we don’t care.

Director Darlene Harris bravely takes the helm and safely guides us through the turmoil that is Sweat. Harris forces us to meet the enemy and he is us. Her understanding of the material is brilliantly conveyed by her actors. She could speak at a meeting of Apathetics Anonymous and bring them to tears. Harris has a gift of bringing forth emotion from even the most hardened of hearts.

Alan Zelma has constructed a set brings you into the story. Most of the scenes take place in a bar and you feel as though you are at a table next to the players. With the help of Lighting Designer Al Ramer, and Stage Manager Tess Bierk, Zelma’s set easily and quickly transitions to the few other locations in the play. Bierk’s team works fast and unobtrusive to the flow of the show.  Ramer sets the mood beautifully by capturing the ambiance of a local watering hole.

Sweat is the story of three longtime friends, Jessie (Amie Bell), Cynthia (Sharon Carter), and Tracey (Margaret Condon) who have worked together over twenty years at the same factory. When one of them gets promoted to management, and the factory begins laying off workers, friendships are tested, and lines are drawn.

Bell, Carter, and Condon can best be described by the Latin phrase “omne trium perfectum” everything that comes in threes is perfect. Like the three primary colors, they boldly stand strong and alone, but when mixed they make everything better. Even when we were kids Schoolhouse Rock told us that “Three is a Magic Number” and the magic that these ladies produce is mind blowing.

Cynthia’s son Chris (Rhysheem McGirt) and Tracey’s son Jason (Jack Wefso) also work at the factory and are best friends as well. McGirt delivers a believable, heartwarming performance. The transformation of his character from young radical to that of a remorseful man is well acted. Wefso excellently plays that loudmouth friend we all have. You know the guy that you just can’t help but like, yet he always seems to get you in trouble. His performance is steady, and he does not waver from his beliefs. Wefso is strong, sometimes too over the top, but he does not lack conviction and delivers a fine performance.

The gang hangs at a bar near the factory that is run by Stan (Steven Gillilan) with the help of his bar back Oscar (Alex Pecas). Gillilan in a word is phenomenal. From his accent, to his walking (his character was in the Vietnam War, an accident at the factory, and has some years of hard life in him), to his constant movement. He was never stagnant and kept cleaning or pouring, or just staying engaged and I love that in an actor. Everything he did on stage was spot on.

This may be a strange simile, but Pecas was like Chinese Food. He would come on stage and shortly after his exit I found myself wanting more of him. His portrayal of Oscar was calming, confident, and full of the American Dream. Pay close attention to him because if you take nothing else away from your viewing of this show, it should be living like Oscar will make the world a better place.

It is fairly common that actors play multiple roles in the same show. What is not all that common is the way in which Timothy Andrews does it. Andrews tackles the roles of Evan and Brucie. There was not much difference in his costuming or makeup for each part, but each part stood out. It took me, as well as most of the audience, awhile to figure out it was the same person. His acting is really that good. Evan was direct, boisterous, opinionated and hardened. Brucie was amazingly acted and eerily real. This is an incredibly strong cast and for Andrews to deliver a performance that stands out like this is quite an accolade.

The one glaring mis-step in the show is the fight scene. Honestly, the build up to it was incredible. There was so much tension in the air. You know it’s coming, and you can’t wait. I mean you are on the edge of your seat with anticipation and when it happens you find yourself looking around asking other audience members, “Is that it?” It was like going to the harbor for fireworks, getting food, listening to the band, and then when the big moment comes, they launch a bottle rocket and thank you for coming.

Bottom line is Sweat is an amazing piece of writing, staged by a team of actors and production staff that are unbelievably talented and should not be missed. It is heavy at times, and funny at times, but it is the gut check on our humanity that we all need from time to time. I highly recommend this show!

Be prepared, the show runs longer than the advertised 2 hours and 20 minutes.

Sweat plays through October 6, 2019 at The Audrey Herman Spotlighters Theatre— 817 St. Paul Street in the historic Mount Vernon neighborhood of Baltimore City in Maryland. For tickets call the box office at (410) 752-1225 or purchase them online.