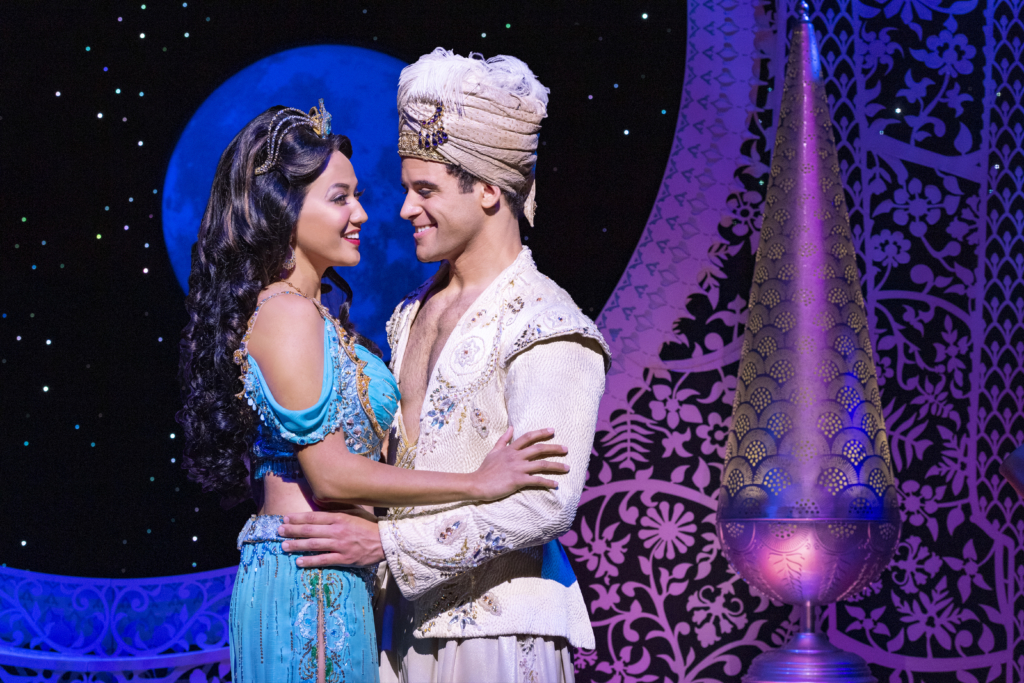 Well Ali Baba had them 40 thieves, Scheherezad-ie had a thousand tales! But DC, you in luck, ‘cause on your stage— you got a Disney show that never fails! You got some Disney in your Opera House, it’s the summer show, it’s set up camp! The Kennedy Center’s punching with pizzazz, and all you’ll wanna do is rub that lamp and you’ll get— Disney’s Aladdin! Direct from Broadway on its National Tour, the iconic full-length animated feature classic has received the bippity-boppity-Broadway treatment and is now appearing live as a stage musical. Camping out in The John F. Kennedy Center for the Performing Arts’ Opera House Stage through Labor Day weekend, this childhood classic tale is Disneyfied and will delight young audiences, those young at heart, and everyone in-between. It’s a whole new world of magic, just waiting to be lived.

“It’s the book that you knew, with a small twist or two, but the changes they made were slight” to quote directly from Howard Ashman, Chad Beguelin, and Tim Rice’s lyrics. The tale of Agrabah— the place with more glitz and glamour than any fictional city in the world— of Aladdin and his lamp, the princess and her willful ways, and all of the rest of the fond Disney tale audiences remember. Mostly. You won’t find Abu or Rajah herein; they’ve been replaced by Al’s three buddies— Omar, Babkak, and Kassim— a slight nod to the completely unmemorable Aladdin & The King of Thieves trilogy sequel film. And Rajah has been replaced by three charming and beautiful handmaidens to the princess. Forgivable shifts in narrative, especially as Omar, Babkak and Kassim come with their own micro-side plot and several musical numbers. The glaring failure in Chad Beguelin’s book is the missed opportunity of Aladdin’s backstory and more importantly his mother. For all the emphasis put on “Proud of Your Boy” and its multiple reprises, which ultimately seem to shape Aladdin’s motivation for changing his ways, the fact that Aladdin even had a mother that died is barely a blip on the radar. Blink with your ears in the opening sequence of exposition and you’ll miss it entirely.

With Disney comes the expectation of greatness. And while this production of Aladdin does eventually deliver, the initial illusions of magical grandeur are inconsistent and a bit subpar. Scenic Designer Bob Crowley and Illusion Designer Jim Steinmeyer fall out of sync early on when it comes to the magic, but all is readily forgiven by the time the audience is shown The Cave of Wonders. Truly jaw-dropping and astonishing in its breathtaking nature, you’ll forgive the slipshod slight of hand nonsense that has led up to that point in the show. And any fault you may find anywhere within the technical design of the show (be it Natasha Katz’ lighting or otherwise) will be completely erased from the mind by the time the magic carpet appears for “A Whole New World.” That flawlessly floating figment of dreams coming true is the signature hallmark of a Disney production and Steinmeyer and Crowley do not disappoint.

Crowley’s set is somewhat of a deceptive mystery. When the sand dune backdrop rises to reveal the marketplace of Agrabah in time to the opening musical sequence of “Arabian Nights” the chills of childhood shoot up your spine and you’ll find yourself hypnotized. Indescribably magic is Crowley’s set alongside the saturated jewel tones of Gregg Barnes costume design. Try and pick out one costume that isn’t sparkling with sequins, twinkling with glitter, or rolling in reflectors. Maybe Aladdin and his cronies’ initial street outfits, but those get lost in the fray of fabulousness that Barnes parades throughout the production. Again, defying description in the most glorious and awe-inspiring way possible, Barnes’ costumes are the magical stuff Disney dreams are made of.

Dizzy and disorienting, Casey Nicholaw’s choreography follows the steady course of Disney magic, far surpassing expectations with its mesmerizing moves, though after a while you’ll notice a strong, stagnant hand of repetition. While the spinning ballyhoo of “Prince Ali” deceptively lulls the audience into thinking some wondrous dance routine is occurring, where Nicholaw definitely does not disappoint is the big Act I break-out number, “Friend Like Me.” With a full-company tap-routine, Nicholaw readily makes up for the lackluster disappointment that comes later in “Prince Ali” (cleverly disguised at the end of with a streamer-confetti canon so that you still feel wowed) by keeping every minute of “Friend Like Me” filled with all sorts of dancing delights. “Arabian Nights” is a close second when it comes to “dance number of the show” and the fancy footwork featured among the quartet of friends in “Babkak. Omar, Aladdin, Kassim” is a nod to old-school Vaudeville stylings with an Arabian twist.

With vocals as dazzling as the mesmeric colors that saturate the costumes and scenery, the ensemble carries strongly through numbers like “Arabian Nights”, “Friend Like Me”, and “Prince Ali.” Princess Jasmine’s three attendants— a bit like a refined and more intellectually spirited version of the “silly girls” from Beauty and the Beast, at least until they meet Aladdin’s three friends— have particularly beautiful harmonies and backing vocals to add to “These Palace Walls”, Jasmine’s only solo. Keisha Gilles, Liv Symone, and Annie Wallace don’t appear much in these roles but the supporting harmonies they lend to this number are impressive.

Master of nefarious and shady dealings, Jafar (Jonathan Weir) is a textbook Disney animated villain. Creepy but not too scary, unsettling but rather comically and not ever truly dangerous. Weir’s vocals are not the strongest, but as Jafar only has the one big duo in the first act and a brief solo reprise in the second, it is a fact that can be overlooked for his keen comic timing. The squawky little sidekick, Iago (Reggie De Leon) is quite another matter. He’s diabolically adorable, with proper homage paid to his character’s avian heritage, and really masters the shenanigans of his “sidekick villain” role. There are times when De Leon’s comic force is a bit over the top, but the audience seems to enjoy him all the same. He adds spooky backing vocals to “Diamond in the Ruff”, Jafar’s big breakout number in the first act.

Ever much the tertiary comedic relief, Babkak (Zach Bencal), Omar (Ben Chavez), and Kassim (Colt Prattes) are the wonky trio of witcrackers that are Aladdin’s best friends. Bencal’s character in particular wins over the audience with his insistent food references and hunger-puns. Their comic achievements are at times over the top, but well-received by the audience, particularly when they arrive as a part of Prince Ali’s entourage, which gives a deeper level of meaning to the idea of wishing to be a Prince to woo Jasmine’s hand. The trio plus Aladdin are fleet and fancy of foot when it comes to dancing their way through “Babkak, Omar, Aladdin, Kassim” and put their vocal prowess to the forefront during “High Adventure.” There is a surprising amount of heart in Bencal, Chavez, and Prattes’ performance, particularly when making amends with Aladdin after situations go awry.

Whilst packing punch and pizzazz into the personality of Genie, Major Attaway’s singing and dancing fall short of what is expected from the enthusiastically engaging Genie of the lamp character. While he does have an extraordinary voice, which welcomes the audience to the show with “Arabian Nights”, Attaway’s voice tends to fade out, crack, and fall short when he’s exhausting his energies all around the stage during numbers like “Friend Like Me.” This becomes somewhat problematic as occasionally words are dropped and humorous lyrics get lost in the fray. Attaway does possess phenomenally cosmic powers— of audience interaction and comic precision— which makes up for most of his faults in this fashion.

With a spirited will or willful spirit, Kaenaonālani Kekoa as Princess Jasmine is the harbinger of the new-age Disney Princess. No longer desperate damsels in distress, Kekoa imbues every bit of Jasmine with strength and determination, whilst balancing her existence as a princess trapped inside the palace walls and her father’s rules with a sweet temperament. The wildly enthusiastic elation which courses through Kekoa’s portrayal of Jasmine in the marketplace is thrilling. Her solo feature, “These Palace Walls” readily showcases her vocal capabilities as well as her character’s deepest true feelings. The chemistry that unfolds steadily and readily between Jasmine and Aladdin (Clinton Greenspan) is, much like many elements of the production, the stuff of true Disney dreams. Everything from Kekoa and Greenspan’s meet-cute in the marketplace, through their duet in “A Whole New World” to their fairytale ending, is the epitome upon which Disney miracles are made.

Keeping one jump ahead of himself all throughout the performance, Clinton Greenspan is a genial and heartfelt Aladdin. His voice bares striking vocal resemblance to the original animated character, which is comforting to those who remember well the impact that film made upon their sonic memories. But there is a vivid brightness to Greenspan’s personality that well-serves the character of Aladdin. As he hops all around the stage, particularly during “One Jump Ahead” there is an exuberance that radiates throughout his voice and his physicality. “Proud of Your Boy” and its multiple reprises showcase Greenspan’s heart in earnest and his overall congeniality in the role is a perfect match for the slight reconfiguration of the Aladdin character.

So come on down, stop on by, hop a carpet and fly to the Opera House stage of The Kennedy Center this summer— if for nothing else, the cave of wonders will truly dazzle you. It’s a family-friendly production that will take you away to a whole new world, this summer. Disney’s Aladdin is more than just a diamond in the ruff, it’s the breakout Broadway tour of magic that needs to be seen by audiences just like you.

Aladdin plays through September 7, 2019 on the Opera House Stage of The John F. Kennedy Center for Performing Arts— 2700 F Street NW in Washington, DC. For tickets call the box office at (202) 467-4600 or purchase them online.

An American in Paris at The Kennedy Center

Chess at The Kennedy Center
Close