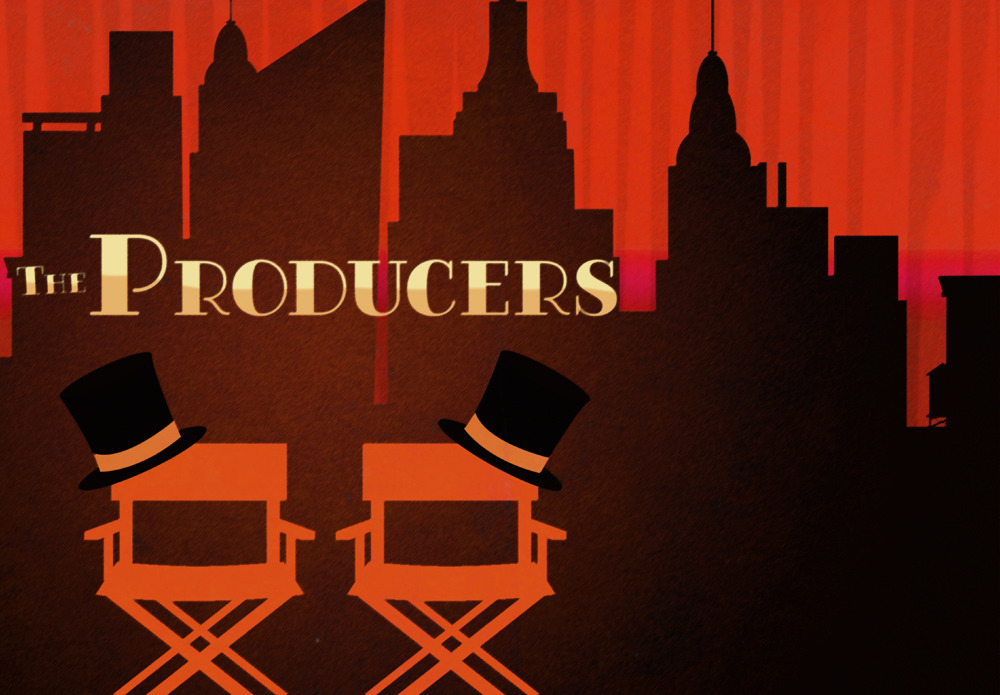 They can do it! They can do it! And they know it’s gonna work! Third Wall Productions’ current production of Mel Brooks’ The Producers, that is. Despite some last minute directorial changes, the show must go on and on it goes with Director Amy Haynes Rapnicki freshly at the helm. This production of that zany comedy about Broadway producers, with Musical Direction by Patty DeLisle, Choreography by Jillian Arnold, and Orchestra Conduction by Andrew Zile, is flaunting their extremely talented singers and actors— because when you’ve got it? Flaunt it!

Despite some technical hiccups and a directorial switch-up, with Amy Haynes Rapniki stepping in just a week before opening night, Third Wall’s Producers is a solid show that features a great many talented performers, giving enthusiastic and energetic performances from start to finish. The pacing is spotty and inconsistent throughout the performance, but this appears to be owed to the emergency directorial switch-up and will improve as the run continues. Lighting Designer Jim Shomo seems to have taken Max Bialystock’s line “…I mean you, sir, go berserk!” to heart, as the show’s lighting is some of the most over-the-top and regrettably distracting in recent history of Third Wall. The Third Wall venue presents its own challenges when it comes to lighting, but Shomo missed the ballpark on this one, with lights focused too low and too high (often hitting the front row pews or the way-back-above-the-stage Jesus hanging over the altar) and overloading many of the musical numbers with intense colors, moving gobos, and patterns. If you can get past the lighting, and trust that the pacing will correct itself as the production grows, you’re in for a good show.

Set Designer Atticus Cooper Boidy, alongside Set Builders Jordan Hollett and Pat Rudai, and Set Dresser/Scenic Artist Amy Rudai have really managed an impressive scene scape for this production. Bearing the hallmarks of a true Third Wall set, (with little hidden Easter eggs all throughout the set…take a look inside the safe of Max Bialystock’s office…or at the “Pennywise Circus Crate” just to name a few…) Boidy, Hollett, Rudai, and Rudai have created something really special on the stage. The sliding, pull-out walls enable quick scenic transitions from outside the theatre to inside, and the special rotating block sign for the various shows is also an impressive feat. Properties Designers Mike Zellhofer and Emma Hawthorn even rig up a very special pigeon coop for the scene on the rooftop featuring Franz Liebkind.

Andrew Zile’s pit had some bumps along the way; there were moments of music not catching the actors and vice versa as well as some over-play moments where even the microphone system, which comes with its own set of challenges, couldn’t balance out the volume. This was mostly whenever Ulla had solos, which was unfortunate, but hopefully with another week of shows under their belts, the production team and pit can correct this issue. Zile does manage to create strong sounds from the pit and for the most part, clean ones, which improves the overall musical experience. Be on the lookout for Zile’s hilarious cameo, however, as it too has become a lovable signature of a Third Wall Production performance.

The ensemble of The Producers (Kelsey Albert, Bill Bisbee, Eve Carlson, Anthony Case, Mike DeNicolis, Cece Heck, Lizzy Jackson, Allison Kenyon, Linda A. Kibbe, Maggie Mellott, Anne Pallanck, Nick Ruth, Paula Smith, Joe Weinhoffer) give this production that extra firm grip of a glue that any Mel Brooks’ musical needs. Standouts to look for include Nick Ruth as Mr. Marx, the CPA in the scene immediately preceding and interrupting the “I Wanna Be a Producer” musical number, and Eve Carlson as “Hold Me Touch Me” one of Bialystock’s little old ladies! Both Ruth and Carlson make exceptional acting choices in these cameo roles. As doe Cece Heck, who filters all throughout the production, but never more memorably than in the courtroom scene as an old lady. Watching her chew background scenery makes some of the show’s larger issues forgivable. Kelsey Albert should also be commended for her perpetual radiant smile, which never falters whether she’s dancing, spinning, or simply standing still on stage.

Of course the gaggle of goofballs that fill out Roger Elizabeth DeBris’ entourage warrant their own special set of praises. Anne Pallanck as the frumpy Shirley Markowitz, lighting designer, is a hoot. Anthony Case as the over-energetic choreographer…youngins, avert your eyes!!! Bill Bisbee as the effervescent costumer makes up for his ridiculous looking wig with a swishy sashay in his hips. But stealing the thunder, and giving the two queens of Roger’s penthouse duplex a run for their crown is Joe Weinhoffer, who fills out his sass, flare, attitude, and leather in ways that utterly defy description. Weinhoffer turns up later in the “musical within a musical” and really scene-steals his way through those bits as well, making him worthy of a few extra “standing ovations.”

Where does when even start when it comes to J Purnell Hargrove and Max Wolf? I mean, Mel Brooks said it best, I guess? “The leading man, he was so gay, he nearly flew away…” because Hargrove and Wolf basically steal the show, turn it right round, right round, and make this the madcap nonsense adventures of Roger DeBris and Carmen Ghia. Nobody’s going to upstage Hargrove’s Roger, nobody. But watching Wolf try only heightens the antics, pushing both himself and Purnell further over the top— practically into the outer-space realms of caricature— and basically makes “Keep it Gay” and every other occurrence that features the pair the winning moments of divine comedy in the production. Purnell is channeling some serious ferocity and Wolf is matching him line for line. Between the shrieking exits, the hilarious flirtations, the frantic effervescence, and all the severe sass— who wouldn’t absolutely love these two paired off together in these roles? Special props to Wolf for his frantic flitting about on the top deck of the stage, trying to flip down those Nazi flags in true cobbled together fashion, which speaks volumes to what Max Bialystock and Leo Bloom are trying to achieve. And Hargrove earns all the accolades for his singing, dancing, and serious milking of uproarious moments like “Me? Play Hitler? Seriously? No, I mean seriously.” You might just die laughing if he doesn’t bust the scene and crack up first.

Wesley Kenyon is another stellar performer in this production, stealing the show from our two namesake principals. With his rigid intensity, his Franz Liebkind is a proper scream. Smooth vocal sound, impeccable German accent, and seriously unsettling attitude, Kenyon makes the audience watch his every move. Between “Der Gutten Tag Hop-Clop” and “Haben Sie Gehört Das Deutsche Band?” he’s really putting it all out there. On the other hand, so is Clare Kneebone as Ulla, but in a completely different way. She’s got flawless charm, a sweet disposition, and a mesmerizing smile that compliments her vocal styling perfectly. It transforms the number, “That Face” into something literal, because who couldn’t fall for that face? Her accent is also spot on, a rarity for anyone playing the Ulla character as the Swedish overtones assigned to the character often go a step too far, almost into mocking territory. This is a trap that Kneebone steers far clear of, and ultimately wins over Leo, Max, and everyone in the audience because of it. And watch her dance moves in “If You Got It? Flaunt It!” They’re a scream!

Leo (Henry Cyr) and Max (B. Thomas Rinaldi)! Up off their backs! Pulling through a production and a half when it comes to being The Producers. Rinaldi presents a wayward and aloof Max, which is perfect for the way the character bristles against Leo and for the way Max is experiencing and exposed to the little old ladies of New York City. When they duet together there is something familiar about their blended sound, which makes numbers like “We Can Do It” and “Prisoners of Love” sound warm and invested. Try not to lose your breath when you watch Rinaldi bust his way through “Betrayed.” His comic timing is sharp.

Cyr, who channels the nervous ingénue energy of Leo Bloom with unwavering consistency, is a charming delight and the perfect foil for Rinaldi’s Bialystock. Cyr gets a great many chances to showcase his vocal prowess, including in numbers like “That Face” and “Leo Goes to Rio.” His physical comedy is quirky and spastic, all falling in line with the textbook characterization of Leo Bloom. It’s his “I Wanna Be a Producer” that will have you falling in love with him as a performer because he nails it so thoroughly, from dance moves to burning desire to vocal sincerity. He works the number over with excellence and really gives that “Big Finish” a kick of panache.

A great many congratulations are owed to Director Amy Haynes Rapnicki for swooping into the production at the last minute and to the incredible cast and crew who have worked tirelessly to get the production off the ground. It may not be perfect, but this I’m telling you, sirs! Supporting their talented efforts and go see The Producers!

The Producers plays through May 12, 2019 with Third Wall Productions at St. Thomas’ Episcopal Church— 1108 Providence Road in Towson, MD. Tickets are available for purchase at the door or in advance online.