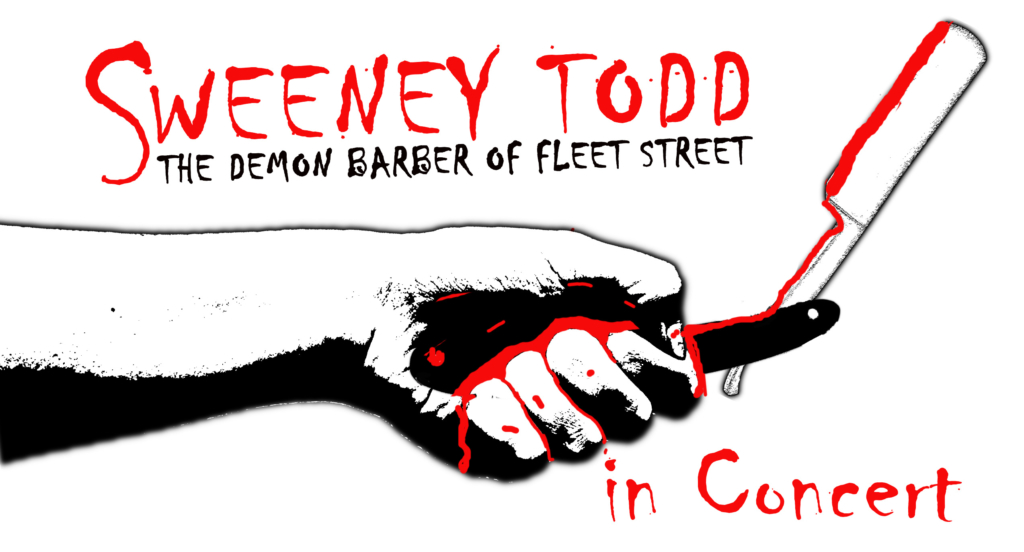 Attend the tale of Sweeney Todd. The opening line should be enough to entice anyone to visit this dark and bloody Sondheim event at The Heritage Players. The second in their annual “musical theatre concert” series, this year’s devious stage offering is none other than the bloody demon barber of fleet street. Sweeney Todd, Directed by John Gary Pullen with Musical Direction by David Zajic, and Vocal Direction by Sharen Camille, features a stellar live orchestra and some very impressive stage talents.

While there is no comparison for scenery and overall use of blocking, Sweeney Todd feels much more like a pared down concert version than Heritage Players’ first concert-production, Titanic, which debuted on the stage last season. Director John Gary Pullen seems to shy away from the overall blocking of the show, though does an excellent job of keeping the ensemble tucked away off-stage except for when they are needed. Though this does bring into question the use of the chairs for the ensemble, as they are left on the stage (taking up a great deal of it) often vacant. Ironically enough, however, this creates an unusual concept of storytelling— noting the absence of individuals on stage leads one to believe that the framework for this production might be as if the audience were viewing it from inside Sweeney’s mind’s eye.

David Zajic once again brings a phenomenal orchestra to the table. If one were to close one’s eyes during the performance (though this is not recommended as there are live actors on the stage) one might feel as if they were attending a grand symphony, the orchestra is that sublime. Just shy of three dozen orchestra members, Zajic conducts a lively pit that really breathes an exuberance into Sondheim’s score. Of particular note as the strings featured in the orchestra, as they recreate the eerie and haunting strains of sound for which Sondheim is well-known. Violinists (Concertmaster Natalia Vlaimirova and Naomi Chang Zajic, Jon Louthian, Paul Li, PJ Manganaro, Kate Mankowski, Chris Nibali), Violists (Kyle Gilbert, Andrew Nixon, David Vinson),  Cellists (Deborah Chen, Elizabeth Davis, Jen Retterer), and Bassist (Al McLaine) are all to be commended for their sublime work with their strings in this production. Mandee Ferrier Roberts, on piano and organ, is also to be commended for her stellar talents, particularly when it comes to acting as a live-harmonium (they literally bring her on-stage like an enchanted object from the Beast’s castle to play the on-stage ‘harmonium’). Roberts’ delightfully felicitous fingers make excellent work on both organ and keys for all of Sondheim’s vastly complex score.

Zajic manages to create a surprising balance of sound, despite the noted issues with sound-tech that The Heritage Players often experience. With the orchestra completely unmasked and unveiled at the front and center of the stage, Zajic commands an impressive sense of understanding when it comes to keeping the orchestra heard but not over-played. Despite the mics for the on-stage actors, sound is a challenge in the space, one which Zajic tackles with rigorous aplomb. The ariose sound that permeates both stage and audience is an aural treat for everyone involved with the production from performer to audient. Vocal Director Sharen Camille adds to the balancing act that ultimately creates strong, equalized sound between the orchestra and the ensemble. Camille’s work with the ensemble results in stellar group sounds for all of the varying instances of “The Ballad of Sweeney Todd.” Nathan Hendrix deserves a nod of praise for his duet of one of these ballads, featured alongside a principal player.

Knowing full well that this performance of Sweeney Todd is ‘in-concert’ the sounds of the show are sublime. There, are however, some acting choices (or lack thereof) that ultimately detracted from the performance. When absorbing this production, focus heavily on the vocal superiority of the singers, the sensational sound of the orchestra, and ultimately the blending sounds of both, and the performance will feel justified. Sweeney Todd (James Gilbert), for example, has an intense sound to his performance, filled with technical perfection to hollow fault. Gilbert, who is perfectly capable of singing the score and does a resplendent job in making the notes sound glorious, is rather flat in the emotional connection to the character. This does not feel like a deliberate choice on behalf of Gilbert or Pullen (in an attempt to distance Sweeney Todd from his reality from his own existence) but rather a lack of focus on the character’s existence as one with pathos. This should not deter the audience from enjoying the impressive sound Gilbert creates in the role.

Wacky and invested, Kay-Megan Washington’s Mrs. Lovett is overtly emotional and creates attention-drawing points of comedy and severity in equal parts to balance out her incarnation as the principal female character in the production. Her renditions of “By The Sea” and “The Worst Pies in London” are sublimely balanced with her enthusiastic and well-sung voice and her lively gestures and facial expressions. Each interaction that Washington presents, be it with Sweeney Todd, The Beadle, or young Toby, creates a strong connection from her character to theirs, making her stage time thoroughly enjoyable.

With a flagrant series of wild accents, Joey B. Light tackles the character of Adolpho Pirelli with a flair for the dramatic. Light’s bright falsetto and top range is a treat for his major solo, “The Contest” and the tail-end of “Pirelli’s Miracle Elixir.” Matched in vocal prowess by the enigmatic Davis Wootton-Klebanoff, playing the upstart young Toby, Light makes this performance a thoroughly enjoyable one. Wootton-Klebanoff, as young Toby, delivers a versatile performance in the role, engaging the audience in his character’s trajectory, which shifts vastly from the point at which we’re introduced to him— “Pirelli’s Miracle Elixir” to the show’s dark and harrowing conclusion. Light and Wootton-Klebanoff incidentally create a dark bit of humor together during the second series of “The Contest.”

Dark and ominous, are The Beadle Bamford (Seth Hench) and Judge Turpin (Daniel Plante.) Hench finds cute humor in playing with the aforementioned organist, Mandee Ferrier Roberts, when she is brought to the stage to play live as the harmonium during “Parlor Songs.” Hench also brings a lovely, and oddly enchanting— hardly words one expects to associate with a character like The Beadle— sound to his sung portions of “Ladies in Their Sensitivities.” Plante’s Judge Turpin is appropriately revolting. His deep bass sound is perfectly suited for the score as written, and the villainy which infiltrates his singing voice for the oft difficultly disposed of number, “Johanna” (the self-flagellation version) is brutal and haunting. Despite Plante’s struggles with the physicality of the character (in attempt to make himself appear older than the actress playing Johanna, so that the father-guardian/daughter relationship looks more authentic) Plante masterfully handles the score and his overall vocal execution of the character in this show.

A rare treat is seeing the often ‘cut-scene’ featuring The Beggar Woman (Lauren DeSha) toward the show’s conclusion. DeSha has one of the most gripping acting moments in the production. When she enters the tonsorial parlor in the final series of musical moments and spins around, half crazed with memories that may or may not be real, it is sublimely telling and gobsmacking. Hearing DeSha sing that haunted melody is as delicious as watching her madness kick in all throughout the earlier segments of the show, when she sings and madly capers around both Anthony and Sweeney Todd.

It’s the winsome relationship between the show’s two ingénues that ultimately carries the production to success, lifted on the wings of the phenomenal orchestra. Rachel Sandler as Johanna and Caleb Brooks as Anthony are theatrically indulgent as they invest themselves in both the characterization of their roles and the musicality of them. Sandler possesses a siren’s soprano, perfect for the role of Johanna. What’s more is her technical use of her stellar vocal instrument, particularly in her marriage of emotional investment and breath control during “Green Finch and Linnet Bird.” Her racing duet with Brooks, “Kiss Me” is as intriguing to listen to as it is to watch. Their chemistry, not in the least bit subtle, is a driving force behind this production. Brooks, as the ever-effervescent Anthony, is driven both vocally and in his stage presence, giving a surprising depth to the character of the young sailor. Together, Brooks and Sandler give the audience a sensational series of performances all throughout the production.

Sincerely worth it for the orchestra alone, it is impressive the way The Heritage Players continue to persevere when it comes to mounting their “in-concert” musical theatre series. Sweeney Todd plays a limited engagement, but is well worth attending for the musical experience alone.

Sweeney Todd plays through March 10, 2019 at The Heritage Players in the Thomas Rice Auditorium of the Spring Grove Hospital Campus— 55 Wade Avenue in Catonsville, MD. Tickets can be purchased at the door or in advance online.

Titanic: In Concert at Heritage Players

The Ship of Dreams Sails with Heritage Players: An Interview with David Jennings and David Zajic
Close