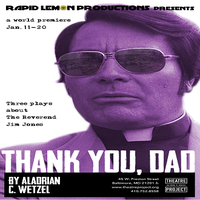 In a world exploding with fake news, the facts often get lost in the chaotic flurry of excitement fluttering all around the story. And even when the facts are straight forward, they don’t tell the whole story. The facts here are straight forward. On November 18, 1978 over 900 people died in the Jonestown agricultural commune in Guyana; over 300 of them were aged 17 and under. The murky story and history, swirling around what is often recognized today as the Jonestown Massacre like an ominous and foreboding fog, sheds little light on these facts. Mass murder, massacre, suicide, revolution, such terms are flung about by analysts, historians, religious types, and then some when it comes to examining this historic event from America’s not so distant past. But at the center of it all lies one man: demagogue Jim Jones, better known by his followers as Father or Dad.

In a recently commissioned work, Rapid Lemon Productions explores in a strikingly haunting and prescient fashion the nature of extremism is a powerful leader with their current production of Thank You, Dad. Written by local Baltimore playwright Aladrian C. Wetzel, Thank You, Dad functions as three short story-plays aligned together to chronicle the experience of Jim Jones, a true historical figure who was at the epicenter of the People’s Temple of California and ultimately at the core of the Jonestown Massacre in 1978. True to their mission of cultivating new work and challenging both themselves and their audiences, Thank You, Dad is as unsettling as it is fascinating, presenting in essence what Jim Jones believed himself to be— a radical incarnation of The Messiah there only to save his people.

Whether or not you have an awareness of Jim Jones and The People’s Temple and all that happened therein, Rapid Lemon Productions’ new work is suitable for all levels of knowledge. Though as with all theatre pieces, it should be embraced with an open mind. This piece in particular sets forth a challenging overall expression of this larger than life persona, this all-powerful leader, this demagogue who bares frightening resemblance to present day national leaders.

Dramaturgically speaking, playwright Aladrian C. Wetzel captures a tantalizing scope of Jim Jones in the way she pulls his words together, molding them, shaping them, aligning them with her own style of dialogue. Writing a one-man show is a challenge in and of itself; writing three short one-man shows that adequately and intriguingly displays the transformation of that man through three critical phases of his life is quite another, but fortunately it is a challenge at which Wetzel flourishes and conquers.

The only point of faltering in the show’s production at current is the way in which the audio overlay of recorded voices is used. Directors Donna Ibale, Chara Bauer, Justin Johnson, and Lee Conderacci utilize pre-recorded voices (featuring the vocal talents of Jennifer Danielle Alexander, Chara Bauer, Zipporah Brown, Tina Canady, Lee Conderacci, Terrance Fleming, Max Garner, Justin Johnson, Andrew Porter, Crystal Sewell, Mike Smith, Jared Michael Swain, Aladrian C. Wetzel, Dana Woodson) intermittently throughout the performance. These actors recreate words from recordings archived from the actual Jonestown experience, and while at times they are potent and quite striking, their overall use is inconsistent. There are times when the four directors place these sound cues into Jim Jones’ speech and they land deliberately, creating an external experience for Jones— a moment of pause or recollection or even just the voices he might be hearing in his own head. But there are other times when the exact same effect is used and the timing is slightly off or their landing doesn’t create the same intentional effect. The cause and solution for this problem is unclear and ultimately isn’t a huge detracting factor from the overall experience of the performance.

While the scenery is simplistic, virtually non-existent except for a strategically placed lawn chair and pulpit in alternating scenes, what happens on the drop-screen behind Jim Jones is very impressive. Projection Designer Chris Uehlinger, working in tandem with Lighting Designer Daniel Weissglass and Set & Properties Designer Max Garner, creates a myriad of images and videography that enhance the overall production experience. At times they are still photographs, other times moving historical footage; Uehlinger strikes a fine balance between the two mediums featured in his projection work and doesn’t over or under utilize either. The images and videos are well-timed, generate abrupt and coarse reactions from the audience, which augments the visceral nature of the play.

The three acts— as they are broken down— feature Jim Jones (Lance Bankerd) as he progresses through life at what could be argued as the most crucial and critical moments of his existence. “The Monkey Seller” as directed by Donna Ibale & Justin Johnson, explores the humble and more convivially earnest beginnings of Jim Jones. “The People’s Temple” as directed by Donna Ibale and Chara Bauer, is the explosive and bombastic exposition of his holier-than-God phase, the out-of-control megalomaniac on a power trip. And the third act, “Guyana” as directed by Donna Ibale and Lee Conderacci presents a finished Jim Jones, not humble, and not broken, but rather completed, as seated in his chair on the day of November 18, 1978 in the Jonestown agricultural commune in Guyana. Placing these three narrative experiences together in their chronological order paints a vivid and startling picture of the entire People’s Temple experience as viewed through the eyes of those watching. At the top of the performance, the audience is invited by Director Donna Ibale to “vocalize as you feel moved to do so” during the moments where Jim Jones is directly addressing his congregation; this is the entirety of the second and third act.

With the utmost respect in saying this, Lance Bankerd embodies Jim Jones fully. It cannot be said that he is Jim Jones, who can really be another man, but Bankerd’s portrayal is going to be the closest thing to a real-life encounter with a 2019 time stamp on it. The charisma, the passion, the intensity all culminate in a singularly mind-blowing experience that will rattle preconceived notions of Jim Jones. Watching Bankerd’s performance is disquieting; the raw exploration of humanity inside the character is as unsettling as it is intriguing. Most with a conscious might shudder to think about humanity being contained within someone who could commit such heinous acts— like leading almost 1,000 people to commit mass suicide as a form of protesting revolution— but Bankerd explores the emotional gravity and realness of Jim Jones as much as he does the psychology of the man.

Prepossessed with all the ear-markings of a tried and true snake-oil salesman, when Bankerd first marches up to the door of a lady in the neighborhood during “The Monkey Seller”, a tone of where the first act is going is readily set. But Bankerd immediately defies that tone with a surreal honesty blended seamlessly into the charisma and charm of this preacher man who comes a knocking. He is sleek and smooth, not only in appearance but in the way he speaks and presents his stories. He is physically grounded, sure of himself but not arrogant, convinced of his convictions but not narcissistic. It’s vexing and yet inviting. Bankerd carries on a fully engaging conversation, so much so that you can almost see the non-existent woman to whom he’s speaking as he genuinely peddles not only a monkey but his entire belief system. The effect is quite astonishing.

Prepossessed with all the ear-markings of a tried and true snake-oil salesman, when Bankerd first marches up to the door of a lady in the neighborhood during “The Monkey Seller”, a tone of where the first act is going is readily set. But Bankerd immediately defies that tone with a surreal honesty blended seamlessly into the charisma and charm of this preacher man who comes a knocking. He is sleek and smooth, not only in appearance but in the way he speaks and presents his stories. He is physically grounded, sure of himself but not arrogant, convinced of his convictions but not narcissistic. It’s vexing and yet inviting. Bankerd carries on a fully engaging conversation, so much so that you can almost see the non-existent woman to whom he’s speaking as he genuinely peddles not only a monkey but his entire belief system. The effect is quite astonishing.

This is a far cry from the total transformed Jim Jones that Bankerd presents in “The People’s Temple”, the second act. Fatted on self-aggrandizement, brimming with pompous arrogance and overflowing with overzealous arrogance, this Jim Jones bares not even a remnant of that in the first act. Bankerd adjusts accordingly. His physical expressions are erratic and disruptive, his movements, both physically and vocally, are exponentially intensified, increasing in quantity as well. He spends a great deal of his time booming and thundering at the top of his voice. And although his eyes, which were animated with vivacious expression during the first act, are now hidden by the iconic dark sunglasses which the real Jim Jones was often pictured wearing, there is a fire that penetrates those lenses and blazes out to us from deep within Bankerd in this act. This larger than life expression of a megalomaniac drunk on power going rogue really electrifies the audience, to the point of having their engaged responses be along the lines of those of the real members of The People’s Temple.

Bankerd again makes a full and complete transition and his third act presentation of Jim Jones is perhaps the hardest to articulate with any hope of praising his efforts adequately. This is not a broken Jim Jones nor is he humbled, and desperation too feels to be the wrong word. But this Jim Jones that Bankerd assembles, under the direction of Lee Conderacci and Donna Able, is somehow completed, somehow finished. There is a subdued quality brought to the forefront of his performance, his actions are stilled, his voice is quieted, but he is not broken or undone. The furious conflagration that was just warming up in the first act and exploded like Vesuvius all through the second act, still burns quietly inside of him, mutated and morphed for a more even bodily and vocal distribution. There is an emotional determination that drives Bankerd’s Jim Jones in this final act, which draws the show to its harrowing conclusion.

If you’re looking to kick-start 2019 with a bang, Rapid Lemon Productions has the piece for you. It presents challenging views, it presents the humanization of an individual whom many would label a monster, it presents a lot of things well worth considering in the grander scheme of things. But most importantly it readily shows audiences how easy it is to fall victim to passionate beliefs— no matter what they are— if the person preaching them has the right charisma and influence. Thank You, Dad is an evocative and frightening theatrical experience one should see before it closes after its brief 2-week engagement.

Thank You, Dad plays through January 20, 2019 with Rapid Lemon Productions at Baltimore Theatre Project— 45 W. Preston Street in the Mt. Vernon district of Baltimore, MD. For tickets call the box office at (410) 752-8558 or purchase them online.