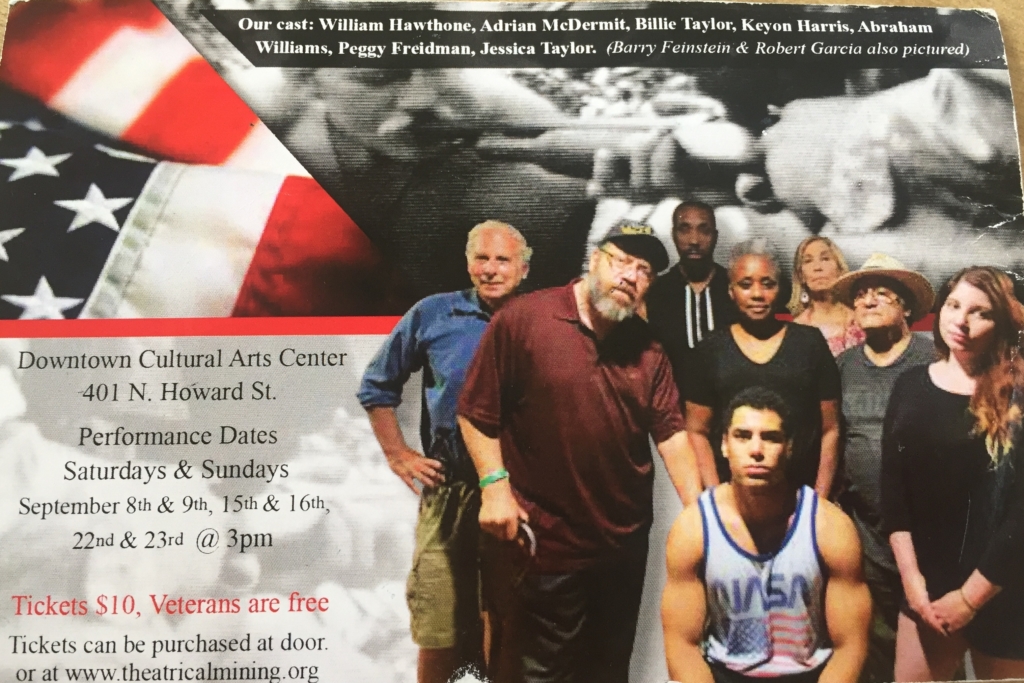 War does horrific things to people. A reality that our country is still struggling to come to grips with; we send young boys off to fight battles, to lose their humanity when they kill other human beings. They return home with PTSD, survivor’s guilt, strung-out and self-medicating, often taking their own lives. Robert Garcia’s Unlucky Soldiers is an semi-autobiographical experience of returning home from the Vietnam War and the war within himself that rages on long past the combat “in the Nam” has ceased. Directed by Barry Feinstein and presented at Theatrical Mining Company as part of the 2018 Baltimore Playwrights Festival, this powerful, personal story is rough around the edges, still in its fledgling infancy as a full-length play, but delivers a potent message regarding veterans of war and how we as a society treat them. 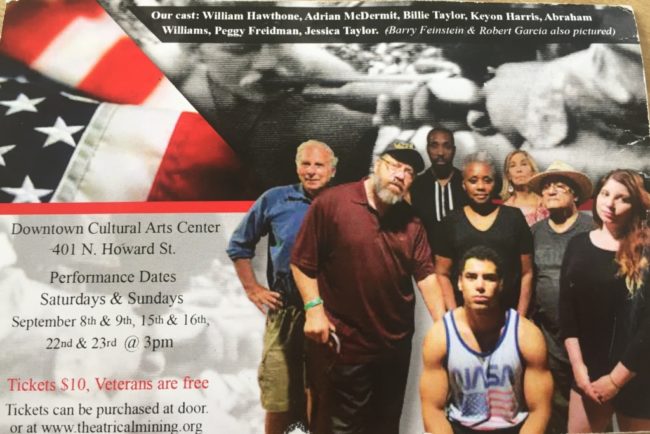 Playwright Robert Garcia demonstrates tremendous courage in his willingness to expose his own personal experience along the road to recovery as a Vietnam War veteran. The story itself is moving, albeit disjointed, and speaks from a harrowing place of truth, despite lacking the finesse and cohesive necessity of tying a moving plot together. The initial setting is unclear; there is a vague notion that Andre, the semi-autobiographical protagonist, has just returned from Vietnam, though whether the war is over or not is not made obvious. The way in which Garcia fiddles with memory, recall, and potential spiritual-realism further convolutes the exact setting as it often becomes difficult to tell if he’s actively in the present moment, which could be sometime in the midst of the war once he’s returned stateside or years after the war has ended, or if he’s simply recalling the horrors through which he lived, which actively live inside of him as daily demons.

Garcia asks much of the audience, as he creates active conversations with figures from Andre’s past first in recollection but then in real-time. As some of these characters are clearly dead it is difficult to tell the difference between what’s happening in recall and what is meant to be experienced as spirits or ghosts speaking from inside Andre’s mind. In a sense, this jumble of occurrences and conversations is an accurate expression of the maddened state of mind Garcia is trying to portray in Andre. All the voices speaking to him at once, all pulling at him from different angles of experience, all haunting him like ghosts, all possessing him like demons. Despite the impressive weight this gives the play, the overall out-of-sync nature of it creates for a great deal of confusing traffic upon the stage, especially with the limited lighting cues that come in and out of warmth and focus whenever someone from the past is called upon, be it in memory or in current spiritual conversation. Lightening Designer Charles Danforth III has the challenge of limited equipment and an unforgiving space to add to this dilemma, which regrettably only increases the perplexed nature of the play’s actions. Danforth, to his credit, does effectively use red flushes and washes whenever the Reaper character starts getting up to no good, which is essentially every time he enters the scene.

The show suffers somewhat from the overall pacing; despite its brevity in running-during, there are large stop-gaps in conversation and it is difficult to tell if this is intentionally plotted in Garcia’s script or through some intentional motivation by way of Director Barry Feinstein. With pregnant pauses and repetition, all of which could be scripted intentionally, directed intentionally, or easily a case of opening afternoon jitters, it adds to the complications of following the timeline and overall narrative of the story. In addition to this, many of the actors suffer from lack of project, and a lot of what Garcia has penned gets lost, particularly when Tech Creator Doreen Chapman plays the harrowing sound effects of war (often active gunfire from the frontline.)

All of these stumbling blocks aside, there is a compelling story to be heard here. What Garcia highlights in Andre’s narrative is the raw and brutal struggle that so many veterans who return home from war face when they come back stateside. The PTSD, the survivor’s guilt, the pain, desperately attempting to cope with what they’ve done, the lives they’ve taken; all of these demons battering around inside the heads of a Veteran to the point where they feel like drugs and alcohol are their only release is indeed a tragic state of affairs, but it is also their reality. Garcia does an exceptional job at capturing that essence, even if its disjointed and even if it reads as muddled. The characters created inside the play are raw and real: Andre himself, the drunken war-veteran uncle from one generation above, the desperately lost in her faith mother, the helpless hapless VA psychiatric, the oddly optimistic and naïve wannabe girlfriend— all of these character archetypes are well-crafted and well-represented in Garcia’s work.

The company does their best to actively engage with these characters that Robert Garcia has penned. Keyon Harris plays the deceptively suave and darkly demonic Reaper, who reads almost like a Papa Legba figure at the crossroads, begging Andre to roll the dice for ‘more time.’ Jessica Taylor is the bubbly, eager young ingénue type whose naiveties outshine the sun, while Peggy Friedman plays the worried and troubled mother figure. Billie Taylor plays the helpless VA-shrink Dr. Ann, whose dialogue is as unsettling as her helplessness. The show revolves strongly around the three main men— Andre (Adrian McDermott), Danny (Abraham Williams), and Joe Eddy (William Hawthorne) with interspersed interactions from the unsavory Reaper character.

Hawthorne is a character and a half, dispensing wisdom alongside his own problems from the character of Joe Eddy, Andre’s uncle and a Korean War Veteran who coped upon his return with alcohol. It is unclear whether or not Hawthorne’s character is dead the entire time that he’s featured or if the first series of exchanges with he and Andre are in memory and recollection while the rest are spiritual-realism. Despite this ambiguity, Hawthorne delivers a strong presence on the stage and plays well against both Keyon Harris’ Reaper and Adrian McDermott’s Andre.

While Abraham Williams, as the young enlistee Danny, is not given much spoken word, what he does say molds and shapes a great deal of Adrian McDermott’s reactions. As McDermott delves increasingly down the rabbit hole of Andre’s personal demons, the audience is entreated to a deeply moving struggle, particularly as he vocalizes and physicalizes his defensive tendencies whenever wounds get ripped too wide open for him to handle. McDermott possesses an extraordinary range of emotional capability and finds his niche on the stage in the playwright’s semi-autobiographical drama, and is the only actor who never suffers from lack of vocal projection.

Ultimately an experience worth reliving, Robert Garcia’s Unlucky Soldiers is a compelling story that’s in need of a little polishing and a little tightening. But its technical downfalls do not detrimentally detract from the importance of the story being told.

Unlucky Soldiers plays through September 23, 2018 with Theatrical Mining Company as a Baltimore Playwrights Festival production at the Downtown Cultural Arts Center— 401 N. Howard Street in Baltimore, MD. Tickets are available for purchase at the door.