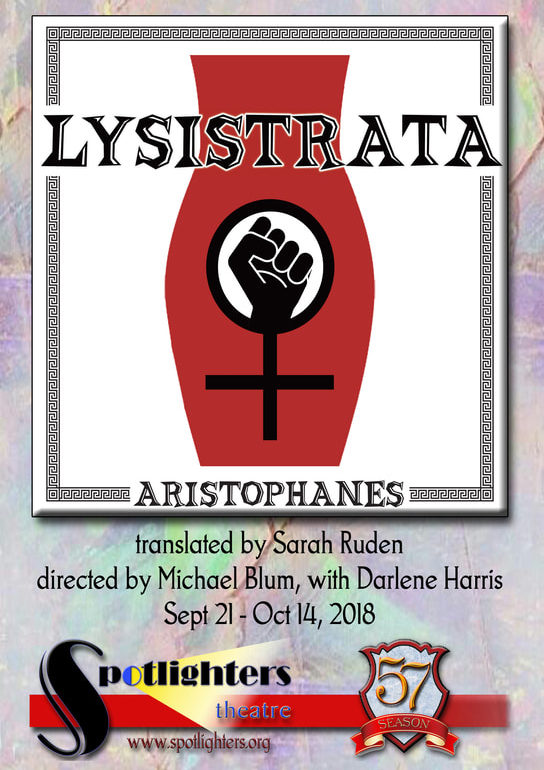 War! Huh! Good God! What is it good for? The age old question that is as relevant now as it was 2400 years ago when Aristophanes took words to parchment and penned Lysistrata. The classic Greek comedy where women hole themselves up in the Acropolis and refuse sex to the men until they end the war finds a retooling with a new translation by Sarah Ruden. Opening the 57th Season— A Season of Strong Voices— at The Audrey Herman Spotlighters Theatre, this Lysistrata directed by Michael Blum and Darlene Harris reminds us all that although vast swathes of time have passed since Aristophanes original script, not all that much has really changed in the outside world.

House Designer Alan Zemla’s set is simplistic yet suiting for the modernized translation of the production. A proud feminine silhouette stands tall against a cityscape right next to a painted acropolis, tying the timeline of then and now together, which is something Sarah Ruden’s translation struggles to do. Costume Supervisor Julia Golbey really picks up the slack where Sarah Ruden’s translation fails, creating a duality of the ‘modern woman’ in her sartorial selections for the cast. The initial women gathered at Lysistrata’s behest are painted up like happy housewives of the 1950’s and 1960’s but the moment the women of Athens take to protesting it’s all hippy togs, and feminist flare circa the protests of the women’s rights movement. Golbey does a fine job with these creations, particularly with her fortification of Lysistrata, giving her ensemble not dissimilar to that of a ‘Red Hat Lady.’

The majority of the production’s shortcomings are buried in the translation. Sarah Ruden has o’er laid Aristophanes script with crass modernity, crude language, and vulgarities that are commonplace by the here-and-now standards, and while this in and of itself isn’t the issue, it does create some problematic pacing. The concepts are modern and ancient so why shouldn’t the modern vernacular and casual use of crass terminology flow fluidly off the tongue of these actors? It’s difficult to say but the most problematic scenes come from Ruden’s attempt to imitate the ‘Greek Chorus’ element of the original show by layering in these percussive chants that lack proper rhythm and rhyme. Co-Director Darlene Harris claims responsibility for the ‘Musical Patterns’ but her execution of them is jumbled and feels constantly off-kilter. These are the most difficult bits of the show to understand even if their through line is made clear by the actors facial expressions.

The show’s other issue is a lack of volume and projection. The irony that the show opening the “Season of Strong Voices” lacks physically strong voices seems lost on no one, which unfortunately makes a lot of the snarkier and racier jokes dissolve into the space. Seasoned actors familiar with the unique postage-stamp staging of the Spotlighters space as well as newcomers struggle with this at various intervals throughout the performance and it leads one to wonder if the issue here is in Michael Blum’s direction or merely a case of opening night jitters. Regardless, the funnier lines (a great many of the zippy one-liners) are lost and ultimately this detracts from the raunchy humor that Sarah Ruden has tried to infuse into her translation.

The sole voice of power, ironically enough the woman that calls the motion to movement, is Lysistrata (Amy Heller) herself. Heller never wavers in her vocal fortitude; no matter which direction she’s facing nor what words are coming out of her mouth, she can be heard clearly and with crisp articulation, especially when the character’s emotions are raised to heightened peaks. Heller possesses a commanding presence upon the stage, a force necessary to accurately portray any Lysistrata but especially the one translated here. Acting as a beacon for the women with wavering willpower, Heller’s Lysistrata alongside Igetis (Lindsey Schrott) manage thwart the comical attempted various Athenian women…Sharon Carter’s helmet-based pregnancy coming immediately to mind.

Evangeline Ridgaway plays the Spartan Lampito and delivers a surly accent that puts a terrestrial difference between her character and the Athenians. A similar accent is delivered on John Covaleskie when he arrives near the end of the production with a raging hard problem and desperate yearning for peace. Covaleskie delivers a great scene against Lysistrata as the Councilor and plays to perfection the feeble man of power, adding to Heller’s immense stage presence. The ensemble (be they the remaining women— Sharon Carter, Melissa McGinley, Kate Crosby— or the men— Jim Knost, Lincoln Goode, Matt Mitchell) create quite a fuss when all chanting together, even if the chanting at times feels rhythmically off. Standout performers include Melissa McGinley as Myrrhine and Jim Knost as her husband Cinesias in the scene where they fiddle about in Central Park.

There is a powerful message to be understood in this production, regardless of how off-kilter the translation is. And in the current political climate where women need to seize control of their voices and stick it to the man, this is a performance that supports and empowers that sort of behavior.

Running Time: 1 hour and 35 minutes with one intermission

Lysistrata plays through October 14, 2018 at The Audrey Herman Spotlighters Theatre— 817 St. Paul Street in the historic Mount Vernon neighborhood of Baltimore City in Maryland. For tickets call the box office at (410) 752-1225 or purchase them online.