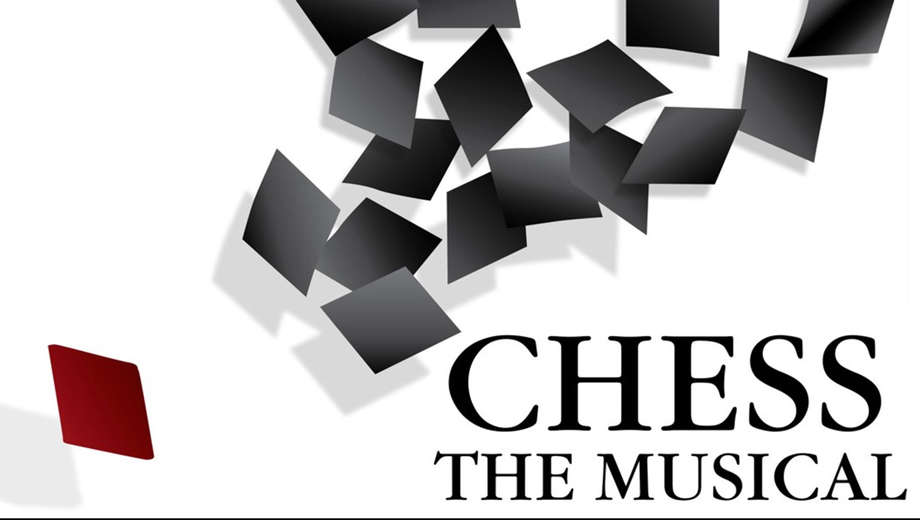 Are you where you want to be and who you want to be and doing what you always said you would? Tidewater Players, the resident theatre company of Havre de Grace, is where they want to be and who they want to be and doing what they always said they would! Making a bold move by opening their 2018/2019 season with a politically charged production of Chess (the musical in concert), Tidewater Players stands to set the tone for their season with this shocking opening gambit. Avoiding the trappings of the done-to-death Shreks and Mamma Mias, Tidewater Players takes full advantage of the darkened political climate in which we currently live, and seizes the opportunity to showcase this strikingly relevant and potent musical. Directed by Mark Briner with Musical Direction by R. Christopher Rose & Stephanie Carlock Cvach, and Choreography by Bambi Johnson, this haunting tale of political games is a raw reminder to the world that art imitates life, imitates art, imitates life. 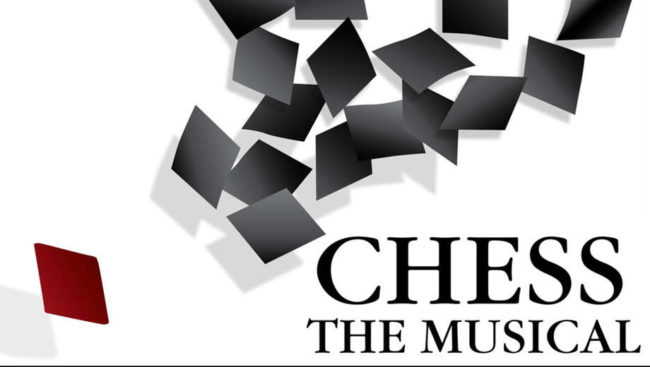 With a deceptively simple set, fabricated into existence by Director Mark Briner, the show gets underway with just the pedestal where the chess matches are played and a u-ring of concert chairs and music stands. The show thusly relies quiet heavily upon the Lighting Design of Thomas Gardner to augment the setting and create atmosphere. This is the production’s one downfall, as often times Gardner’s lighting plots are focused directly outward into the audience creating weird sightlines and blind spots when lights get brighter on stage. Garnder also falls victim to the overuse of emotional cue lighting, angry sounds with fuming lyrics are back and sidelit in red, the songs more atuned to love and wanting are side-flushed in fuschia and pink. While such techniques can be subtle enhancements to weaker librettos or even understated performers, the smack of overkill here because of the extreme talent displayed by the actors and the strength of the show’s music, lyrics, and book.

Director Mark Briner, wearing hats in triplicate as the show’s fearless leader, set designer, and costume conceiver, pulls out all the stops when it comes to the show’s sartorial selections. While the concept is one that might be expected with the musical Chess, the use of black and white costumes is done tastefully and spread evenly across the cast. Walter in white, Molokov in black, Florence in red (the color of passionate temptation); it all reads clearly as the players shift about in their own carefully blocked game of chess. Choreographer Bambi Johnson takes this concept of chess pieces on the board a step further, introducing the “Chess Ballet” (featuring Katie Webster, Josh Willig, Katelyn O’Connor, and Stanton Zacker as the Black Queen, Black King, White Queen, and respectively.) Johnson integrates these series of fluid ballet movements into the production, overlaying the dance in scenes where the chess matches are being played. This is brilliant symbolic capture of how graceful and thought-provoking a chess match can be. Johnson also gets a chance to showcase her other choreographic skills throughout the production, using various styles across the ensemble for everything from “The Arbiter’s Song” (featuring a serious and no-nonsense dance core of Katelyn O’Connor, Tigga Smaller, Madison Vaughn, Katie Webster, and Suzanne Zacker) to “One Night in Bangkok.”

Briner’s use of the simple staging allows for a delicately framed opening of the show. Showcasing Little Florence (at this performance Korie Mitchell) and father Gregory Vassy (Josh Willig) playing chess so that the importance of her love of the game is established early on, makes a clean segue into the ensemble, descending from the pedestal one solo line at a time into their concert ring of chairs. It all flows forth from there in an extremely passionately tension-driven series of songs. Briner’s ensemble possesses the vocal tenacity of a great many beyond their numbers, filling the intimate stage with thunderous sound, particularly during “Press Conference”, a number where their thinly veiled judgmental abuse masquerades through the song as journalism. A solid nod to Justine Quirk, whose voice is particularly powerful in this number.

Chess may be the game, and the players may be key, but it’s all a political puppet show where Walter de Courcey (Aaron Dalton) and Alexander Molokov (Terry D’Onofrio) hold the strings. D’Onofrio delves deep into the depths of his baritone-bass range to achieve the sound expected and required of Molokov, laying thick a Russian accent into his spoken word to create a fully convincing character. Dalton, who is polished with subtle political villainy, much the same as D’Onofrio’s character, creates an unsavory individual out of Walter as D’Onofrio does with Molokov. The pair are ruthless but clandestine in their approaches, with D’Onofrio getting multiple chances to showcase his singing voice, “Quartet (A Model of Decorum and Tranquility)” as well as “The Soviet Machine” coming to mind.

Bobby Sullivan is The Arbiter and he knows the score! His narrative introduction during “The Story of Chess” paves the 64 squares of chaos that is about to unfold in the tale. Strident in his arrival during “The Arbiter’s Song”, and fierce with vocal severity, Sullivan convinces the audience early on that he is the law, despite also being the observer, and will swiftly deliver justice as it falls throughout the performance. Most notably, despite being predominantly spoken, Sullivan’s move-by-move delivery of “The Deal (No Deal)” is a gripping explanation of the players as they make their plays to change the game as we know it.

Cock of the walk and unafraid to express the sheer arrogance of Freddy Trumper, Rob Tucker strolls into “Merano” slathered in smarm and self-righteous smugness, never once flinching in his pompous presence. With a killer voice, Tucker roars and rages at the top of his tenor range, dabbling into that soul-piercing counter-tenor sound, through all of his musical numbers; each blasted and belted line and verse, surging with bitterness and a frenzy of fury. Even when Tucker reenters the second act, for “One Night in Bangkok”, he doesn’t lose a drop of his cavalier pretention, still smug and smarmy as ever. There is a raw realness to the rogue character that Tucker explores inside Freddy Trumper, and there’s even a fissure through which the audience can glimpse the character’s tortured humanity. Tucker embraces a sliver of vulnerability, albeit fleetingly, during “Pity the Child” and showcases a complex underbelly to the otherwise aloof exterior of this bombastic character. Traversing the ever twisting track of darkness, Tucker makes good use of his shiver-inducing counter-tenor sounds, most notably during “You Want to Lose Your Only Friend?” where he jabs vocal claws like cold, unapologetic knives, directly into Florence’s heart.

Versatility knows no bounds when it manifests itself inside Anatoly Sergievsky (Shawn Doyle.) Achingly complex, Doyle masterfully navigates the role of Anatoly with a deft understanding of the character’s raw human core at the forefront of his delivery. Rendering a haunting, ethereal sound for the unsettlingly hypnotic verses of “Where I Want to Be”, Doyle draws you into the number not unlike the way Christine Daae is inexplicably drawn forth to The Phantom in the mirror encounter. But when Doyle hits the chorus of that same number, there is a spine-chilling explosion of this burbling maelstrom, steeped in a fathomless pit of unnamable dark and tortured emotions. Possessed of a glorious sound, Doyle melts hearts using the top of his tenor range during “Mountain Duet”, a song shared with Florence, and breaks souls with the sound he creates at the end of “Anthem.” Though his facial expressions are not wildly animated, they read clearly: the most stunning of them being what plays across his face when his wife Svetlana (Eileen Aubele) is first mentioned. That painful, troubling past, freshly remembered and flitting through his eyes and across his mouth tells you everything without Doyle ever uttering a word; it is remarkable.

Pity the child that leads the live Florence Vassy (Barbara Hartzell) leads. With sensational vocal sound and compassionate emotional connections, Hartzell draws forth the story arc of Florence and allows the audience to connect to her plight and to her journey. Delivering a somber yet wistful feeling during “Someone Else’s Story” there is a striking sincerity to the emotional amalgamation of Florence’s pathos that Hartzell provides in this number. Bittersweet and beautiful, each of the songs Hartzell sings creates a sense of sublime emotional fortitude, one more intensely crafted than the next. Holding her own against the vile Freddy and the impassioned Anatoly, Hartzell is demonstrably the queen of the chess board. When performing her duet, “I Know Him So Well”, with Svetlana (Eileen Aubele), Hartzell radiates as a vibrant example of Anatoly’s present while Aubele blends well as an underscored shadow of Anatoly’s past. Her reprise of “You and I”, a duet shared with Anatoly, is tragically marvelous, overflowing with that tearful melancholy of missed happy endings. Astonishing in all facets of her performance, Barbara Hartzell’s Florence becomes the perfect checkmate of this game.

Potent, poignant, and all but perfect, Chess is the firecracker that starts a revolution of musical theatre in the Havre de Grace Opera House this 2018/2019 season; Tidewater Players makes their bold opening gambit, setting the bar extraordinarily high for all the productions that follow it this season.

Without a Clue at Tidewater Players

Chess at The Kennedy Center
Close