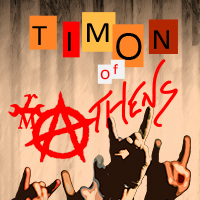 How goes the world? A loaded question if ever there was one to be asked, especially in this day and age. But set yourself back from this day and age, set your dial of existence back to 1978 in order to prepare yourself to digest The Rude Mechanicals’ latest offering: Timon of Athens. Directed by Joshua Engel, this miscreant play of Williams Shakespeare’s is finding a new lens through which to be viewed in the hands of The Rude Mechanicals. While not as beleaguered with plot-holes and glaring mistakes like some of the Bard’s comedies, nor so confused in its placement as Love’s Labor’s Lost or The Winter’s Tale, this particular Shakespearean problem-play presents its own series of issues that create multiple challenges for any company to address in their production of it.

A great many hallmarks that have over the years become signature stamps of a ‘Rudes Show’ find their way into this particular production, not the least of which is the swift rendering of the plot down to its essence so that all told, including the intermission, the production caps at under two hours. This presents Shakespeare in a palatable format for those both over and underexposed to its existence. Focusing on key plot points and highlighting characters of note is what draws the audience in; the way the Rudes do Shakespeare is not unlike receiving the bullet-points of a curriculum outline. “In-jokes” and crude humor references that play to their specific audiences are smattered throughout the performance as well, in an unobtrusive and yet noteworthy manner, allowing their core fans and followers to feel as if the show were being performed specifically for them.

Director Joshua Engel tackles the show with a strident vision that ultimately achieves the framework lens that he sets forth, albeit unevenly. Engel almost creates two separate plays of out Timon of Athens, splitting the action over the intermission. This approach to the play, however, falls unevenly on the boards as the second act is delivered with exponentially higher essences, in performance as well as in technical construction and aesthetic approach. While the costumes (conceived and provided by Spencer Dye and Linda Swann) featured in the first half of the show are outlandish, a creating a grounding point for this Studio54 party-reality of Timon’s lavish generosity, there is little else that signifies such grandeur. The set is lacking and to a degree so is the invested portrayal of Timon itself. The lack of setting could be readily justified as ‘basic Shakespeare’ or ‘theatre on a budget’ if it weren’t for the fact that the set revealed in the second act is so explosive in its visual and provocative nature. It is clear that Engel wants to show a sharp and heightened contrast between the two, and does that but the production could be better served with more balance rather than a presupposed lack of aesthetic effort in the first act and an extraordinary one in the second act.

Set Designer Erin Nealer does an extraordinary job of wangling the cast into creating the graffiti wall. The set-reveal that appears at the top of the second half is a fetid portrait of decomposition, directly reflecting the garish rot that has become Timon’s state of existence and this in itself is quite striking. It’s also plain fun to observe, especially the detailed nuances of the graffiti art and tags, but exists in a non-invasive and undistracting way. And props to Properties Mistress Magdalena Willow for all of the outrageous things she’s included in the production, particularly in the second act, to really catch the eye. The aforementioned costume conspirators, Dye and Swann, create marvelous caricatures from the costumes that they provide for the actors. Painter and Poet look ostentatious and extravagant in their glorious garments; this is also true of the lavish lamè trappings featured on Lucullus. The composed aesthetic of these larger-than-life caricatures creates the ripened atmosphere for Shakespeare’s “fair-weather-friends” thread that is strung along all throughout the performance.

Furthering the scenic shift to 1978 is the use of musical groups like The Sex Pistols, and the lesser recognizable midi-underscorings that inform scenes. Sound Designer Jaki Demarest creates a soundscape that helps to drive the action of the show. This is particularly true of the creepy violin score used from the top of the second act straight through to near the show’s conclusion. Music like this which slinks its way into the background serves to heighten the tension and further showcase the drastic difference between the atmospheres of the first act and the second act, with again a much stronger focus on things happening after the intermission. Liana Olear and Jeff Poretsky serve as the show’s Lighting Designers and follow suit with the “minimal effort in the first act for maximum impact in the second”, creating a dank and dreary lot of decrepit proportions once the shredded mattress and graffiti wall have availed themselves as scenery in the show’s back end.

With Engel’s dual approach to the production at times it is difficult to discern whether he’s pushing the play into the waters of tragedy or comedy. There is a distinct overtone of forced comedy, half-layered in with the aforementioned inside jokes, that appears primarily in the show’s first act, whereas the second act seems to subsist solely on the drudgery and decline of Timon’s laugh, with nary a joke to be heard. This furthers the imbalance of the production, though some may find the juxtaposition of the two a strengthening of one of Shakespeare’s play that is otherwise plagued with problems.

In the Shakespearean tradition of gender-blind and gender-flipped casting, the Rudes are no strangers. Tackling the titular role of Timon is Melissa Schick and much like the off-kilter presentation of the two halves of the play, Schick delivers a similarly unbalanced representation of Timon. This appears to be largely directorial, as what Schick presents in the second act is ferocious and impressive. Despite the smoking-longue jacket to create an almost Hugh Heffner personality, there is little depth to Timon in the first half of the show; Schick expresses an apathy that is almost identical to the jaded melancholy that spews forth from Apemantus. While there is a stark contrast to this milquetoast and mild Timon of the first act and the disruptive, energetically engaged Timon of the second act, Schick’s rich experience cries out to give the character more. These directorial restrictions aside, Schick’s second-act Timon is as repulsively enraged as the set is revolting, though at times her fits of fury are shouted at such volume and speed that hunks of the text are lost to the raw emotion.

Playing the disconsolate Apemantus, Lynda Clarkewallis is the indifferent cloud of reality that wafts through the scenes of Timon’s party like a blurry cloud; Clarkewallis’ Apemantus is the drafty chill of reality amid the haze of party-soaked affluence. Disrupting the rager-fantasy atmosphere of Timon’s friends, Clarkewallis imbues Apemantus with a cankerous dysthymia; there is a mellowed instance of truth in their portrayal, which paves the way for the darkened reality that arrives in the second act. By contrast, the lively and effervescent caricature of Poet, Painter, Lucullus, and Sempronius (Wes Dennis, Leah DeLano, Linda “Spencer” Dye, and Alan Duda respectively) are polished facades of fair-weather friends. Dennis waxes poetic with a firm grip upon the Bard’s words while DeLano relies on animated facial movements and body langue to fully express her character’s shallow depth. Dye, clad in the shiniest of shinies, has an Elton John pop-star flare that dominates the dismissal scene with Flavius, while Duda’s exquisitely composed Sempronius is aloof, completely vocally affected, and rather witty in a high-brow fashion.

Duda, who doubles up a word-play joke later in the production and as a physically stooped curmudgeon earlier in the production, is a good silent responder to Joe Kubinski’s Senator character. While Kubinski’s stage time is but brief, he makes the most of it and really grounds the severity of his character into his text. The unadulterated fury that is channeled through a simple scene, wherein he roars over Timon’s debt to him, is extraordinary. Erin Nealer and Claudia Bach shake up their spicy scenes as well, serving as Timandra and Phrynia, respectively. Their presences are known and felt and they add a lovely dynamic to the exchange experienced with Timon in the second act.

Versatile, compassionate, and exploring depths of a character who seems to exist outside of the world of Timon, Flavius (Laurel Miller-Sims) is the point of human contact and the audience’s gateway into this dual play of worlds constructed inside Timon of Athens. Miller-Sims creates a congenial, heartfelt portrayal when it comes to Flavius, investing each of the character’s words from a place of earnest truth. Said compassion coupled with complex vexation is what drives Miller-Sims’ Flavius forward, ultimately plowing a path between the two worlds of affluence and ruination when it comes to Timon.

If ever there was a production that highlights the core of Timon of Athens, however unevenly, The Rude Mechanicals are presenting it upon their stage at present. The second half of the show is well worth the cost of admission and will keep you engaged with the realities of fair-weather friends and how quickly the perceived notion of life can decompose around oneself once the truth has been exposed.

Timon of Athens plays through September 8, 2018 with The Rude Mechanicals at The Greenbelt Arts Center— 123 Centerway, in Greenbelt, MD. Tickets are available by calling the box office at (301) 441-8770 or by purchasing them online.

The Country Wife at The Rude Mechanicals