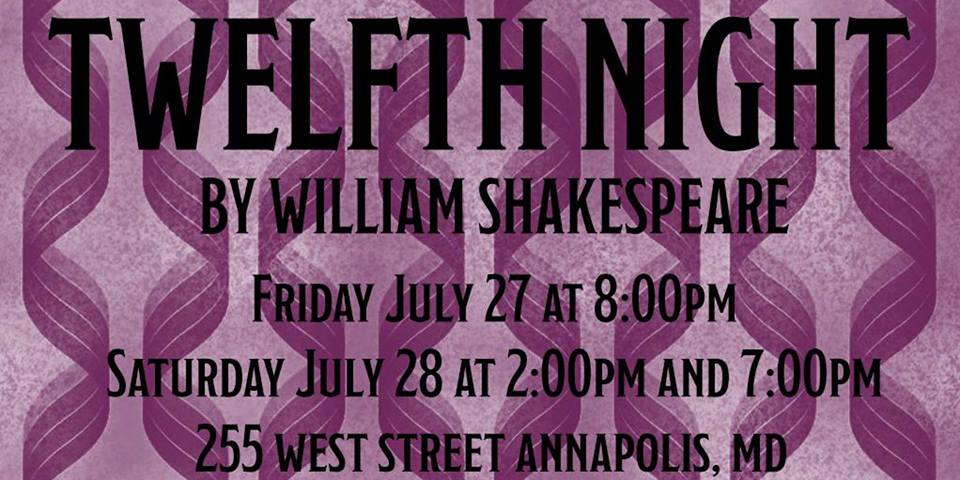 I have unclasp’d to thee the book even of my secret soul. Where lies my text? In Storytellers: A Theater Arts Academy’s bosom! In what chapter of their bosom? To answer by the method, in their current production of Twelfth Night. Directed by Terry Sweet Bouma with Assistant Directors Alyssa Bouma and Alex Foley, this true comedy of errors and mistaken identities is a fine showcase of youth digesting and transforming Shakespeare.

Storytellers and Director Terry Sweet Bouma has shifted the general location of Illyria to that of Budapest circa the late 1920’s. Alex Foley’s scenic and properties design mimics that of The Grand Budapest Hotel only with slight color variations in the aesthetic. Choosing to set the play in the lobby and common lounge of such a magnificent building creates a refreshing new take on all of the antics and shenanigans that oft accompany productions of Shakespeare’s Twelfth Night. The Duke Orsino becomes that smarmy bachelor living in one of the suits, ruling over the hotel as if he’d purchased the thing. Malvolio becomes an obstreperous and fusty old desk clerk, and so forth. With everyone constantly present on stage, the ensemble politely but engagingly chews the scenery and makes each passing scene more lively.

Initially needing to create additional speaking roles for students in the program but not wanting to alter Shakespeare’s perfect language, Bouma took the core notion of Twelfth Night— what is seen in the eye of the beholder and ther mirror image thereof— and played it into a physical reality. And thus the sidekicks were born. Sharing their characters lines (with simple line division) these sidekicks become not only mirrors and reflections of the characters for whom they are shadowing, but they create depth to all the performances happening on the stage. This is most successfully witnessed in Feste’s sidekick (Eden Logan), who is an all but silent mimicry of the Fool, as well as in Maria’s Sidekick (Anna Pasquearelli) who serves as a hotel maid, dithering about with the feather duster to further ground the Maria character in her stationed duties.

Malvolio’s Sidekick (Andrew Ball) and Olivia’s Sister (Broinninn Cummins) are extraordinary creations that add further layers of exploration to Malvolio and Olivia’s character depth. Ball, as a miniature, reflective version of Malvolio is insanely spirited and too adorable for words, especially in his mimicry of Malvolio’s mincing walk and austere behavior. Malvolio, played by Teaching Artist Alex Foley, creates a world of dynamic possibilities when it comes to interactions with young master Ball, playing every ounce of physical comedy conceivable between the pair. Broinninn Cummins masterfully arrives on scene as the petulant and bratty younger sister of Olivia, playing every bit the part of the mouthy, obnoxious little sister who just wants to emulate and be her bigger sister. This makes for divine comedy whenever young mistress Cummins pipes up with a line and gets six sorts of shot-down and shutout by the snarky and snappy older Olivia.

Other engaging sidekicks include Naomi Smith as Sir Andrew’s sidekick and Lucas Schueckler as Sir Toby’s sidekick. But Schueckler’s moment of radiance comes not from his role as sidekick to the obdurate and odiously drunken Sir Toby Belch but rather from his portrayal of the Officer during the arrest of the fair-tongued and finely portrayed Antonia (Jillian Schwartz). This scene has mild hints of chaos but young master Schueckler and the other Officer (Violet Salada) quickly gain control of the situation,  wherein young master Schueckler all but rolls Antonia right under the bus faster than the blink of an eye. Karis Schollenberger, as Valentine, the Captain, and the Priest, is quick and practiced of the Shakespearean word; so too is Nathan Kawecki in his role of the ensemble, drifting about fitting perfectly into the fabricated aesthetic of the hotel.

There be vinegar and pepper aplenty in the bunch of scurvy knaves— Maria (Juliana Schueckler), Fabian (Dorothy Boswell), and Sir Andrew Aguecheek (Lilly Foley.) Schueckler is sassy, and Boswell holds her own, particularly during all of her gesticulation in mirroring Sir Toby as he goes about setting up the challenge between the Count’s boy and Sir Andrew. Lilly Foley, as Aguecheek, is full of word and bereft of wit, completely and fully engaged in the moments as they fly at her.

A merry-making fool, or a fool of merry-making, Lauren Foley as Feste is sweetly sublime. The lyrical vocality of Miss Foley is well-suited to the singing that Feste must accomplish throughout the production, but moreover it’s her comic timing and overall presence of mind that wins the hearts of the audience. Sincere and yet well-balanced, Foley is well-hung with humors, touched with tomfoolery, and puts to use her foolish talents to earnestly draw forth the laughter that accompanies Feste into this tale.

Sheer bombacity arrives in the rowdy and cantankerously engaging Sir Toby Belch (Jeremy Crawford.) Words simply cannot due his comedy any square hope of justice. Sparked like a live wire, Crawford masters the agedness of his character both vocally and physically. Crawford, whose comedic execution is second only to Master Alex Foley (and really there’s no comparison as Alex Foley is a teaching artist) nails every moment of comedic genius scripted into the Toby character. Engaging with his character’s cane, as a physical extension of his natural comedy, Crawford is a show-stealing, scene-owning master.

Though he be but brief, he be potent, this Sebastian (Sean Fitch) of Mescaline. Master Fitch, who is the literal brother of Alysa Fitch, playing Viola, is engaging and convivial in all of his scenes, few that they be. Swift of tongue but articulate and well-paced, master Fitch is well-suited for the part. As for mistress Fitch, she well dissembles all her girly feelings once Viola goes undercover as Cesario. Equally engaged in her character’s narrative as she is with her scene work, mistress Fitch sets a firm and easy to follow example of how to lay down the character of Viola in Twelfth Night.

With great command of his moody and melancholy text, Ian Cripe transforms the Duke Orsino from a bit part in Shakespeare’s nonsensical musings into a central focal point for all things egocentric. Potently presenting the character’s gushing narcissism, Cripe makes the audience see the gleaming vain mirror of his perpetual gaze with sharply smug facial expressions and bodily animations. Smooth of patois, silken of stage presence, Cripe struts through a scene with unabashed and unapologetic charisma, worthy of Narcissus. But he’s not a mere one-trick pony; Cripe pulls out all the emotional stops in the penultimate confrontation with Olivia and Viola that steal your breath away to watch him erupt as such.

A statuesque goddess that dominates the stage the moment she wafts onto it, Audrey Kawecki’s Olivia is a mystical essence of Marilyn Monroe, Greta Garbo, Marlene Dietrich, and Jean Harlow, all spun into one mythical diva. The embodied epitome of classic golden-era Hollywood, Kawecki looks the part, sounds the part, and for all intents and purposes is the part of a Hollywood hotshot desperately seeking respite in an exotic hotel away from all the laborious stresses of the silver screen. Kawecki channels the grief for Oliva’s poor dead brother into that notion and owns every moment of her staged presence. Deliberate with every breath, spoken word, glance, and gesture, Kawecki is ferocity incarnate. A true vixen that could slay an army with a single, intensely animated glare, Kawecki gives a new leading-lady life to the Olivia character, drawing the audience into her narrative with great intrigue.

Two hours and change is all Storytellers: A Theater Arts Academy asks of your time to reinvent one of the less problematic of Shakespeare’s comedies. Their production of Twelfth Night is sure to inspire great joy in many a prospective arts student in the area.

Twelfth Night plays through Saturday July 28, 2018 with Storytellers: A Theater Arts Academy at Downtown Hope— 255 West Street in Annapolis, MD. Tickets can be purchased at the door or in advance online. Reservations are strongly recommended.

No Darkness But Ignorance- Shedding Light on Trans* Twelfth Night: An Interview with Melanie Glickman and Alice Stanley
Close