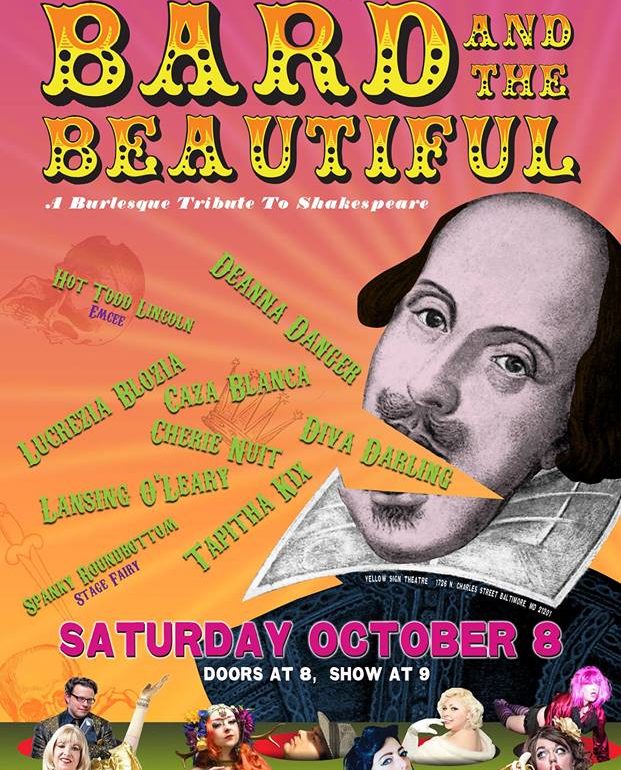 What soft through yonder window breaks? It is Burlesque! And Twisted Knickers is the sun! A strip! A tease! Their kingdom for a strip-tease! The Bard & The Beautiful brought some of Shakespeare’s finest work as it was meant to be experienced— by the groundlings with a true appreciation for beauty of all varieties— to the stage of Yellow Sign Theatre. And although tis no longer midsummer, what was witnessed was beyond the audience’s wildest dreams! There was burlesque! There was sideshow! There was a beatnik dropping Hipsterfied Bard speech! But above all there was entertainment— Shakespearean influenced entertainment and it was indeed delightful by even the Bard’s standards.

Swapping out his dapper duds for some puffy pants and tasteful togs of the Elizabethan era, TKB host Hot Todd Lincoln arrived to the stage in the most fanciful of footwear and donned the cap of the noted playwright himself, Mister Billy Shakes. Providing thoughtfully penned introductions for each of the performance acts, along with several well-tuned Shakespearean puns— and a few ripe ones tossed up from hecklers— Lincoln primed the audience for an evening of the Bard’s great many beauties. Before the halfway point there was even a taste of Lincoln’s own sideshow work— rope escape! This was made all the more tantalizing as he managed to escape the confines of the rope— tied by two volunteers from the audience in one minute and 57 seconds— whilst dressed in his smart Shakespearean suit, and did so with 47 seconds to spare!

Lincoln was not the only sideshow performer to grace the stage over the course of the evening, however. Lucrezia Blozia, in a blood bath of red lighting (handled by that brilliant A.V. Guy— Jeffrey Gangwisch), appeared in fantastical leather and began to recite the “Out ye, damn spot” monologue, a speech too-well known to belong to Lady M from “that Scottish tragedy.” Finishing the speech with “…wash your face and put on your nightgown…” Blozia rolled right into a haunting straight-jacket teaser being strapped and bound into the device, and later making a wild escape, all set to the tempo and timing of “Bloody Hands.”

This was not Blozia’s only sideshow appearance during the evening, arriving in the first act with stage partner Lansing O’Leary and giving the audience as titillating taste of A Midsummer Night’s Dream as Titania and her ‘well-hung donkey Bottom.’ The pair recited the well-known scene from the faerie-infused comedy in good working rapport with one another and proceeded to lace the scene with strong-man work. A series of stunts, including bridge holds, and the ultimate feat of O’Leary juggling while balanced precariously atop Blozia, captivated the audience and brought a whole new viewpoint to the Bard’s beautiful work.

Always mixing it up at a Twisted Knickers show, there was even a little bit of a poetry slam included in the evening’s event. Yellow Sign Theatre’s Artistic Director, Craig Coletta, doffed a beatnik beret, some sinister shades and laid down Antony’s funeral oration in the style of Lord Buckley from the infamous Julius Caesar. The experience, for those that missed out, can be viewed in its entirety below:

Of course an evening’s entertainment under the header The Bard & The Beautiful wouldn’t be such without all of the beautiful burlesque performers featured throughout the evening! Company producer Tapitha Kix set out to drown our worries with a beautiful ballet, performing Ophelia’s decent into madness, first as a brilliant ballerina and then an absolutely stunning maddened entity.

Decadent in its musical versatility, Kix’ routine featured her signature ballet on pointe tap routine as well as some surefire sassy strip-teasing, all set to “Crazy Bitch” a vastly appropriate musical choice considering th subject matter at hand. Kix returned to the stage in the second half of the show with a routine that tickled the hearts of theatergoers everywhere— shouting at the top of her lungs that forbidden title of titles when it comes to Shakespeare in the theatre and as one can imagine everything that could go wrong did go wrong for that well-planned act.

Living up to her name, Diva Darling opened the burlesque routines with a most mesmerizing act, which was indeed both prosperous and enchanting. Arriving to the stage in a bath of blue light and bedecked heavily in burlap rags, Darling took on the persona of Prospero, enchanting the audience with her mystifying movements right up until she set The Tempest upon us. Chugging a quick shot of a magical potion, Darling shed her hermit-like garb and out popped a glorious gal looking every bit the sea goddess such mythic tales might imply. Sensually invested in her strip-tease, Darling delivered a smolderingly slow seduction, eager to put all of her aquatic treasures on display.

Darling returned to the stage in the second half of the evening with something a bit more classical. The second routine, inspired by Shakespeare’s poem Venus and Adonis, featured Darling as Venus turned femme fatale. Inspired by the classic pinup beauty style of Marilyn Monroe and screen-gems of the like, Darling again invoked her sensual smoldering seduction through this routine. In a vibrant red gown of glory, Darling worked her prop fans into the routine in a feathered frenzy that was most pleasing for everyone watching.

With The Scottish Tragedy inspiring a great many hauntings in the month of October, it was no wonder that Caza Blanca focused her routine seen in the first act of the evening’s show around Macbeth’s three witches. Double, double, toil and trouble— Blanca had the audience’s blood a-bubble as she worked her way through her boiling hot routine. Layered in three dresses and masks— one for each witch with each one possessing a different flavor of sexy trouble— Blanca blew the minds of the audience with her wild and rhythmic movements. The crowning glory of this soothsaying scene was her tri-faced mask featured now the number’s end; a stylish and simply seductive element that capped off the routine to perfection. There was even a giant cauldron with special lighting effects to authenticate the experience.

Closing out the show, Deanna Dangers lived up to her name, requiring a tarp to be laid down on the floor before she took to presenting her very own take on Titus Andronicus. With a very Edgar Allan Poe look about her initial appearance (who cares if Poe came after Shakespeare, they go hand-in-hand this time of year), Dangers made a deliciously disastrous mess of her routine— chucking fancy {edible} fingers into the audience while rocking out to “Maneater” and then “God Save the Queen.” A stunt-spectacular of an ending, Dangers zapped the crowd into a frenzy which was the perfect way to close the show.

The Bard & The Beautiful played a one-night engagement on Saturday October 8, 2016 at Yellow Sign Theatre— 1726 N. Charles Street in the Station North Arts District of Baltimore, MD. Be sure to keep an eye out for the next Twisted Knickers Burlesque production, arriving at Church & Company in November.