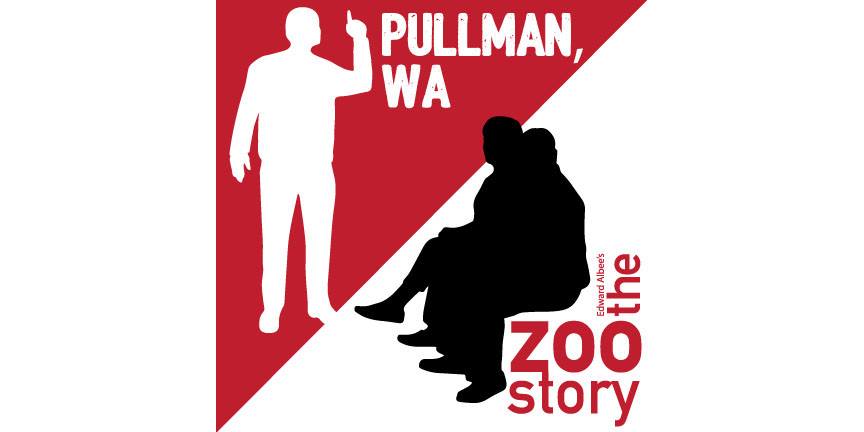 Can you believe in something or relive something that never actually happened? Do you know how to live your life? The students involved with the Academic Theaters of CCBC certainly seem intent on proving that you can and that they do, and so too can you if you attend their current double-feature production of Edward Albee’s The Zoo Story and Pullman, WA written by Young Jean Lee. Directed by Julie Lewis, this fascinating juxtaposition of realistic absurdism and absurd realism brings five exceptionally talented aspiring acting students to the stage for just under two hours of intriguing and evocative entertainment that will have you marveling over your own life choices and relatable moments therein.

Featured as a double bill with a cast of five actors in total, Edward Albee’s two-hander The Zoo Story gets the audience started for the program, followed by a brief intermission where the audience is excused for what may officially be the most efficiently executed scenic shift— led by Stage Manager Thomas P. Gardner— before concluding the performance with Young Jean Lee’s Pullman, WA. Both absurdist and strangely realistic in their nature these two darkly comedic dramatic snippets are prime real estate for the stage when it comes to showcasing a range of skills in the craft of acting.

Scenic Designer Terri Raulie keeps the set for The Zoo Story beautifully simplistic, a perfect fit for the intimate black box space. A park bench, which is weathered in its paint job as if it has stood the test of time out in Center Park, and a lovely tuft of artificial green grass beneath it to simulate the outdoor setting of the show. It’s the drapery of autumnal leaves across the backdrop, which extends into individual sprinkles of leaves along the concrete foot walk in front of the bench that gives the scene a ripe feel to it.

Adding to the aesthetic and atmospheric appeal of the first half of the double-bill, Sound Designer Jason Randolph pipes an almost undetectable underscoring of city traffic into the background as the play unfolds. The traffic is subtle, echoing the busy streets of 1958 rather than the obnoxious blare of 2015. Randolph even includes the occasional bird chirp and whisper of a warm afternoon’s breeze in his sound design, all intricate nuances that add a touch of finesse to the show as a whole.

Director Julie Lewis guides the two performers through Albee’s bizarre play with vigor and gusto. Her minor misstep in the hair-style and full beard choice of actor Charles Gearhart is the one thing that detracts from the piece as it gives Gearhart a more modern-day madman look rather than the scuzzy late 50’s bum that the script calls for. This is especially noticeable because of how crisp and sharp Tim Neil’s character is presented with his short smoothed hair tucked away beneath his hat. The difference in their societal statuses and overall temperaments is achieved so thoroughly by the students’ performances that it is a shame to have such a minor thing to detract from their stellar work.

Costume Designer James J. Fasching captures the essence of the late 1950’s in New York City with his congenial approach to style for the two gentlemen characters feature in The Zoo Story. A crisp, snappy suit complete with a navy-accented cardigan and cravat find their way to the Peter character in addition to freshly polished shoes and a very sharp trilby atop his head. Fasching takes a similar if more disjointed approach to the spastically unbalanced character of Jerry, layering him in rumples of orange and suspenders though the sentiment of the era’s style is still dominantly present.

Charles Gearhart and Tim Neil have devastatingly striking chemistry between them that is developed almost immediately once the play begins. While Gearhart’s character never stops prattling on in his frenetic and almost frantic manner, it’s the silences and contemplative reactions and responses from Neil’s character that really drive the scenes forward. The slightly unbalanced nature of their character’s existences together in Central Park is handled with a beautiful working knowledge of stranger-interactions by both performers.

Neil is a receptive scene partner, listening attentively and allowing his convivial facial expressions to speak when his character is not given lines. His mindful approach to being actively present in every moment of the show even when he’s only listening to Gearhart’s character is delivered gracefully and with a surprisingly engaging flare. Furthering the excellence of his portrayal of Peter, Neil possesses a mastery of the late 1950’s speech patterning and cadence, which leaves him sounding like an authentic husband of the times, particularly when it comes to simple one or two word responses like “Oh my.” His posture immaculately captures the essence of a well-groomed and well-raised gentleman of the 50’s; the casual lean back on the bench serving as the epitome of Neil’s understanding of the character’s physicality. Neil’s versatility as a performer is showcased by the end of the show, which will not be discussed for fear of spoilers, but note that the transformation of the character is a palpable and tangible entity that comes into play.

Gearhart undertakes the massive challenge of keeping a perpetually chatty character engaging. His unyielding frenetic energy is externalized, which is a sharp contrast to the steady and sturdy internalized energy portrayed by Neil. The fact that Gearhart channels most of this energy and excitement into his textual delivery leaving him fairly still while sitting on or standing next to the bench is mind-boggling and simultaneously fascinating. There is a maddening drive of a jumble of emotions clearly present in Gearhart’s portrayal of spastic Jerry, though just where these various emotions stem from is somewhat unclear. That is not to say his performance on the whole is unfocused, but specific emotional outbursts seem to bring a plethora of feelings to the foreground of his character’s existence without having any solid grounding beneath them. Fully embodying the nuances of the obnoxious irritant character, Gearhart attacks the absurdity of the situation, including a great many of his story-telling narrative monologues with exceptional aplomb.

Pullman, WA has no scenic design elements to speak of save for three enormous and brightly colored beanbag chairs that are pulled into existence when the script calls for it. This lack of design is intentional and allows the audience to focus more thoroughly on the absolute nonsense that unravels and bursts into a chaotic oblivion of shenanigans right before our eyes. Forget narrative, plot lines, and other linear occurrences as they are not applicable for the second half of the double-feature. Again Director Julie Lewis succeeds in motivating a captivating and engaging rapid-paced one-act to keep the audience fully engaged with what’s happening on the stage— whatever that may be in this case.

Starting off the production with a big bang of bombastically charged happy energy, Jimmy Yarsay gets the ball rolling in this absurdist reality of a show with the notion that we the audience are attending some sort of life-coaching seminar. His textual delivery of severely lengthy monologues is impressive not only because he finds the comic ground to balance upon and does so without artifice or a sense of feeling contrived, but because he adapts a tone that is lyrically dissonant to what he’s actually saying. There is oddly profound wisdom in Yarsay’s unending monologues, all of which are handled with a truly striking streak of veracity and sincerity.

In bursts Anna Steuerman, who for all intents and purposes can be labeled as cracked, whacked, and absolutely insane. The gripping enthusiasm with which she babbles out her nonsensical words is earth-shaking. Emulating a child who is so excited and bursting with enthusiasm that it just might pee if it doesn’t get to tell its tale, Steuerman engages with the audience on a level of indescribable whimsy and brutally honest cheer. When she and Yarsay start sniping at one another and going head-to-head the chemistry with which they imbue their battling is so forceful that it creates a palpable tension that resonates between them in these moments.

Balancing out these two spastically charged performances Alonzo Perez arrives on the scene like a pile of dandelion fluff that has floated down from somewhere unseen and brought haphazardly into the show by happenstance. His casual and gentle retelling of various bible and religious type allegories is strangely subduing. This is not to say that Perez does not possess his own incredibly charged energies, they just manifest differently.

The trio of performers are exceptionally dynamic in their on-going dialogues, monologues, bickering sessions, and attacks upon each other as well as the audience. The intense direct contact and engaging eye-stares from all three of them with the audience makes the show immersive and more thoroughly enjoyable. As each performer winds down into a more harrowing monologue to conclude their character’s existence, their abilities to shift dramatic tone and delivery are displayed with a rewarding sense of accomplishment. An astounding performance across the board from Yarsay, Steuerman, and Perez, the second show of the double feature is nothing short of comic genius and true theatrical enjoyment.

The Zoo Story and Pullman, WA double-feature plays through Tuesday December 8, 2015 at CCBC Academic Theatres Essex in the Studio Theatre of the Arts and Humanities (AHUM) Hall on the Campus of CCBC Essex— 7201 Rossville Boulevard, in Rosedale, MD. For tickets please call the box office at (443) 840-2787 or purchase them online.

Review: The Hero of Everything at InterAct Story Theatre