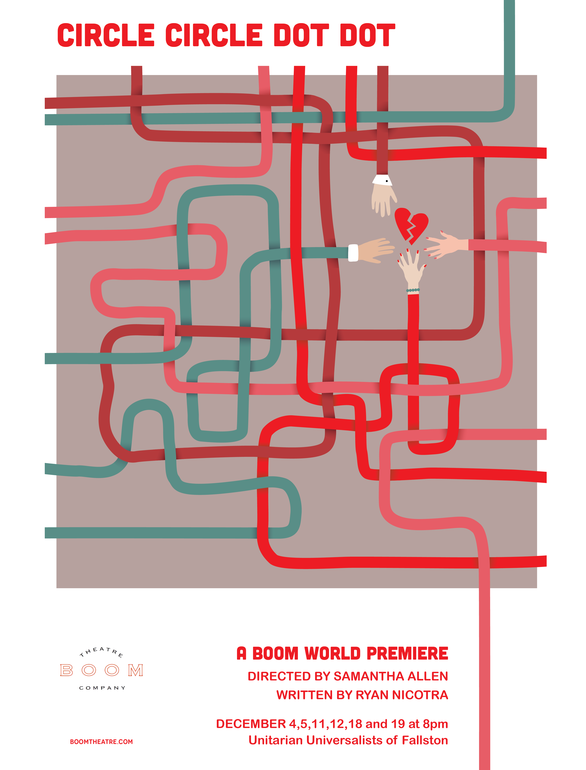 You want to have your cake and eat it too. Well don’t we all. But maybe you can have your cake and eat it too, at least when it comes to loving and feeling emotions for more than one person in a relationship circumstance. At least that seems to be the path of exploration occurring in the world premiere production of Ryan Nicotra’s Circle Circle Dot Dot at BOOM Theatre Company this December. Directed by Samantha Allen, this four-hander tracks a polyamorous relationship on the verge of collapse and explores the notions of polyamory as a newfound way to exist with love in the modern world. Sparking a conversation about the notions of polyamory and polyamorous love, Nicotra’s work gives the audience plenty to digest and think about when it comes to love, relationships, and romantically-sexual-emotional gender and preference fluidity.

True to the operating form of any BOOM Theatre Company production the production values are exceedingly simple. This allows the audience to have a surefire focus on the story itself as well as the performances being given. The downfall to this particular bare-essentials approach is that the scene changes are still scene changes that happen over the course of 30 to 90 seconds wherein actors and stage hands shuffle large furnishings in and out of the intimate space at the Unitarian Universalists church of Fallston and because of the limited lighting the transitions are visible. There is no sound design to cover these scene changes, which would have eased these somewhat awkward transitions along and given the audience a symbolic tie-in to the show. A few simple song selections— even in the vein of songs about cards and gambling as the four characters are named after the suits in a deck of cards— would eliminate the problem that these awkwardly silent transitions cause.

That said, Lighting Designer Chris Allen makes illuminating magic with a few basic cues and well-timed special effects. An eerie green glow fills the scene when Spade and Club are driving down the highway late at night with an intermittent and slow-moving flash of white to indicate oncoming/passing traffic as they drive. There are moments that are also washed in red that highlight emotions that are heightened in certain scenes throughout the production. Allen’s lighting is, unfortunately, not enough to cue the audience into the handful of flashback scenes that Nicotra has written into the script. These two scenes occur immediately after tension-driven scenes and because there is no sound design or positional shift to articulate that we’ve switched time-frames both of these scenes start off in perpetual confusion because the things being said seem to contradict the arguments and tension of the previous moment.

Playwright Ryan Nicotra has a sharp sense of well-developed characters, though his personal voices echoes somewhat in each of them, particularly in some of the sassy and shady one-line snippets that come flying out of some of their mouths. His juxtaposition of live-in-the-moment scenes verses soliloquy-fashioned asides is an intriguing one because it invites the audience into the minds of these characters as they each plead and explain their involvement in the quadrilateral relationship of polyamory in which they’ve found themselves. Two of the soliloquies— that of Diamond and Club— are precision guided to the audience, penned with exacting words to forcefully engage individual members with these characters’ plights, whereas the two soliloquies of Heart and Spade are more general inner-monologue exposed. Both of these tactics are useful in understanding the inner working of the character but read a bit cheaply as the audience should be able to draw these conclusions based on interactions the characters have with each other, rather than needing them to tell us directly.

Nicotra has a strong sense of dramatic tension and builds it accordingly throughout the script until it results in a rather explosive ending. His approach to the work on the whole is a broader glance into the dysfunction of polyamory— or the potential for dysfunction— rather than an exploration of the relationship style itself. There are a great many moments, particularly in the emotional confessions from the characters, that work exceptionally well throughout the piece but there are also moments that need tightening and tweaking in the dialogue, though these are minor. Above all, Nicotra’s work asks questions, making the piece evocative and a conversation starter.

Director Samantha Allen has an exceptional mastery of how to delineate spatial relationships across a tiny playing stage. Clearly demarcating where rooms exist by using little more than a few simple furnishings, Allen constructs a functioning reality with clear blocking choices among her actors which grounds the show in a modern and present reality, giving it a natural feel. Allen pushes the cast for emotional honesty, the result of which are deeply earnest and vulnerable moments from all four of the performers consistently throughout the show. Whether it’s Allen’s choice or written into Nicotra’s script that the performers all wear their characters’ namesakes on their skin as colored tattoos, the idea is a clever one and well read from the audience when these tattoos become visible on the characters in scene.

Heart (Victoria Scott) who is constantly dressed in red— a cute trope to reflect the notion that hearts mean love— is a vapid poptart bubble. Despite her valley-girl sound and simplicity there is something genuine in the way Scott approaches the character, filling the vacuous space of her character’s mind with love and gooey feelings for the other three members of the relationship. Don’t be mistaken, for as syrupy as Scott’s portrayal starts, as the character shifts and changes, a dark and furious entity emerges and the transition into such a state is delivered remarkably by Scott.

Club (Joshua Fletcher) bristles on the edge of perpetual anger and uncertainty. Mild mannered at first, Fletcher carries the palpable tension between his character and Diamond (Anthony Chanov) which only grows exponentially as the show progresses. When he erupts into rage and a well-choreographed fight breaks out between Fletcher and Chanov, it’s Fletcher’s direct anger that drives the scene. Not without his tender moments, the pure vulnerability he expresses in the flashback scene with Diamond is both tender and poignant.

Chanov, as the disturbed Diamond, is a wonder in the dark and twisty role. When given the chance to speak his soliloquy he delivers sharp truths that seem impossible to eloquate (meaning to articulate emotionally) but does so in earnest. Knowing that the character is bent on self-sabotage, Chanov’s soliloquy becomes that much more tragic when he pleads with the audience not to turn on him. His interactions with Spade, Heart, and Club are driven by a tension that swells from deep in his belly and is constantly churning to the surface in waves of barely contained vitriol and unintentional rage.

As for Spade (Jennifer Hasselbusch) she is the ‘fixer’ of the group who believes she can solve all their problems through talking, listening, and food, if only they’d let her. Hasselbusch is delivering her finest emotional work of the season and is the perfect fit for the emotionally upended character. With depth and precision accuracy in her delivery, Hasselbusch provides a dynamic look into a character that could otherwise be quite static and flat. Her tender affectations and whining moments of insecurity are set into the epitome of balance with other strong and harsh emotions once things go pear-shaped towards the end of the performance.

The chemistry that works between the four actors is astounding. From the opening cuddle pile on the air mattress, to the mounting tension between Diamond and Club, to the blasted explosions between them in couples and group, they share a palpable and tangible bond that draws them together and pushes them apart in perfect sync, fully and truly serving the story arc that Nicotra has written into the tale. An exceptional piece of theatre, despite the scenic changes and confusion of when flashbacks begin, the show is definitely one for the books this year.

Running Time: 80 minutes with no intermission

plays through December 19, 2015 at BOOM Theatre Company at the Unitarian Universalists of Fallston— 1127 Old Fallston Road in Fallston, MD. Tickets can be purchased at the door or in advance online.

To read the interview with Playwright Ryan Nicotra, click here.

Playing with Playwrights: An Interview with Ryan Nicotra about Circle Circle Dot Dot