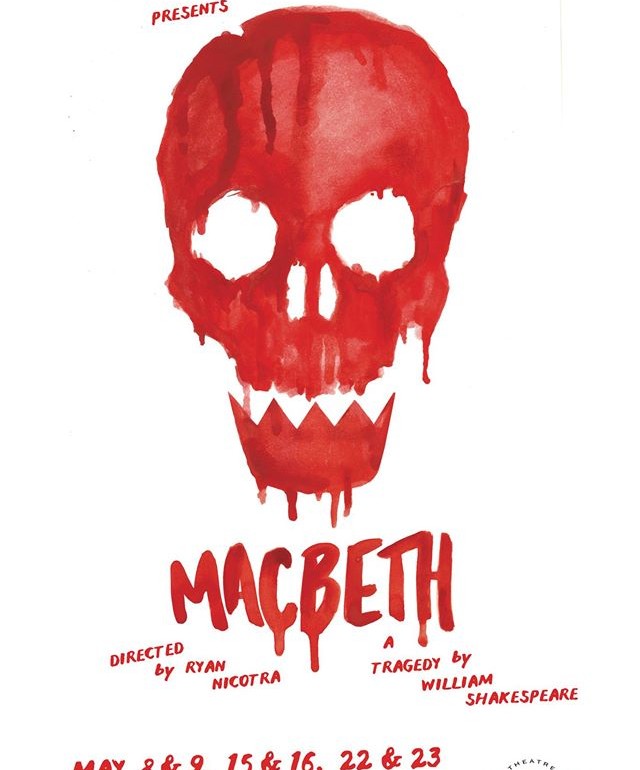 In the modern dieting trends where slimming down is all the rage even the world of the theatre could not be spared from the ravages of this new craze. Shakespeare gives us a smorgasbord of poetry and imagery; beautiful and powerful and in the new diet-approved rendition of Bard-Light: tragedies in under an hour, The BOOM Theatre Company is rendering down Macbeth to its purest essence; a powerhouse of moving and monumental scenes. Directed by Ryan Nicotra, this compacted edition focuses on the skeletal framework honing in on key monologues and crucial plot points to drive home the essence of Shakespeare’s Scottish bloodbath.

In addition to being pared down, this particular production of Macbeth blurs the gender lines of the performance’s well-recognized characters. Director Ryan Nicotra takes a twisted approach to the traditionally female-casted roles of the Weird Sisters as well as Lady Macbeth and subverts them with non-conformist casting choices. What Nicotra says in doing so may not sit well with all audiences, but it certainly makes one think about gender identities and gendergies on the whole— the energy with which a certain gender is approached and what it means physically, textually, emotionally and overall to a specific character portrayal.

The layering of Nicotra’s concept goes beyond the gender play where feminine costumes do not hide bearded men in lady’s roles. Working in the intimate found space of the Unitarian Universalist hall, Nicotra and the cast of the show— as the company works together in an ensemble fashion, collectively gathering costumes and design elements as well as running their own light and projection cues throughout the performance— play with the elements of light and darkness through a series of cleverly strung fairy lights and a few well placed red bulbs. This notion of light and darkness echoes soundly within Macbeth as it becomes a physical representation of the forces of good and evil at work.

The show moves quickly; Macbeth in just under an hour would be expected to do so, but the essence and crux of the show does not suffer for it. In a production where one takes a five-act, four-hour play and reduces it down to key components, one runs the risk of cheapening the story, or rushing with haste through critical moments. This is not the case with the BOOM production. Careful attention to detail is played and the signature moments of this production— particularly the cauldron scene with the weird sisters and both of Lady Macbeth’s infamous monologues— feel almost as if they are happening in a distorted slow-motion.

Nicotra crafts moments of visual pleasure that create a strange stir of palpable sensations and emotions throughout the performance. The shadowy finger-glow dance to introduce not only the weird sisters but the show is one of several, as is the moment the rebellion comes to lay siege upon Macbeth; be sure to glance the window to the play space’s right as this is one of the most unsettling yet frighteningly beautiful moments in the show. The collaborative ensemble effort is rewarding in this production, and under Nicotra’s trained eye, the show is well worth seeing even if the gender-confused politics are questionable.

In a show this quick it is hard to focus on minutia, but that does not stop performers like Erin Curran, who plays the bloody Banquo, from finding a precise moment to do so. Though her words are brief— as nearly all of Banquo’s living scenes are spliced out of existence in this performance (spoiler alert— Banquo dies) Curran delivers a praiseworthy moment of translating printed text into flawless action. The line addressed to her character by the title lead, results in a brutal locks-shaking that is quite disturbing, but deliciously intense to lay eyes upon.

Nicotra steps into the show, in addition to directing it, as one of the three weird sisters. Playing with Samuel Pollin and (in future performances) Jennifer Hasselbusch, the trio of performers deliver menacing chills with saucy savoir-faire in their portrayal of the fates; a portrayal whose resulting message equals nothing less than the notion “Fear the Prophets.” Pollin, who like everyone else in the production, doubles later as a murderer and Seward and finds subtle differences in each of these portrayals that help to distinguish the roles from one another as there is minimal costume work to do the task for the audience.

Dustin Horsman has the distinguished honor of taking on the controversial performance of Lady Macbeth. She is well known for her strength and her shattering madness once the play progresses past the point of no return ad Horsman brings an interesting spin to these iconic elements of her character. There is a strong dynamic shift between the argumentative scene shared with Macbeth (Sam Hayder) where it is most often read with the good lady having the upper hand. While Horsman’s initial portrayal of Lady M is delivered perhaps exactly as Nicotra intends, with questionable gendergy motives, it’s the “out damn spot” monologue that will turn the audience in favor of his performance. Delivered with harrowing earnestness, there is a raw and undeniable madness drifting merrily through each line and breath of this scene.

Surging in the exact opposite direction is the raging Macduff (Lisa Davidson) which serves as another gender-bent casting in the performance. Davidson is headstrong in the role and catches the audience’s attention toward the end of the show as ze collapses into inconsolable grief at the news of the siege to Macduff castle. It takes a split second— and in Macbeth-in-an-hour that’s pretty much all ze has— to flip that soul-searing agony into blood-thirsty vengeance and Davidson does so flawlessly, dragging an eager and energetic Malcolm (Anthony Chanov) along with zis.

Sam Hayder, as the title character, delivers a much more internalized Scottish tyrant than the masses are used to expecting. This does not, however, mean that his performance is anything less than brilliant. Wrapped in emotional layers, Hayder exposes the rarely seen psyche of Macbeth’s internal monologue. Driven a great deal throughout the performance by a lingering fear and doubt that he cannot shake, when that finally transforms to wrath at the end— the transformation is glorious as Hayder’s timid characterization undergoes metamorphosis and erupts into a terrified beast lashing out as it is cornered. Well rounded, well grounded, and well played, Hayder delivers an unconventional Macbeth that is on par for the performance as a whole and is wholly pleasing throughout the production.

Unnatural breeds to breed unnatural trouble and this show is certainly populated with unnatural, so seek to know no more from this assessment of the work and simply see for yourself the marvels and mysteries that await at the BOOM Theatre Company’s production of Macbeth.

Macbeth plays through May 23, 2015 at BOOM Theatre Company in the Unitarian Universalists of Fallston— 1127 Old Fallston Road in Fallston, MD. Tickets can be purchased at the door or in advance online.