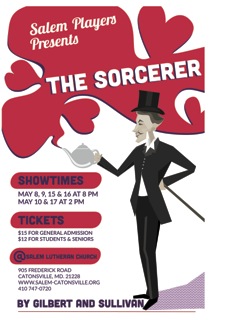 A marvelous illusion. A terrible surprise! Who knew that The Salem Players were passing themselves off as a little community theatre when in actuality they were harboring operatic talent in their repitoire? Presenting a rarely seen Gilbert and Sullivan, The Sorcerer takes to the stage at TSP and is really quite the accomplishment. The talent and voices alone that waft off that stage surpass any expectations that come to mind when one thinks of little community theatres, especially considering the difficult arias contained within the obscure G&S work. Directed by Lisa Yerkey, with Musical Direction by Sterling Gray, this rather entertaining evening is professional opera quality at community theatre price and provides resplendence for all who attend.

It should be noted that at first the musical itself is deeply expository and droll, taking quite some time to get interesting, but one cannot fault The Salem Players for the mistakes that are Gilbert and Sullivan’s. However, it should also be noted that once the shenanigans get underway, there is simply no stopping the good times that continue to roll off the stage out to the audience’s eager waiting ears. The talented voices of the leads and ensemble alike are beyond pleasant and detract from some of the slower moving points that are signatures of the first 40 minutes of any Gilbert and Sullivan show.

The set design alone, conceived by Director Lisa Yerkey and Set Designer Don Schwartz, sets the tone immediately for a night of whimsy and folly with the simple painted village green scenery that slants diagonally down into the wings. The flower-braided gazebo is a nice warming touch that further invites the audience into this quaint spot removed from time; where all Gilbert and Sullivan shows find their haven. Lighting Designer Paul Timmel deserves a shout as well for creating mood effects, night time shifts, and magic, all with a few simple shifts in color and tone of his lights. The most impressive lighting use in the show actually works in tandem with Property masters Sandy McNair and Sue O’Conner, concocting true sorcery over the cauldron when John Wellington Wells starts to concoct his mystical filter.

If the set weren’t pretty enough Costume Designer Trish Morgan completes the delicate and fanciful aesthetic with her period costumes in shiny satins and bright pastels, tempering the females and their laces against the dapper and dashing suits of the gentlemen. Picking colors that really compliment complexion and accent the individual accordingly, Morgan has the cast of the show looking simply brilliant for this period piece. The dresses are divine, the suits hint at chivalry and there’s even a top hat or two to more thoroughly embrace the aristocratic notion of being at Sir Marmaduke’s mansion.

Musical Director Sterling Gray navigates the live orchestra, which is cleverly concealed behind a panel of scenery leading off stage, through the trepidatious waters of the Gilbert and Sullivan score. The musical prowess of this piece is an enormous beast which Gray slays with vigor, fully actuating the sound and sentiment that the two great composers have crafted into one of their lesser-recognized masterpieces. Gray’s work with the ensemble and lead characters is also noteworthy as the harmonies in various duets, trios, and the quartet blend sublimely and the ensemble sports a bold and fully invigorated lively sound throughout the larger group numbers.

When love’s involved, things are never easy, particularly not once you start layering in all of the qualifiers— true, unrequited, force-by-potion, etc. Opening the show with a lovely recitative is Mrs. Partlet (Mari Hill) and her daughter, Constance (Kelly Beauchamp.) Hill’s strong classically trained sound balances the exchange between her character and her daughter nicely while Beauchamp’s character takes the higher soprano lines with a milky, teary-eyed approach. Beauchamp then leads into her aria “When he is Here” which is a lovely melancholy sentiment stirred with forlorn longing and unrequited love for the vicar.

The audience shall find great fascination with the lamentation of Lady Sangazure (Neat Lane) and Sir Marmaduke (Scott Graham.)Their untitled duet is actually one of the more hilarious moments in the production as they attempt to achieve a coy flirtatious exchange between one another, whilst pining covertly for the other mid song. Graham gallops along to the tried and true mild-patters that are often laced into the supporting role duets of the Gilbert and Sullivan male characters. Lane delivers a strikingly nostalgic aria, “In Days Gone By” which reads as a dusky and heavy dirge loaded with picturesque flashbacks painted heavily by her charming and lower range. There is a haunting morose tone that resonates in her voice when she sings, which is quickly dashed into something more cheerful when Graham’s character joins in the singing.

The poor and lonely Vicar of Ploverleigh, Dr. Daly (Jim Knost) is a side-plot at best when it comes to the overall storyline of the show, but don’t let the deceive you as Knost delivers the most powerful male ballad performed of the evening. Knost’s rich and resolute voice is a mellifluous blend of emotions and technical clarity when he opens up with “Time was, when Love and I were Well Acquainted.” There is something heavenly about the way Knost loses himself in the nostalgia of the song. All but disappearing until near the end of Act II, Knost returns with a song, “Engaged to So-and-So” This song lets his deliciously velvet voice melt over note after note with a hint of sullen humor that exposes the character in earnest. A truly revolutionary performance of unabashed talent from Knost makes this character well worth noting.

Gilbert and Sullivan dances the mind-numbing expectancy of young ingénues in love. The Sorcerer brings them to us in the forms of Alexis (David Hill) and Aline (Ashley Lane.) Both of this richly crafted characters defy the standard convention of gooey, lovestruck ingénue and deliver a meatier more grounded version of youths in love. Hill is cheeky and unafraid to push the characters beliefs that love should know no age or class restrictions, while Lane’s character is more invested in simply loving Alexis. The pair have voices that are suited for one another, matching each other note for note in choral ecstasy whenever they duet together. Hill’s final and scornful recitative aimed at Lane near the end of the show is striking and staunch with bitter emotions, a sharp contrast to the loving and tender words with which he entices her earlier in the show. Lane delivers a dulcet aria, “Happy Young Heart” with an exceptional upper range that borders on coloratura. Hill has an equally impressive ballad, “For Love Alone” which demonstrates his intense ability to carry sustains intact and on pitch.

Taking the title role, Tim Van Sant as John Wellington Wells the Sorcerer doesn’t even show up in the show until nearly the intermission but his presence is keenly felt nonetheless. The perilous hallmark of a Gilbert and Sullivan show being the racing patter song that is often delivered just before intermission belongs solely to Van Sant. “My Name is John Wellington Wells” sets Van Sant off to the races pattering along with precise articulation. It’s difficult not to be impressed with the way he snaps through the laborious task of delivering all of the heady and complex words perfectly in rhythm with the music. Sporting an impressive singing voice in addition to his pattering prowess, Van Sant is something of a vocal sorcerer, making this musical opera a sparkling gift of community theatre.

The Sorcerer plays through May 17, 2015 at The Salem Players— Salem Evangelical Lutheran Church at 905 Frederick Road in Catonsville, MD. For tickets call (410) 747-0720 or purchase them online.

The Trial of the Catonsville Nine at Salem Players
Close