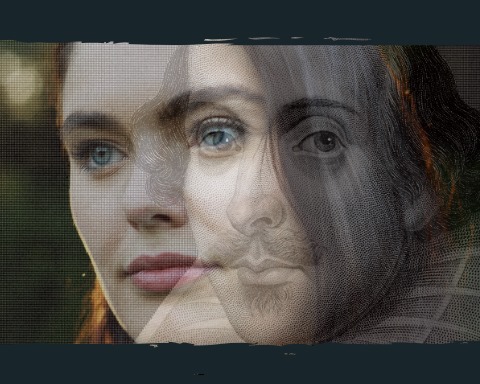 This green plot shall be their stage! And by this, tis meant the Hodson Outdoor Theatre of Hood College, unless of course it rains, and then there’s an indoor option, but speak not, yet mortals, of tempests— that’s another Shakespeare altogether! Think instead upon the season, the season of midsummer, and attend ye well to the first-annual Frederick Shakespeare Festival, presenting productions by Endangered Species (theatre) Project, and in this case the production be A Midsummer Night’s Dream. Directed by Aaron Angello, this outdoor performance of one of the Bard’s quirkier comedies— the one with the faeries— proves that the course of true love never did run smooth.

Presenting A Midsummer Night’s Dream in exquisite fashion— straight forward with minimal changes to its initial intent— Director Aaron Angello creates a thoroughly enjoyable and exceedingly well-paced theatrical experience. The opening to the performance features war-steeped choreography, wherein the men conquer the women, giving context to Theseus’ marital claiming of Hippolyta, and giving prescient focus to Shakespeare’s blatant misogyny. The play starts with the pending nuptials of Theseus, Duke of Athens, and Hippolyta, Queen of the Amazons, wherein Theseus claims to have won her by the sword. Angello creates interpretive war-based choreography to show the conquer of the women, and gives Hippolyta (Christine Mosere) much to chew upon by way of silent resistance and subtle rebuke in the opening text-based scene. Rather than bury the chauvinistic conquering qualities of the stereotypical male character crafted by Shakespeare into banal acceptance, Angello uses it as a lens through which the audience views the remainder of the male-female interactions in the production.

Costume Designer Megan Hromek keeps outdoor period pieces simple yet impressive, creating the Shakespearean illusion that many find more than acceptable. Uncredited in the program are the masterful creations of Mustardseed, Peaseblossom Cobweb. And Moth— the faerie servants of Titania. They are mesmeric puppets, looking like golems crafted from loam and bark with shrouds of foliage draped delicately around their visages. Melissa K. Gregory, Daniel Summerstay, Ian Tavano, and Corey Ahearn (who respectively also play Starveling, Flute, Snout, and Snug) puppet them swiftly with eerie, ephemeral movements. Gregory in particular mellifluously sings this disturbing lullaby, protecting the Faerie Queen to sleep, accompanied by some eerie and unseen off-stage instrumentation. The sensation created in this moment is a bit like when one creeps into the restricted section late at night, knowing that one ought not to be there, feeling scared to death and yet unable to pull oneself away. It’s fascinating.

Gregory, and her fellow player counterparts, are most engaging as performers in their odious ensemble ‘performance’ of Pyramus and Thisbe. It’s the one time you want to laud praises on how lousy your Shakespeare truly is; Gregory, Summerstay, Tavano, Ahearn, and (at this performance) George Michael Harris as Nick Bottom, have truly outdone themselves. But we can’t delve head-long into Bottom’s business without first mentioning the delectably humorous Peter Quince (Michael LaGue.) Doubling up as the curmudgeonly Egeus, LaGue gives a rousing performance as Peter Quince, affecting his vocal quality to sound something akin to Sam Elliott. It’s rather hilarious just listening to him speak, especially when trying to dampen the overly excitable spirits of the aforementioned Nick Bottom.

George Michael Harris is in a scene-stealing, scenery-chewing, comic-relief category all his own. Where does one even start with this finely seasoned and well-spiced stage ham? Harris’ Bottom is comic gold and does the show a great deal of comic relief, particularly with the dark frameup that this production has presented us. Between his epic, unending “death but not death” scene as Pyramus wherein we get shenanigans aplenty so much so that I won’t spoil them, and his general knavish nonsense traipsing about a Bottom-transformed, Harris is a good and proper hoot in this production.

Properly spirited and equally mischievous as the name might suspect, this Puck (Madeline Reinhold) though she be but little, she be wildly entertaining! Filled to the brim with sprightly burbles that explode in effervescent fizzes of movement and sound, Reinhold is her own flittering force that whizzes and zips through the expansive play space set down before the audience. It is nearly exhausting to watch her go, and the shenanigans that ensue when it comes to drawing the four lovers together near the end of the first act are uproariously laced with belly-laughing. There is a prancing pony’s energy trapped inside of Reinhold’s Puck, constantly bounding out into her person, causing her to hurl herself up into leaping-locks about Oberon every chance she gets.

Properly double cast as Theseus and Oberon, Michael E. Mason is a darkened Faerie King, though not without his humorous mischiefs that put him right in line with his own playful Puck. One could readily die of laughing when Mason sees mortals approaching, watch in exasperating chaos as he rips up grass and flings himself down into the audience. Brutish in his temper when it comes to having his way, he is a fair and steadfast match for the fiery Titania (Christine Mosere) who lays down a force when encountering Oberon. This production includes the visual aide of the changeling child, giving Mosere a deeper and more realistic connection to defend her refusal of the babe to her Faerie King, strengthening her “strong woman” position. And when they make amends, as faeries are wont to do in this Shakespearean comedy, and it comes to light that Oberon is behind her antics featuring a donkey, she chases him off with a vehemence that is most praiseworthy.

Four rogue and unruly lovers cross paths in the woods; without the help of faeries they’re already a series of bad romantic comedy situations just waiting to happen. And with a little encouraging from Puck, they become a cataclysmic comedic nightmare. Surasree Das and Megan King take up the roles of Hermia and Helena respectively while Matt Provance and Jacob Urtes play Lysander and Demetrius. Unstoppable in their energies as they bound about the circumference of the play space, Das, King, Provance, and Urtes give the audience round after round of rousing good delight, even if it is at the sake of their own misfortunes. Physically invested, this quartet come together to make the ‘raging bull’ scene wherein Helena has at Hermia and she fires it right back with the poor boys caught in the middle one of the most amusing in the production. Das and King in particularly do outstanding jobs delivering Shakespeare’s text with raging emotions, managing to still be intelligible and understood. Das is hilarious when she squeaks and shrieks, throttling herself against King and the boys. It’s an epic comic throwdown not to be missed between these four.

What fools you mortals be if you not attend these faeries and strange lovesick mortals in their outdoor green patch this summer. Quite the show, this Equity Members Project Code Production, as sponsored by Endangered Species (theatre) Project, A Midsummer Night’s Dream is the dream outdoor Shakespeare experience.

A Midsummer Night’s Dream plays through August 11, 2019 with Endangered Species (theatre) Project as a part of the first-annual Frederick Shakespeare Festival. This performance is hosted outdoors at the Hodson Outdoor Theatre of Hood College— 401 Rosemont Avenue in Frederick, MD. The performance is free, but donations are encouraged. For reservations, click here.

A Midsummer Night’s Dream at The Bard’s Wagon Players