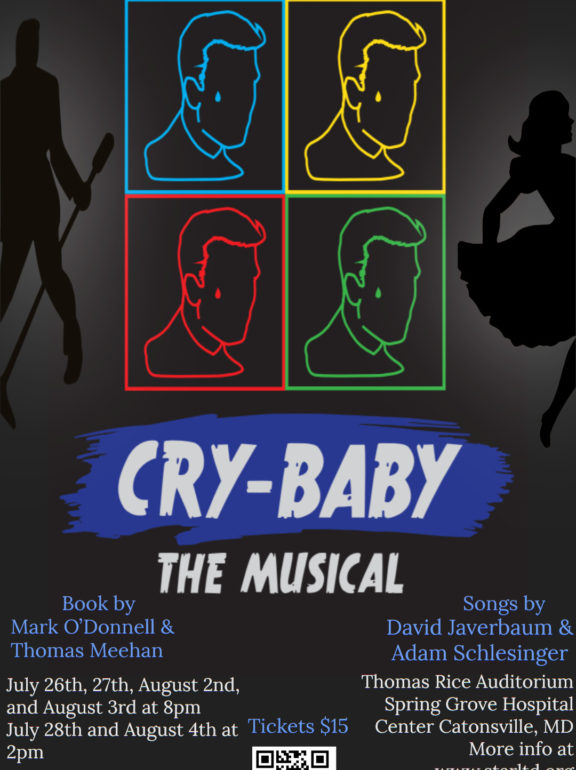 Are you a drape? Or are you a square? Nobody is too square to come on out and see the drapes & the squares facing off in this summer’s STAR Ltd. musical performance of Cry Baby! Directed by Mike Juba with Musical Direction by Scott AuCoin and Choreography by Lauren Lowell, the iconic John Waters film finds new life on the stage. With adapted book by Mark O’Donnell and Thomas Meehan, and Songs by David Javerbaum and Adam Schlesinger, this 50’s-style musical lampooned will bring you great joy as you watch the talented young performers of STAR, shake, rattle, and roll their way through the trials and tribulations of being nerdy and awkward or delinquent and bad-ass while growing up in the great city of Baltimore.

Technical Director Kevin Bochinski, and all of the STAR Ltd students who assist with set construction and painting, light board operations, etc., have achieved a fine series of scenery and lighting which really amp up the production. Costumer Cami Neary, and assistants, really fit the feel of the 50’s for this show. The dresses on the Squares and the raging, skin-tight outfits for the drapes just scream the differences between the two behavioral groups of the times. Neary finds rock-n-roll style outfits that really give both Cry Baby and Dupree that extra “musician’s edge” as well, while finding ways to keep Baldwin and the Whiffles looking super square. Props to Neary and her construction crew for the “Apple Pie” costume featured during “Thanks for the Nifty Country”; that costume is as all-American as Bazooka Lincoln.

Choreographer Lauren Lowell, and her Assistant Choreographer Nick Zuelsdorf really put the bop in the bop-she-bop-she— wait…that’s the wrong show. But you get the picture. With energetic and enthusiastic choreography suited for all dancing levels on stage, Lowell and Zuelsdorf find a way to keep the big dance numbers moving and grooving, shaking and rattling, and the finale— “Nothing Bad’s Ever Gonna Happen Again”— has the symbolic box-step-clap that signals with vigorous aplomb that the show has reached it’s “happily ever after” moment. Lowell and Zuelsdorf have fine-tuned routines for the Featured Dancers: Sarah Gonder, Madelyn Keir, Alayna Ladner, Grace Nazarian, and Claire O’Donnell in various musical numbers.

The choreographer isn’t the only one getting a former STAR Ltd. assistant this year. Serving as Mike Juba’s Assistant Director, Jack Buzard works with the company to create rapid pacing and keep the students on an even keel. Juba and Buzard have incubated a high-octane energy that permeates the performance’s overall atmosphere. There is a natural hype that accompanies the zany book; super “bad boy” type characters turning the true square “good girl’s” head lends itself to that enthusiasm and Juba and Buzard capture that sentiment and keeping it thriving and alive all throughout the production. Technical scenery and set change hiccups aside, the show moves smoothly from beginning to end, and makes for a roaring good evening of laughter and fun, up-tempo music.

Scott AuCoin’s work with both the live pit (Assistants Han Wagner and Jess Ramon, with Lynn Graham on keys, Aaron Logan on clarinet & saxophone, Chris Sisson and Neal Chakrabarti on guitars, Alex Taylor on bass and Ben Giroux on drums) and the company’s musical numbers creates an pleasant sonic impression for the overall performance. The ensemble (featuring but not limited to:

The almost psychopathically square Baldwin (at this performance James Maclellan) is as squeaky clean as his dorky costume. Maclellan is the epitome of the Cleaver children model for the perfect 1950’s square. With little spurts of energy that manifest in his physicality and his smitten intents toward Allison, Maclellan’s Baldwin is too dorktastic for words. Leading The Whiffles in various numbers, he’s quite the harmonizer, but his real vocal prowess gets a chance to shine during his peculiar duet with Lenora (at this performance MaryKate Shouse) “All in My Head.” The number itself features some of the most comic deadpan (with robo-puppet Cry Baby and Stepford-dead Allison) and a brilliant marriage of both Maclellan and Shouse’s voices. Shouse, playing the spastically strung and unstably unwound Lenora, gives a most memorable performance as the psychiatrically disturbed young lady. Her feature solo, “Screw Loose” is so over the top with hilarious antics that it’s almost the best moment in the first act, outdone only by the outrageous nonsense that happens in the big romantic duet between Cry Baby and Allison. Both Maclellan and Shouse are extraordinarily talented comedic actors and really focus their comedic intent in these roles.

Other standout performers include the too-cute-for-words Skippy (Bentley Cech), the stalwart and stern Judge Stone (Philip Lohrfink), and the cornerstone of morality, Mrs. VW (at this performance Emily Neubauer.) Prim, pristine, and polished, when Neubauer enters Mrs. VW’s big solo number, “I Did Something Wrong Once”, it is hilarious, both from a lyrical standpoint and because the audience finally gets to see the rigidly polished queen of the squares bust loose and metaphorically/lyrically let her hair down. Watching her interactions with Lohrfink’s Judge Stone is rather precious in its own right. The Mrs. VW character has quite a few humorous lines peppered throughout the performance, see if you can’t catch them all.

When it comes to bad, nobody knows it better than The Teardrops: Mona (at this performance Paige Peercy), Wanda (at this performance Kayla Sharpe), and Pepper (Sophie Turner.) Performing backup for the famed Cry Baby during his bust-out song at Turkey Point, and their own feature trio song, “Whole Lot Worse”, these three comprise the perfect tawdry trio. Peercy brings a razor’s edge to her performance as Mona AKA hatchet-face. Sharpe is sassy and snazzy strutting around as Wanda, and Turner, as the plentifully pregnant Pepper, lives up to the character’s namesake when it comes to attitude. The entire trio is blessed with powerhouse, belt-worthy vocals, and nails each of their featured numbers out of the park, especially their featured verses in “Misery.”

Dupree (Josh Olujide) is too hot to handle in the buddy-sidekick role against Cry Baby. With erratic bouts of energy that really inform the character’s punchy personality, Olujide puts his vocal prowess on display for his big rocker number, “Jukebox Jamboree.” Bouncing and belting through that song, Olujide infectiously inspires the entire “drape” population to bebop and dance all around. With smart comic timing, Olujide lands the more hysterical moments of his character superbly. When he pairs off and duets with Cry Baby during numbers like “You Can’t Beat the System” and “A Little Upset” you can hear and feel their soulful camaraderie. Olujide plays the character in an over-the-top fashion that falls in line with the overall campy nature of the production.

Sweet, innocent little Allison (Lydia Newman) is the epitome of a squeaky-clean gal. Innocent, doe-eyed, ingenue-esque, Newman’s Allison is exactly what you’d expect from the pristinely unblemished character, that is of course right up until she meets Cry Baby (Hosea Mundi.) The transition is gradual, and best experience during “I’m Infected”, which is also the first real instance in which you hear Newman’s vocal prowess. She breaks into her own deeply moving rendition of “Misery” at the top of the second act, but not before mastering her bad-girl belt all through “Baby, Baby”— a semi-duet with Cry Baby and doing the hilariously uproarious “Girl Can I Kiss You With Tongue?” The antics of this number alone, because Newman and Mundi play them with such intense sincerity, makes the camp level of the overall production rise to the peak of Mt. Cheesynonsense.

People, hold onto your seats, because when Hosea Mundi rocks onto that stage as Wade “Cry Baby” Walker, you’re going to feel like Elvis and every other great rock-n-roll legend has just entered the building. Channeling some serious rock-n-roll spirits of the 50’s era, Mundi is a rocket waiting to erupt all over the stage with his singing, dancing, and acting capabilities. With those Elvis-tuned hips, those roaring vocals— that flip between rock and belt in no time flat— and that soul-burning intensity that will rock the audience right out of their seats, Mundi was the hands down pick for this role. It’s chilling the way he roars through “You Can’t Beat the System”; that same fury fires up for his solo features in “A Little Upset” but is so restrained (you’ll understand when you see the number unfold) that it becomes comical. “Girl Can I Kiss You With Tongue” becomes one of his most passionately memorable numbers. Hosea Mundi will have you screaming and throwing your hands up in the air— and your headscarves on stage— with his wild performance as Cry Baby.

So what are you waiting for? Use your legs— you did get your polio vaccine, right? Use those legs to hurry on over to STAR Ltd. this summer and witness all the amazing rock-n-roll that is Cry Baby.

Cry Baby plays through August 4, 2019 with STAR Ltd in the Rice Auditorium of the Spring Grove Hospital Campus— 55 Wade Avenue in Catonsville, MD. Tickets can be purchased at the door or in advance online.

Honeymoon in Vegas at STAR Ltd