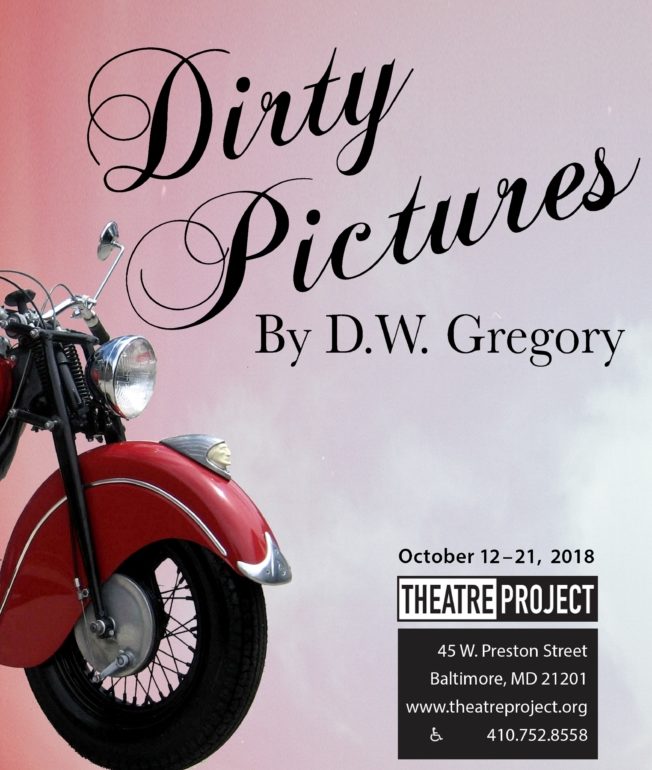 When you force the eye to see something in a whole new light; that’s true beauty. A pile of junk is just a pile of junk until it isn’t anymore; looking differently upon something broken, disregarded, or damaged can transform trash into treasure. In the world premiere of D. W. Gregory’s Dirty Pictures, art, beauty, and truth find new lights and the backwoods yokels of wilderness-nowhere Colorado absorb new perspective on what those things mean to their lives. Set in a one-horse, lost-to-time type rural mountaintop town somewhere between Fort Collins, CO and Cheyenne, WY Gregory’s new work explores the lives of four individuals in a racy kitchen-sink drama that just happens to take place inside a bar room rather than someone’s home. Deception, displeasure, and a series of dirty photographs— or perhaps tasteful artistry— unravel the friable threads that weave these individuals’ lives together. Performed at Baltimore Theatre Project as a Rapid Lemon Production, the show is Directed by Lance Bankerd and takes an intriguing look at a person’s perspective on photos, relationships, and life as a whole.

Scenically striking, the set is the connective tissue that binds audience to location. While the inside of the decrepit backwoods bar doesn’t immediately scream Colorado (the pre-show lobby gallery photography show by Photographer Stephen Hoppe, who has also contributed photos for the production’s use in-scene hones the audience in to the production’s locale) the setup immediately smacks of time gone by; the Regan autographed photo above the door to the kitchen, the antiquated jukebox and other time-stamped artifacts that populate the space, all reek of a moment that time has bypassed in a town that space has forgotten. Set Designer S. Lee Lewis coerces the furnishings into an arrangement of neutrality; not too homey, not too static, he crafts a balance in their layout which is both ornamental and functional.

For a show that has such a strong focus on light, the show’s lighting design, crafted by Daniel Weissglass is somewhat lackluster, though not in a detracting manner. Weissglass’ work is simplistic; it splits the set apart when the scene calls for it, and shows the basics of people in rooms of the bar, when a car is pulling up onto the gravel parking lot, etc. (Sound Designer Max Garner augments those movements of arrival and departure with his authenticating sound effects.) The Tiffany-glass lamps hanging down over the main bar room are a nice touch, and they appear to be functional, or at least very well rigged in disguise.

One of the show’s strongest suits is its barroom brawl, which breaks out in the back-half of the second act. The nature of the brawl can’t truly be revealed without spoiling some of the larger plot points, but it can be said that once it breaks out, it feels justified to the movements of the characters in the script. Fight Choreographer Brad Norris adds a seasoned flare of how to tumble and toss about, both two men bashing each other’s brains in and two women having a physical cat fight, that creates a verisimilitude sans danger to the performers. The fight action feels charged, looks clean and convincing, and ultimately achieves the finer explosive point in D.W. Gregory’s work where the text fails to do so.

While the story itself has an edge and the characters present as realistic, there is something missing from D.W. Gregory’s work, though it is difficult to pinpoint exactly what. There is a natural flow of action, rising and falling; there is the none-too-subtle tie-in of junk’s being viewed in a different light to make it appear as art and beauty overlaid on the lives of the individuals in focus of the narrative. But something just feels off with the work. It’s not for lack of effort on Director Lance Bankerd’s part or that of the cast as Bankerd keeps the production moving swiftly, even running argument scenes in real-time, with dueling scenes overlapping from inside the office and main barroom as they would in real life. The story lacks an imaginative edge of sparkle; it feels too real without enough to give the audience motive to desperately care about the characters’ stories.

The narrative experience and overall telling of the tale is split evenly across the four performers. Chet (Matthew Lindsay Payne), Judy (Allison Sarah Burrell), Bonnie (Chara Bauer), and Dan (Terrance Fleming) are all lively in their existence inside the microcosm of dull-as-ditch-water-not-Denver life. The relationships that are unraveled, exposed, and layered upon are expertly delivered; the tensions that rise between various pairings— as inevitably happens in a production with only four characters— feels strong and tenuous, pushing as the guiding force of the show’s drive. There is sincerity and a grounded base in each of the characters that anchor the show in a reality rather than a heightened perception of how each character perceives their reality.

Allison Sarah Burrell’s Judy is like a canker, festering away in a life not fully lived. Burrell’s physical commitment and consistency to the character’s physical ailment is impressive and worthy of praise at it draws a fortified connection between the show’s larger concept of “beauty in a different light.” The subtly of her Midwestern accent is a nice touch to the brassier persona she slips into in order to create a hardened exterior on Judy. This gritty armor that Burrell wears as Judy serves to irritate the other characters and push the plot forward a great deal.

Swinging in the opposite direction is Chara Bauer’s Bonnie. Possessed of an internal grit that is buried beneath a bubbleheaded tomato-type exterior, this character falls more in line with a bimbo stereotype, though Bauer brings a unique edginess to her in this production. The vocal affectation Bauer imbues Bonnie with is exceptionally annoying, which adds a layer of comedy to the situation, while creating a different sort of layer in the character’s persona. Her interactions with Chet and Dan are like night and day, tugging polar opposites from her deep reservoir of character performance.

Terrance Fleming delivers a commanding physical performance as Dan, initially arriving to the bar all but horizontal because of the bender he’s been raging through town on. Fleming drags his Dan through a parabolic curve of emotional traumas, exploding when achieving that peak of pathos somewhere after the second act has begun. There is an unyielding intensity that Fleming puts forth in Dan, even when the character is more quiet of body and less vocal of tongue. The dynamic is a strange one but fits into the microscopic world of what is happening in their four lives.

Matthew Lindsay Payne’s Chet is at the core of the all the action, though this could be said for each of the characters. There is something about Payne’s delivery of Chet that draws him to the center of the scene work, even when his character isn’t meant to be the focus. Perhaps it’s the fact that Chet is the narrative bookends for the play, or because he interacts with each of other characters more intensely than they do with each other. Chet is the lifeline that ties the other three together, in a sense. Payne’s keen sense of comic timing and delivery augments the minimal humor that Gregory winds into the script; often times it is Payne’s physical responses and animated facial expressions that heighten these moments of humor. His getting stuck in the kitchen-bar window comes immediately to mind for one of the finer instances of this.

It is strangely beautiful; looking into the lives of others and seeing the dysfunction, the junk, and in the right light, the beauty. It’s not what you’re looking at but how you’re looking at it that makes it art. If you look just right you’ll see art and beauty in Dirty Pictures now playing through October 21, 2018 with Rapid Lemon Productions at the Baltimore Theatre Project.

Dirty Pictures plays through October 21, 2018 with Rapid Lemon Productions at Baltimore Theatre Project— 45 W. Preston Street in the Mt. Vernon neighborhood of Baltimore, MD. Tickets are available by calling the box office at (410) 752-8558, at the door, or by purchasing them online.