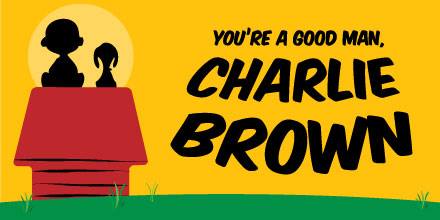 Happiness is finding a pencil, pizza with sausage, telling the time. Happiness is learning to whistle, tying your shoe for the very first time. Happiness is playing the drum in your own school band, and happiness is spending an evening with the cast and crew of Artistic Synergy of Baltimore’s You’re A Good Man Charlie Brown, Directed by Melissa Broy Fortson, with Musical Direction by Michelle Bruno.

ASoB has elevated their production from show status to a concept, which is simply the best thing to hit Rosedale since Farrell’s Ice Cream Parlour. The entire cast is made up of young people from eight to eight-teen. For those who prefer the tech side of things, apprentice roles are available. Having spent the last eight weeks under the tutelage of Fortson and Stage Manager Donna Zubrowski, Apprentice Director Ellie Fuhrman and Apprentice Stage Manager Cody Areford were every bit running the show. I was particularly impressed with Areford’s communication with his actors and how fluently he managed the scene changes. Ask any Stage Manager and they will tell you, when you have to rely on actors to participate in scene changes, you might as well be herding cats. Congratulations to both Fuhrman and Areford for jobs well done.

Since their founding in 2012 ASoB has strived to teach and to provide a safe place for new actors of all ages to explore the wonderful world of theatre. Over the past six years they have stayed true to the vision and it has never been clearer than with this show. Unlike many companies who cast the same people in every show, Charlie Brown features a cast of 80% first timers at ASoB. Staying true to their mission, they incorporate their actors and families in the production. The cast, crew, and parents built the sets, painted and decorated the sets as well as designed the costumes. The set design was perfect for the performance space and the costuming was bright, and true to the characters that we all grew up loving.

Music Director Michelle Bruno understands what it takes to work with young people and is a perfect fit for the nurturing environment of ASoB. While this show is traditionally cast with six people, Fortson and Bruno open the doors for a cast over three times that and make sure that every added member of the ensemble is featured at some point in the show. Bruno is well aware of the multiple levels of voice training within her cast and pushes her more experienced singers to put on a phenomenal, show-stopping performance.

Chloe Davis (Snoopy), Sara Mackin (Lucy Van Pelt), and Charlotte Thiessen (Sally Brown), shine brightly during their solos and provide a firm foundation for the group numbers. However, what I found most impressive was that Bruno let the rest of the cast be who they are. I wish more Music Directors that work with children in community theatre understood this. You’re not casting for a national tour; you’re giving an opportunity for someone to be a part of something much bigger than maybe even they could have imagined. And you know what? It works! To see the entire cast work as one unit, and the smiles on their faces during curtain call, knowing that they had conquered this performance together, reminded me of why I love theatre.

Fortson and Fuhrman encouraged their actors to develop their characters and you can tell that this cast put in the work. This is especially evident when Mackin and Gregory Areford (Linus Van Pelt) are on stage. Knott’s Berry Farm is to the Peanuts as Disneyland is to Mickey Mouse. It’s as if Mackin and Areford were teleported from California just for this production. Mackin captures the crabby side of Lucy so well that she strikes fear in the audience. She is determined and not afraid to tell you what she wants, nay, demands. Mackin commands attention and delivers a performance that will keep any little brother to a big sister in therapy for a very long time. Areford not only looks and dresses his part, but his delivery is perfect. He possesses a firm understanding of the often-lost intellect that is Linus. Even in his featured scenes, Areford shows that he is fully aware that Linus’ “last word” is only effective if he allows his straight men to set it up, and he affords them every opportunity to waltz right into his zinger. When it comes to his stage presence, like the character he plays, Areford is wise beyond his years.

Choreographer Rowena Winkler must not sleep at night. If what goes on inside her mind is anything like what is happening on the stage, you have the perfect example of perpetual motion. Winkler subscribes to the philosophy that “still is stagnant”, and the audience loves her for it. From the opening number to final curtain, if there is music playing, then people are moving. Her cast flowed like a wave to the shore and back during group numbers. It was almost as if they were all tied together with strings and she was the puppet master. To get a group of young people, with a ten-year difference in age to be that in synch with each other is impressive to say the least. Winkler utilizes the space given to the fullest. Sometimes the entire cast is dancing together, other times she breaks them down into groups, but always it is precise and entertaining. The rabbit chase scenes were some of my favorites. Just as Bruno leaned on her strong voices, Winkler’s cream rises to the top in the form of Chloe Davis.

Davis is a triple threat with a bright future. Besides helping to shoulder the vocal talent, and delivering a performance of Snoopy that even Schultz himself couldn’t dream of, her tap solo alone is worth the price of admission. Many a more seasoned dancer has trouble not clicking and clacking on a stage much less a tile floor, but Miss Davis floated as if still in her jazz shoes. She moved flawlessly around the stage and her featured dancers. She caught my attention during the opening number. I noticed that her leg kicks were much higher and delivered with ease. Checking her bio, she just completed her tenth year of dance instruction. I had the honor to speak with her after the show and she told me that she is looking into several high schools for the performing arts next year. Whichever school she chooses will certainly be getting a boost to their program.

If you were to look up the word “brat” in the dictionary, there would be a picture of Charlotte Thiessen as Sally. Thiessen easily will make you feel sorry for the character with which she is interacting. She is Charlie Brown’s sister and she feels that the world is out to get her. Unlike her brother though, she will not stand for it. From a mediocre art project, to the family pecking order, Thiessen tells it like it is and does it in a way that will have you laughing and somehow understanding her point of view. As with the other leads, she knows her character. Watch as she skips on stage with a smile, goes into a rage, and then skips away smiling again. She portrays a Sally that makes her point but doesn’t let it ruin her day. Her interaction with Snoopy and the rabbits is hysterical. Another strong dancer with a stand out voice, I would love to see her showcase her talent onstage with adults where she would have no problem holding her own; perhaps as Annie or Brigitta Von Trapp.

Not to be overlooked is Isaac Hawkins (Schroeder). Hawkins is a wonderful actor that seems to feed off of his fellow cast mates. He delivers a believable performance during the “Moonlight Sonata” of someone who just wants to be left alone. His facial expressions and body language convey that of a man forced into a discussion with a woman that he doesn’t want to have. Later, he is able to convey his annoyance with the group as they try and commercialize the birthday of his favorite composer. When his character is not being bothered, Hawkins shows the fun, friendly side of Schroeder. He is a definite asset to the cast.

Good grief! What can be harder than playing a classic character that has been around since 1950? I would imagine playing the role cross gender, and to do it as well as Brittany Runk does. Runk tackles the role head on and makes it her magnum opus. To the best of my knowledge, from it’s opening in 1967 to the revival of 2016 (over 2,172 performances), the role has always been played by a man. Community theatre, schools and the like aside, you would have thought that a female somewhere would have given it a shot. In fact, Erin Chase has been the only other person to receive professional credit for playing Charlie Brown, and she did it as a voice over actor. While watching the show, I did not see Brittany. I was enamored by the Charlie I grew up with. As a director that crosses gender, racial, body type lines as much as possible, I applaud Miss Runk not for her courage to play the part, but for playing it so well. She is the round-faced blockhead that we all love.  She can pull from you several different emotions throughout the show, but the one you will love most, is the happiness at the end.

Special shout out to Louisa Davis (Peggy Jean)! This was her first community theatre production. Thank you for lending your talents to this show. Best of luck to her as she sets off for Birmingham Southern College where she will major in musical theatre.

You’re a Good Man, Charlie Brown plays through August 12, 2018 at Artistic Synergy in the basement of the Prince of Peace Lutheran Church— 8212 Philadelphia Road in Rosedale, MD. Tickets can be purchased by calling the box office at (410) 833-5181 or by purchasing them online.

Much Ado About Nothing at Artistic Synergy of Baltimore
Close