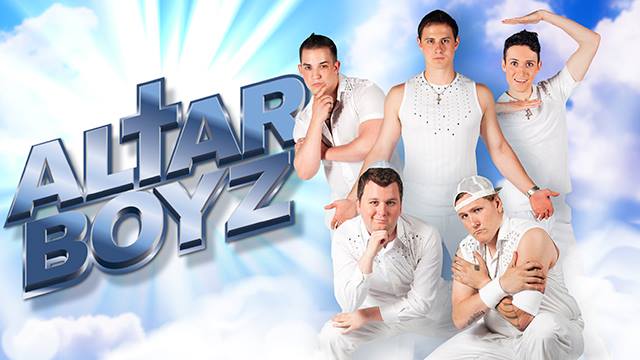 There’s a brand new sound goin’ ‘round the world and it’s going to ‘altar’ your mind! It’s the Altar Boyz live in living color at the Annapolis Summer Garden Theatre and they’re going ‘altar’ your mind for sure! Directed by Mark Briner with Musical Direction by Ken Kimble and Choreography by Becca Vourvoulas, this poppy, enthusiastic musical will spin your head right round, get your feet stomping on the ground, and really get you down on your knees— praising along with these altar boys!

Christian Pop Group + 90’s Boy Band = Altar Boyz. And that formulaic concert realness is what’s being served up by the ASGT design team. It should be noted with great pride that all of the props featured in this production— in particularly the Soul Sensor Dx12— are from the original off-Broadway and subsequent touring productions of the show. This adds a zesty punch to the overall production quality of the show as the Soul Sensor Dx12 alone is a show in and of itself. Lighting Designer John Purnell has a high bar of standards to live up to but does so with extraordinary flare, giving the audience that dazzling concert-esque quality of laser lights dancing all over the place. Purnell understands the inner mechanisms of how to light the space at AGST (which is exposed to the elements, has no roof, and at this time of year has mid-grade sunset lighting for the first 20 minutes of the production) and emboldens his lighting fixtures at the back of the stage so that they really glow, even during the early portions of the show. Set Designer Dan Snyder keeps things simple, giving the boys ample space to trick out their terrific choreography and giving the band a placement in direct view of the audience right in the middle of the stage.

Musical Director and Pit Conductor Ken Kimble works with vigor to keep the tempo of the show at breakneck. Despite the company’s decision to write for permission to include an intermission, Kimble’s ambition alongside Director Mark Briner’s keen understanding of the show keeps it fueling forward with a ferocious fire so that even with that unnecessary intermission break, the show never loses momentum. Kimble and Briner share the spirited, up-tempo vision of the show and their enthusiasm for this production is well-mirrored in the five performers. Briner ultimately conducts a tight show that is full of energy, comradery, and an honest balance between camp and sincerity. The show itself satirizes boy bands and Christian pop groups alike which lends itself down a slippery slope of high-end camp without any heart or soul, but Briner plays the show on a straightened edge, letting the natural comedy penned into the characters and the lyrics of the numbers hit home hard all on their own.

The real star of the show, from a technically creative standpoint, is the choreography of Becca Vourvoulas. With pop-thumping choreography that rivals any routine the Backstreet Boys, *NSYNC, or 98° ever produced, Vourvoulas replicates the feel of a proper 90’s boy-band concert. You feel that beat? Because you will with the moves that Vourvoulas has concocted for this show. With intense routines that are succinctly delivered, expertly executed, and crisply cranked out, one half expects screaming teenie-bopper girls to start throwing themselves up onto the stage. Vourvoulas understands the dramatic tempo shifts in the songs as well, and keeps the energy at high-octane levels even when the songs slow down into those smoldering love-type ballads for which the 90’s boy-bands were known. Ultimately a rich addition to the creative team, Vourvoulas and her choreography are the sixth unsung Altar Boy in this production.

Matthew, Mark, Luke, Juan, and Abraham. Absolutely exactly what you were thinking, right? These five boys couldn’t be more like brothers if they were actually related. Even at high points of tension in the show, they sing like a group who loves each other and their mission, they move like a group whose been choreographed together since they were toddlers, and they experience and express like a group who really understands what’s happening as well as understanding each other. The positive energy radiating out of them is extraordinary and really defies description. No one tries to upstage anyone else, they all find their red-hot moments in the spotlight and they all share the burden of this energetically exhausting show.

Abraham (Zach Husak) may be the odd boy out…or maybe not when you look a bit more closely at everyone else… because when you get down to it, aren’t they all a little out? But I digress, Huask holds his own good and proper when it comes to fitting in with the Altar Boyz, and holy Jesus if he don’t do his share when it comes to the dancing and fine footwork that everyone gets to see during this show. Playing the Jewish character, Husak takes all his shots. You get a great vocal punch of his capabilities during “Church Rulez.” Husak shows his vocal prowess with his solo segment during “Everybody Fits”, the song that features ridiculous “lamb of God” (read Lambchops of childhood) puppets to demonstrate that we’re all in it together. There’s even a chance for Husak to showcase his belt during segments of “La Vida Eternal.” Convivial and earnest, Husak fits right in with the other Altar Boyz.

Then there’s Luke (Ben Heemstra.) Guns for miles and a great hulking dose of buffoonery to go with them, Ben Heemstra is the perfect fit for this street-gangster archetype with a liberal splash of holy water to clean up his act. Heemstra blazes the house down and raises a little hell for his mic-drop-worthy rapped verse of “Miracle Song”, a number where all the boys get a chance to try the rap of off-Broadway pre Lin-Manuel Miranda. With sharp comic timing, a voice and energy that won’t quit, there isn’t much stopping Heemstra’s incarnation of Luke. Watch out for his explosive and highly eruptive spells of ‘exhaustion.’ Though Heemstra’s character is never exhausted, when he gets all riled up talking about those times where he was exhausted, it’s going to make you wish that you too were exhausted because he’s so intense!

With a purposely phony (per the script) and thick-laid Latin-X accent, Juan (Michael Parks) brings some serious shenanigans to the group. Parks, who maintains a heightened state of campiness, which adds balance to the sincerity that other group members are bringing to the show, is the perfect quintet slice of this Altar Boyz pie. He sings, he dances, he pops his hips and moves his lips and does a solid balancing act with everything that’s happening over the course of the evening. Upping his campy game for his re-enacted segment of “The Genesis of The Altar Boyz: According to Juan”, Parks really engages the audience in some absurd humors to keep them giggling. Combing his singing skills with his heightened theatricality, “La Vida Eternal” becomes a hilariously engaging number, even once the Juan character falls out of it.

Born leader Matthew (Jamie Jacobs) holds the group together like the holy glue. Raising more than a little hell as the front-n-center of the dance routines, Jacobs is on point with his moves, his voice, and his expressions. Delivering that funky fresh sound with a message, Jacobs is leading the group through number after number with gusto. Smoldering his way through “Something About You”, Jacobs takes that 90’s approach to that lyrically dissonant love song and all but melts the poor audience victim participant when he brings her up on stage. Knowing when to blend and when to really push it out there, Jacobs- like all the Altar Boyz– really has a sharp understanding of the nuances of this musical; its more than just camp, more than just satire, and has a whole lot of heart.

And then there’s little Mark (Angel Duque) who’s got a big freaking, flaming secret to belt out— and boy ever does he! Duque explodes with climactic enthusiasm at the pinnacle of “Epiphany” and really puts that voice and all of his unique fabulousity out there, loud and proud! With hip pops that make your joints ache just to look at him, Duque is a sensational blaze of brightness, a fiery fierce soul with lots of passion, so passionate it’s almost sinful, and dance moves to match. Adorable and amazing go hand in hand for Duque when it comes to getting down with the Mark character.

When the five bring their voices and bodies together as one, especially during “Number 918” you’re gonna feel the power, you’re going to be moved. As promised, these boys are going to ‘altar’ your mind. Seeing is believing, right? So you better see to it that you get tickets to see Altar Boyz so you can believe in the surefire talent that they’re spinning down on the docks of Annapolis.