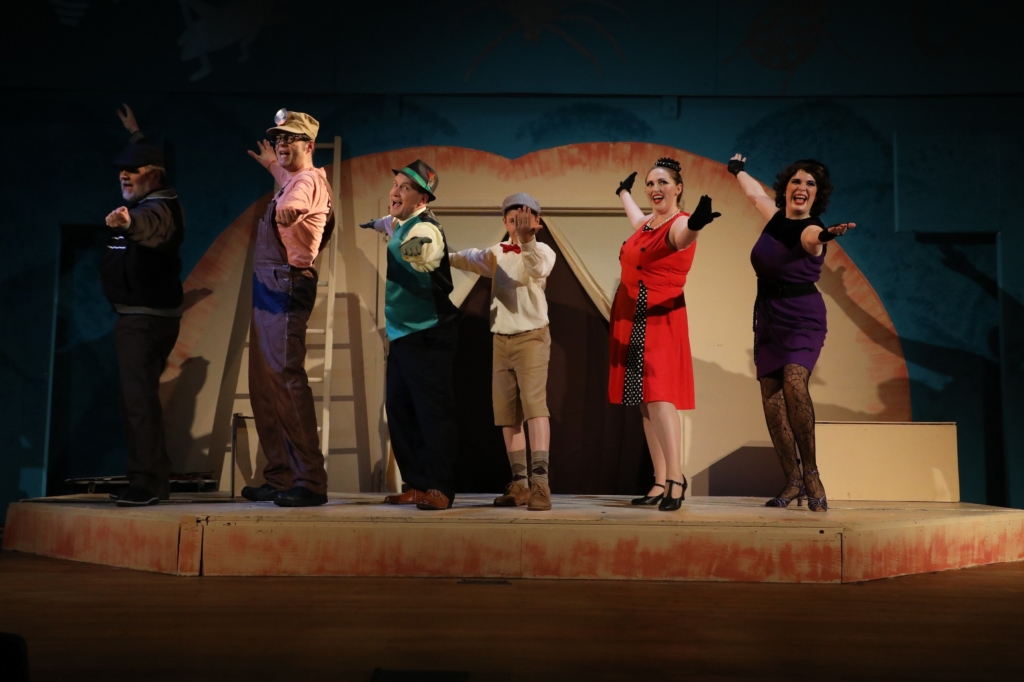 Close your eyes and try to conceive, the most outrageous story to ever be believed! If you can just believe, it’s beautifully bizarre, a story about a boy— and a giant peach, and that’s just the way things are! Right before your eyes— James and The Giant Peach is now appearing on stage at The Heritage Players as their summer engagement. Directed by Elizabeth Tane Kanner with Musical Direction by Emily Taylor & Chris Pinder and Choreography by Malarie Zeeks, this charming magical tale is perfect for audiences big and small, offering up a little entertainment for everyone.

The darkened Roald Dahl story finds dazzling new light as a full-length staged musical and in the hands of the Heritage Players production team, there’s many marvelous things occurring. Director Elizabeth Tane Kanner keeps things simple, after all the most marvelous thing that can happen in a theatre is when the audience engages their imagination with what’s happening on stage! Refusing to get stuck in the sticky web of razzle-dazzle and stage spectacle, Tanner guides the creative team into simple and easily navigable waters, allowing the actors to strut their creative stuff.

Kanner, who doubles up as the show’s Set Designer and Scenic Artist alongside Atticus Copper Boidy (and a tremendous assist from a team of over one dozen set painters) and additional scenic artists Mars Hoggard and Meredith Tane, create a visually simplistic affair for the backdrop. The artistry team makes a wonderful backdrop for the hill and house in which James’ nasty aunties reside. Lighting Designer TJ Lukacsina adds splashes of color and effect here and there, where naturally appropriate, to augment the artistic team’s work. Sound Designer Stuart Kazanow compliments various and sundry stage occurrences with crisp, clean sound effects, which are at times quite effective!

Visually the show is quite clean, albeit at times (though appropriately so) campy. Costume Designer Lisa Chicarella pays close attention to detail when it comes to transforming the garden variety insect into a larger than life personality. Spider has her additional legs tucked elegantly down the front of her dress like draped detailing rather than garish accessories clipped onto her sides (and she wears web-print stockings!) and Ladybug’s spots are delicately tucked into the under-folds of her dress lining so that the dominant color seen on this lovely character is red. Chicarella does more than create these extraordinary insect characters; she pays fine attention to the ensemble as well. When “There’s Money on That Tree” rolls around, various and sundry don the fashions of haughty Hollywood for the number, adding laughs and amusement to the performance. And the revolting shades of cotton candy and lime that are belabored upon Spiker & Sponge are just too much for words!

Malarie Zeeks’ choreography is simple but engaging, clean and well-danced over the course of the various ensemble numbers. Zeeks’ approach to the show’s dancing is similar to the one that Properties Mistress Katie Sheldon takes for the shows various props. Ingenious but simple little decisions, like using peach-colored paper lanterns for the peach as it grows and grows (and using Ladahlord as the conducting magician every time they change) until it morphs into a giant twirling peach-colored umbrella, at first seems cheesy but sits well inside the sweet and innocent imagination of the show as a whole. Both Zeeks and Sheldon have a knack for the basics, choosing perfection in the ordinary rather than shooting for extravagance which can often appear put-upon and sloppy.

The ensemble is populated with full-voiced singers and energetic dancers alike. They follow Zeeks’ simple choreographic steps to a successfully enthusiastic series of dances which help move the magic along with great consistency all throughout the show. Nary a negative comment can be made all across the show, save for a couple of wavering and slightly inconsistent accents, though Dialect Coach Ryan Geiger does his best to import the sounds of England (in varying degrees) to the principal speaking characters. Geiger is most successful with the accents of Spiker, James, and the slight French lilt heard on Spider. Ladahlord creates an un-accented, albeit highly affected, sound all his own, which further elevates his maniacal enigmatic nature.

Speaking of the narrative figure, Ladahlord is delivered with superb insanity by Stephen M. Deininger. Diabolically mysterious, perpetually animated, and jittering with a foreboding exuberance, Deininger brings a commanding presence to the role of not only a narrative figure but a crackpot comic character man. When encountering James directly, just before his big bust-out musical number, Deininger creates a vocal sound that is utterly REMARKULOUS! Defining the fine line between mystical and maniacal, Deininger approaches the character in a way that intrigues children while putting a spooky (but not frightening) edge to it. Truly shaking it up, both vocally and physically, Deininger puts a proper snazzy twist and turn into “Shake it Up”, causing the whole cast involved with that number to follow suit. His satisfying renditions of “Right Before Your Eyes” (and its unending reprises) are all marvelous wonders that border on the edges of creepy and unsettling in a truly enchanting fashion.

Creepy and unsettling are the words that James might use to describe his aunties— Spiker (Ashley Gerhardt) and Sponge (Amy E. Haynes)— if he were trying to be polite. Rotten, revolting, repugnant abominations might be more apt descriptors as far as these vicious, vile, villainesses are concerned. Gerhardt and Haynes are hilarious together, with Haynes playing the vacant, brainless wonder of the duo while Gerhardt is the nasty nipper of the pair. Both have rich, radiant, robust voices that carry gloriously through “Property of Spiker and Sponge” as well as “A Getaway for Spiker and Sponge.” Gerhardt has a potent punch of poisonous personality while Haynes all but steals the show with her whipped cream antics. The pair are perfect and play delicious villains in this show.

There’s a full garden variety when it comes to the personalities of the insects featured inside James and the Giant Peach. Everything from the cantankerous, curmudgeonly Centipede (John “Gary” Pullen) to the terribly trembling and terrified Earthworm (Matt Scheer), these bugs are the best. Pullen’s grumpy temperament is well suited for the character’s dialogue, especially when grousing at James. Scheer, who adapts a particularly reserved-sounding English accent, does wonders with his character’s fear. Bursting out at the end of “Plump and Juicy”, Scheer gets a chance to belt out his vocal prowess and show the audience his lion’s side.

Spider (Megan Mostow) showcases a swanky jazz sound during “Have You Even Begun to Wonder?” and does a tremendous job of keeping her French-influenced accent well into her singing voice. Many times the well-established accent of a character vanishes entirely once the actor starts singing, but this is not the case with Mostow, who gives just enough of a hint of that French sound that adds a layer of mystique to Spider when she sings. Tender and gentle, not unlike a kindly auntie (so far from James’ actual aunties), Mostow transforms this unique character into something extraordinary, letting her voice blend naturally during the group numbers.

Ladybug (Rebecca Hanauer) is a very mellow version of a prim and proper English lady. Despite her delicate social airs, there is a tenderness that Hanauer imbues to the character, making her almost matronly but not in a severe or aged fashion. Creating a dulcet, mellifluous sound, Hanauer soothes with her voice and lilts along through her verse of “Everywhere That You Are”, like the comforting hug one receives just at the end of a sweet, goodnight lullaby sang from mum. This is accompanied by Grasshopper (Jeremy Goldman) who joins the number with a voice that reassures, like a warm blanket of safety and security at bedtime. Hanauer and Goldman play well together, especially when they start mock-swing dancing during “Have You Ever Begun to Wonder?” Goldman vocally strolls along through “Floatin’ Along” and plays the character in earnest, creating a gentle almost fatherly figure out of Grasshopper. The gentle chemistry that Goldman creates with James is one that is sweet and paternal, feeling natural and helping to strengthen the overall familial bond between James and the insects.

As for James (Brandon Goldman), there aren’t enough praises in the whole of the cliffs of Dover to sing the joys of just how wonderful he is in this production. Young Mister Goldman is truly a peach when it comes to playing James, with a powerful grip on his English accent that never wavers! He puts every ounce of pluck that he owns into “Middle of a Moment” and wows the audience with a strong, clear voice. Really engaging with the character’s emotional traumas, young Mister Goldman finds great depth and sorrow in “On Your Way Home” but just as readily reflects joy and enthusiasm when engaging with the various bugs.

Are you ready to reach into the great unknown? If so, be sure to catch this marvelously FANTASMERIFFIC production of James and The Giant Peach at Heritage Players this summer before it disappears…right before your eyes!

James and The Giant Peach plays through July 14, 2018 at The Heritage Players in the Rice Auditorium of the Spring Grove Hospital Campus— 55 Wade Avenue in Catonsville, MD. Tickets can be purchased at the door or in advance online.

Seussical at The Heritage Players
Close