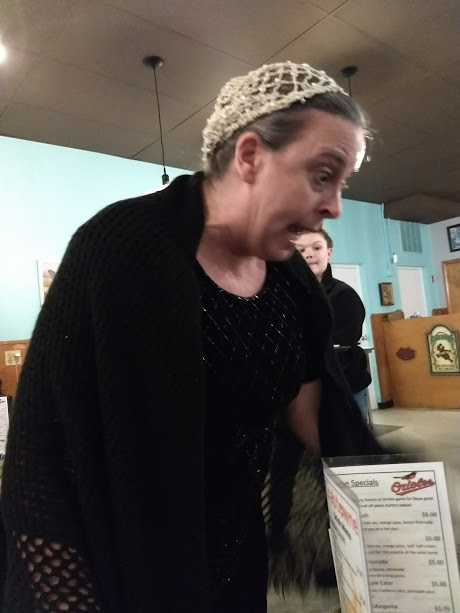 Start the car— I know a whoopee spot! Where the gin is cold and the piano’s hot! Well, not exactly. The gin might be cold…but they sure ain’t got no piano. But what they do got is the head of The Irish Mafia, Kieran Padgett Jr., and the head of The Italian Mafia, Fabrizio Santorini, settling down into Maggie’s House…for a peace negotiation. Only it ain’t Miss Maggie’s House no more because she done left it to Charity. Charity Brown, that is. And it’s up to Charity Brown to enforce the rules:

But when One of the Gang (a classic Do or Die Productions’ piece) rolls into the company’s newest performance venue— Crabtowne USA (located in the heart of Glen Burnie on Crain Highway)— you can bet your 1920’s booty that all of them rules will be breaking faster than the flipping insults flying at the Irish from the Italians and vice versa. Written and Directed by Ceej Crowe, the company’s artistic founder and current leader, this tried and true classic is the perfect show for the new venue debut.

Featuring classic company actors in these time-seasoned roles, the murder mystery is well underway at Crabtowne USA. Will you be able to solve whodunit before the evening’s out? Or will you be caught up in the crossfire of this raging war between the Spaghetti Sheiks and the Potato Princes?

Kieran Padgett Jr. Head of the Irish Mafia now that his father has been…taken out, as they say, this green-blooded assassin is out for blood indeed. Played by Charles Boyington, whose Irish accent is about as clear as potato soup, the Irish Mobster gets into the thick of it pretty quickly. Despite the stiffened physicality when interacting with the strumpet character, with whom his character is having a blatant affair, being slightly awkward (and this could potentially be a character choice to show that he’s trying to be more subtle and underhanded with the affair, though the dialogue given to the character does not indicate this to be true), Boyington has a brass nature about his portrayal of Kieran, which makes him suitable for a Mafia Boss style man.

Fabrizio Santorini Serving up Marlin Brando Godfather realness, Steven Kirkpatrick is so slick and on point as the head of the Italian Mafia, that he’s going to make you an offer you can’t refuse! The subtle accent, the gestures, the body language, even the facial expressions are something straight out of a classic mobster movie. The way Kirkpatrick interacts with the other characters as well as with the audience is sublime; this role is one of Kirkpatrick’s finest, and if he doesn’t have you convinced that he’s out for exactly whatever it is he says he’s out for? Well…he might be sending a car out to take you for a ride before it’s all said and done with.

Eve Adams A sassy but none-too-classy broad, former-and-potentially-still lady of the evening, Eve Adams is an iconic strumpet of the 20’s decked out in her shimmering outfit and snarky attitude. The former lover of Fabrizio Santorini and currently lover of Kieran Padgett Jr., is played by Erin Tarpley and to great effect. With a vocal affectation that suits both the character and the time frame, Tarpley is spot on when it comes to her quick quips and biting banter. Fully feeling the femme fatale of her character, Tarpley puts the room on edge whenever she’s playing in a scene and this serves to stiffen the excitement in the room tenfold.

Antonio Santorini The younger, and somewhat less impressive Italian Mafioso, the tagalong of Italian Mobsters as it were. Played by John Kelso, this character falls into the background somewhat throughout the show, but serves a purpose just the same. Kelso vacillates between a non-existent vocal accent to an outrageously stereotypical Italian sound, which intends to have comedic zest and punch, but unfortunately comes off as inconsistent and strange, despite saying that he falls into thick Italian when speaking with his brother. (If Kirkpatrick’s accent was more cartoonish the way Kelso’s is, the shtick of this gag would work but as Kirkpatrick takes the flawlessly appropriate Godfather approach to his character’s sound, it falls short on delivery.)

Charity Brown is too old to be working but too young to be out of the game. Played aptly by Cybele Pomeroy, the character— despite her aloof and generally dazed presence— serves the role of peacekeeper between the mighty fighting Irish and Italians. At times Pomeroy’s comedic delivery feels out of sync with what’s happening in the scene, though this could just be the overall pacing at the point in the show where it falls. But what she lacks in precision timing, she more than makes up for when grilled on the hot-seat. Pomeroy’s physicality, especially when it comes to her fidgety hands and feet, is to die for and adds a great deal of appropriate humor at one of the most intense portions of the show.

Caitlin Padgett is as Irish-Catholic-Maternal as they come. Played by writer and director Ceej Crowe, this role is a true interloping disaster, penned to maximum comic effect to totally and completely derail the peace-meeting as a dirty and underhanded stab from the Italian side of the ‘non-war’. Crowe’s well-practiced drunken stumbling and verbal delivery makes her character’s rapid inebriation hilarious yet intelligible. All too often actors attempting to play sloshed lose sight of their words and even presence on stage in favor of playing up the drunkenness, but not Crowe. Deftly maneuvering the space, whilst keeping her drunken physicality fully in play, Crowe creates a hilarious character in Caitlin Padgett, complete with a strong, consistent Irish accent, which never wavers, even when her character is a wee bit too drunk to be making sense.

Colin Padgett is a right smack in the mouth, he is. Played by the versatile Talis Tighe, this character is a hot loaded pistol. Tighe contends with Kirkpatrick for best accent of the evening— it’s really a tie between the pair because both are so unique and both add such a liveliness to their characters. There’s a frantic urgency in Tighe’s actions as well; they keep the energy rolling from arrival through to the conclusion. It’s never a dull moment with Tighe’s Collin in the thick of things.

On the second and third Monday night of every month you can catch their epic murder mysteries at The Sunset Restaurant & Lounge— 625 Greenway Road SE in Glen Burnie MD.

On the last Sunday night of every month you can catch their epic murder mysteries at Crabtowne USA— 1500 Crain Highway S in Glen Burnie MD.

For specific dates and productions, please visit their website.

Blue Christmas at Do or Die Productions

Review: Murder Rocks at Do or Die Productions

Review: Dead Ringer at Do or Die Mysteries
Close