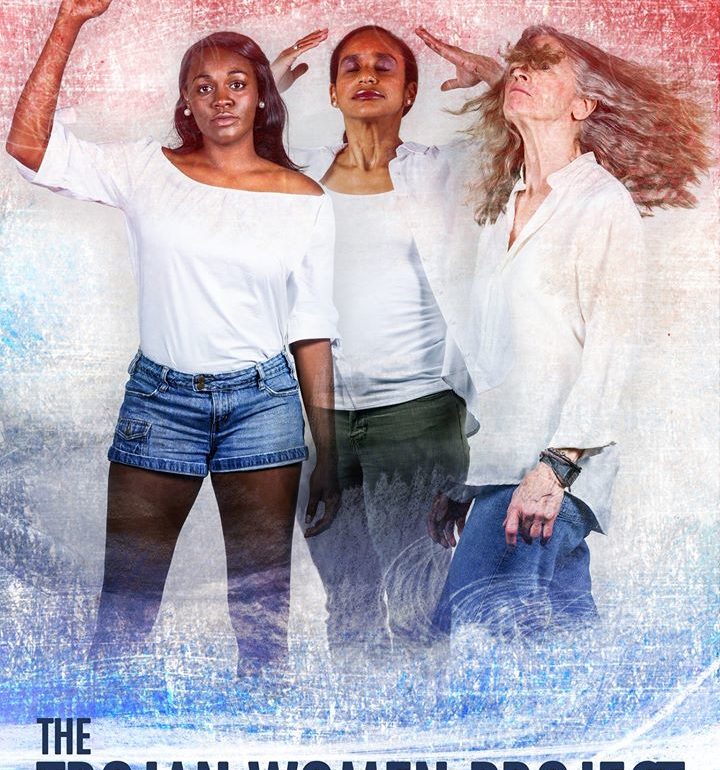 The natural orders are ours to make. Gender is a sphere. Women are women regardless of what kind of women they are. Does it make you a bad feminist or a bad woman if your version of feminism and supporting women is not the same as someone from a different generation, from a different race, from a different background, from a different socio-economic standpoint? The Trojan Women Project, devised by Rachel Hynes and the ensemble, brings women’s voices to the forefront of the stage. 13 bodies representing 13 diversified people, female and non-binary, from all walks of life, exploring how women cope in the here and now.

Despite its somewhat misleading title, the production itself sends a strong, clear message to theatergoers everywhere about the individuality of women and the importance of the woman’s voice. With minimal ties to Euripides’ text and only loose structural— bordering on skeletal parallels— the performance would be better served with a different title. But after witnessing all of the creative avenues and alleys explored within the show, it’s understandable that Rachel Hynes’ creativity was all but drained, allowing her to settle on the aforementioned title. That said, the result of Hynes’ vision and labors is ultimately a rewarding one, creating an evocative, spirited, and poignant conversation as stage-traffic for the modern audience to absorb, experience, and ultimately create a dialogue with in order to promote change and acceptance. This piece in particular is a model beacon for the current Women’s Voices Theater Festival, of which it is a part, running concurrently with 23 other pieces.

Scenery is minimal, bordering on non-existent, with a few chair scattered throughout the space— most of which get used by the audience— and an open, integrated floorplan otherwise. A lone muslin scrim hangs from the top of the ceiling and is used in a variety of ways throughout the progression of the production, none quite so chilling as when it becomes an all-consuming flame, both a literally representation of a character’s actions and a symbolic one of the flame that is consuming all of the women on stage.

Costuming is equally simple; Kristina Martin sets each performer in a flowing toga-esque affair, all in varying colors, which gives them individuality and also unity. It echoes back to the The Trojan Women era without literally placing the project there aesthetically, which is good as much of the performance is happening in modern day DC. Lighting Designer Peter Caress creates marvels, in the same vein of Brian Gillick’s simple set and Kristina Martin’s simple sartorial selections, using just four light-trees placed strategically around the space. Less is more in this case and it’s a principal served well by Caress, whose lighting effects add just the right amount of punch and awe at the exact moment throughout the process.

Karen Lange, who is not only a part of the women on stage, dons the cap as musical director for the show; this is a critical role because of the way sound and song play into the expressions of emotions in the piece. Lange uses song to unite and divide the women, primeval screaming and guttural wailing come into play as well, but it’s the penultimate moment in song that truly sends waves of rapture and bliss reeling through the audience as Lange brings the voices of 13 individuals representing women in all walks of life together in one pristine sound and moment.

Rachel Hynes addresses a multitude of attitudes, occurrences, actions, incidences, and behaviors in this devised work, all of which are topical, relevant, and extremely poignant. The show packs plenty of powerful punches, many of which are emotionally blind-siding. The program includes Trigger Warnings, so to better inform audience members who possess sensitivities to the subject matters of sexual assault, emotional abuse, and police brutality. Once these discussions on stage get underway— often in a roundabout and exploratory or constructively symbolic manner— there’s no holding back. Brutal honesty, raw emotion, real lives and real women all at their most human is what Hynes and the ensemble bring to the table.

There are moments that jar— there are moments that stun— there are moments that touch the heart— all encompassed in one performance, a rarity in and of itself. Hynes utilizes the ensemble and puts all of their individual strengths into play as well as their collective nature to perform as one unit of women. The project addresses political issues, sexual issues, socio-economic and neighborhood issues, as well as stereotypes, expectations, and so much more; the show is an experience that has to be fully absorbed to be processed and appreciated. Despite its slight misnomer of a title, the event itself is radical and poignant, relevant and realistic. Without wanting to spoil too much of the collaborative, ensemble experience, it can be said that it is an experience like no other that will move you— in one way, shape, form, or another— before its conclusion.

The character of Jenny, (Suzy Alden) despite being an obnoxious millennial appearing to have very little depth to her personality, is given one of the more haunting solo experiences— dealing with emotional abuse— which showcases Alden’s versatility as a performer. Ruthie Rado, as Willow, shares with the audience the physical experience of undergoing a panic attack; this is a remarkable moment that hits hard for a great member of those watching, including the other performers who are watching her. While the basis of a “story” revolves around a neighborhood in Washington, DC threatened by gentrification and “change for the better”, and the characters therein establish these extraordinary relationships— both functional and not— there are moments that exist in this collaboration outside of that, which bring tears to the eye, laughter to the heart, and unfathomable emotion to the soul.

Renea S. Brown, the polished Reagan, Miss DC 2012, is removed from the trials and tribulations of ‘change’ or so Nefertiti (Nicole Ruthmarie) thinks. Both actresses give powerful speeches, deliver tremendous strength to their characters, and showcase a world of empowerment to women and women of color. Betty (Lisa Hill-Corley), the pillar of strength that holds the neighborhood together, is an excellent example of providing strength and giving voice to not only women, women of color, women of lower-middle class socio-economic standing, but also women of an aged variety. Hill-Corley is convivial and earnest in her approach to the character; the speech that she delivers, both near the end of the show and during the “I did everything right” segment, is arguably one of the most evocative in the performance.

Other evocative players include Nany Linden as Lolly, a set-in-her-ways older generational woman, who delivers one of the most effective speeches— nearly the calamitous eruption of the women when the truth of ‘voting politics’ comes out— which is ultimately how every woman has felt at some point or another, ‘I just don’t understand this world.’ Sarah (Karen Lange) is an equally striking character, whose child has autism, and when she sits beside a random audience member— using them as the ‘father’ in her situation— and is faced with all of the trials that are presented to a mother dealing with an autistic child in school, the moment where the burden falls squarely on her is harrowing.

Jessica (Francesca Marie Chilcote), Maria (Claudia Rosales Waters), and Maya (Diana Gonzalez Ramirez) take turns serving the immigrant quota of the women represented, each in turn doing an exceptional job with the texts and characters they are given, addressing everything from legal immigrant status to unpaid maternity leave and then some. One of the most confrontationally tense moments in the production, however is shared between Devin (Ezra Tozian) and Kimberly (Claire Schoonover), a gender-fluid individual and a conservative Christian woman beyond the peak of middle age. When Tozian spills out their character’s speech, pointing out that society doesn’t know what to do with them or where to place them— and Schoonover repeats that same speech line for line, point for point right back at them because the exact same feeling of displacement and disgust is equally applied to older women, it’s stunning.

Even Alexis (Allison Turkel), representing the lesbian minority among the women, has powerful standings— especially when Turkel’s character gets riled up and starts the “march for me, march of one” segment that boils over into a discordant din of screaming, shouting, marching, and just trying to be heard as individuals when all they really succeed in doing is deafening one another so that no one’s voice is heard. All the performers in the production come together in a striking vocal finale, as well as group moments throughout the performance that sit with you, long after they’ve taken their bows.

Gripping, unforgettable, revolutionary, and moving— all of the adjectives being bandied about for the Women’s Voices Theater Festival— this production of The Trojan Women Project is setting flight to the voices of all women— regardless of their orientation, their sexuality, their age, their race, their soci-economic standing— this piece stands for all women of all beliefs and should be seen by everyone: men, women, non-binary identifying individuals, everyone.

The Trojan Women Project plays in repertory with Coriolanus through February 25, 2018 with Brave Spirits Theatre at The Lab at Convergence— 1819 N. Quaker Lane in Alexandria, VA. Tickets are available for purchase at the door or in advance online.