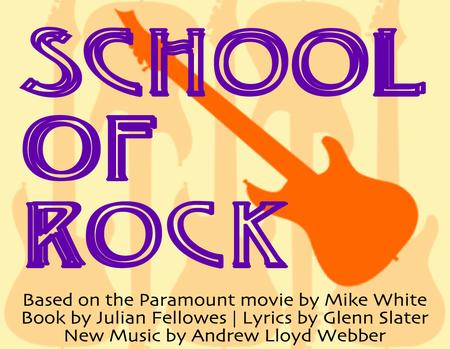 Are you ready to rock the house and make a scene? Because The Students’ Theatre at The Highwood Theatre is— and they’re doing exactly that with the Maryland premiere of School of Rock. Directed by Dylan Kaufman and Kevin Kearney, this roof-roaring production takes the Paramount movie and transposes it to the stage with all you need to stick it to the man, understand rock and roll, and totally expose children of all ages to the powers of rock music.

The scene— set by designers Fiona Lipczenko, Nyahna Johnson, and Kevin Kearney— is simple but made to rock. With little rotating panels to take the students in and out of school when necessary, the notion that scene changes will glide quickly is well-planted into the minds of the audience. Stage Manager Jonah White and his run crew— Owen Gibson and Jaquan Cooper— deserve thunderous applause for being ninja-squirrels and racing through these cumbersome scenery changes, which often involves flinging a dozen or so chair-desk units (complete with glow-in-the-dark tennis balls on their feet) out into the darkness of the stage, or from the darkened stage into the off-stage area, at lightning speed. Kearney, who directs the off-stage pit, vamps heavily through these extended scene changes to help keep the audience distracted. Though the scene changes are at times long, it’s not for a lack of effort, enthusiasm, and energy on White, Gibson, and Cooper’s part!

Lighting Designer Simon Ellerbe, again assisted by Kearny, really gets the rocker atmosphere in place, especially for the bigger group rock numbers like “Stick it to The Man” and “School of Rock.” With the constant use of blinking colors, Ellerbe captures that verve of rock-n-roll that Dewey so desperately wants the students to get when he’s attempting to teach them all about it. Costume Designers Tip Letsche and Paulina Campbell keep things simple when it comes to the school uniforms— all scholarly shades of hunter green and intellectual beige— and add just enough of that grungy grody appeal to the clothes worn by Dewey to keep him at arm’s length from everybody else.

While there are some missed choreography opportunities and a few places where the pacing could use a quick bump-up, the show itself is entertaining and showcases some strong young performers when it comes to talent, pizazz, and passion. With too many students involved in the production to name each one, it can be said that they all come together quite soundly to deliver an impressive performance of School of Rock. Standouts among the ensemble include the flagrant Billy (North Lovelady), the adorable— albeit nerdy—Mason (Danny Labaree) and the snotty know-it-all Summer (Sonia Skolnik), who perfectly embodies being swotty and teacher’s pet all in one go.

The five main students, who ultimately become the live on-stage band, are performed by Zoe Gomez, playing Tomika, Isaiah Longstreth, playing Zack, Nestor Fabritz Lugo, playing Freddie, Belinda Moore, playing Katie, and Leila Sibayan, playing Lawrence. Sibayan’s character rocks on the keys while Moore’s character picks up the bass. Longstreth’s character takes up lead guitar, while Gomez’ character— who starts off as timid and shy— bursts out as the lead vocalist. But it’s Lugo’s character, that of Freddie on percussion, that totally wows the audience by the way he slays on the drums. Fully invested in that hard-hitting profession of mastering the drum kit, Lugo really puts a rhythm and beat behind every moment he bangs away on stage. This assortment of students puts powerful emotions into their blended solo moments of “If Only You Would Listen”, really making their voices heard for this and other songs.

While there are a great many parents and teachers floating about in the production (all played by student performers, of course) the four main performers that shape the show along the lines of the plot include Anna Uehlein as the pinched and pain-in-the-butt Patty, Matan Mergi as the ultra-nerdy and terribly milquetoast Ned Schneebly, Jessica McCarthy as the severely austere and reserved rule of authority Principal Rosalie Mullins, and the king of Mt. Rock himself Will Valdes as Dewey Finn. This quartet of young performers is firm of voice, strong of personality, and perfect in their roles. The relationship dynamic between the two sets of couples— Uehlein barking and ordering about Mergi’s character and the slow-blossoming entanglement that occurs between McCarthy and Valdes’ character— are earnest and organic. McCarthy even gets to show off her extreme high-end soprano, bordering on coloratura, as well as a softer and more sentimental side as the production moves forward. Valdes, as the wild and unruly rocky Dewey, really finds his own among the students, keeping the edge about him all the while teaching and learning valuable life lessons that ultimately transform his character.

It’s time to rock and The Students’ Theatre at The Highwood Theatre has the answer with their production of School of Rock. Don’t wait to get tickets to this limited run engagement!

School of Rock plays through December 17, 2017 with The Students’ Theatre at The Highwood Theatre— 914 Silver Spring Avenue located in the heart of Downtown Silver Spring, MD. For tickets call the box office at (301) 587-0697 or purchase them online.

Vanya and Sonia and Masha and Spike at The Highwood Theatre