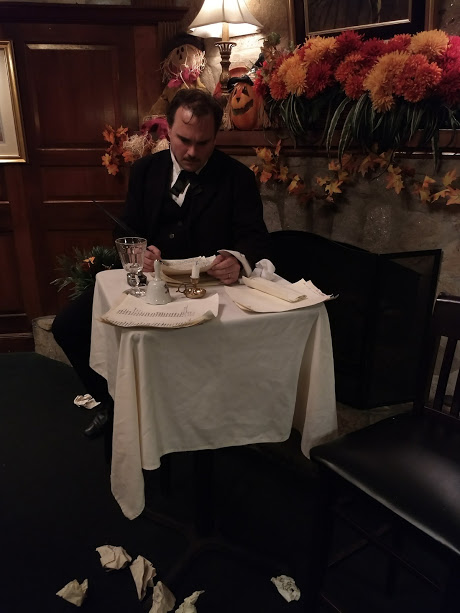 Tis the season to be inclined toward mischief and mayhem. Even if Halloween itself be over, and November freshly fallen upon us, who among us is really ready for that other holiday— the one with the elves and the singing and the snow? Settle back into the autumnal enchantments of a Baltimore classic, Poe’s Last Stanza, a yearly running and returning tradition produced by Do or Die Productions and hosted at their resident venue, The Sunset Restaurant and Lounge. Written and Directed by Ceej Crowe and featuring a new combination of resident company members John Kelso and Lauren Engler, this year’s production features new twists that Crowe has amended to the script, delving further into the madness of Poe’s mind in his final moments.

Set off to the side in one of the cozier private dining rooms that The Sunset has to offer, Poe’s Last Stanza brings Edgar Allen Poe to the masses the way no other show can; the show integrates the final evening of Poe’s rantings and ramblings right into the audiences’ laps, as the dreary and dismal poet meanders, somewhat drunkenly, through those present, bumbling and braying about his misplaced liquor and challenging various among him to a duel. It’s an intimate and interactive opportunity to be engaged with the emo legend as no other production provides; there’s even a chance he may engage his rapier wit against yours if the Bar Maid (in this rendition, played by the spirited Lauren Engler) cannot coax him back to his own table.

Now, I wish I could write as mysterious as a cat. Or as gruesome and poetic as Poe himself, or at the very least as sharply and as wittily as Ceej Crowe. With a honed eye on how to interlace Poe’s poetry into his everyday speech, Crowe takes to the words of the master of the macabre as if she were born writing them herself. Understanding how to balance his language against the modern ear and make it accessible to all present, regardless of their exposure to Poe, is one of Crowe’s great successes and hallmarks of the piece, which ultimately puts it heads and shoulders above other productions relating to the man. Finding the delicate balance not only of the language but of Poe’s humor— separating the madness from the drunkenness and the marvelously macabre from the morosely morbid— Crowe creates a perfect sampling of his final moments inside this weary tavern.

This year’s tweaks and additions include an unpublished work and a step further down the path into Poe’s madness, complete with a cacophonous and somewhat disturbing and haunting ringing of the bells. For those whom this production has become a tradition, worry not, even with this new addition, there are still exceptionally familiar moments to focus upon— like the somber reading of Annabelle Lee or the even more spooky and thrilling reading of The Raven in its entirety.

John Kelso reprises his role as Poe, having played it in last year’s production facing opposite Erin Tarpley, while Lauren Engler takes up the serving towel and apron of the Bar Maid, having played the role two years previous with Jose De la Mar in the role of Poe. This newfound combination of Kelso and Engler has a unique chemistry to it, with Kelso’s staunch southern drawl blazing a path through the evening, and pulling the attention to the way he flirts and fusses over Engler’s subtler and somewhat modern approach to the character. Kelso, who deftly maneuvers through the intimate space, takes Poe to the next level in the way that he handles, reacts, and responds to Engler’s portrayal of the Bar Maid and their engagement overall throughout the evening is an innovative new approach to Crowe’s script.

Dinner starts at 6:30 with the show beginning shortly thereafter

Poe’s Last Stanza plays again on November 6, 2017 with Do or Die Productions in residence at The Sunset Restaurant and Lounge— 625 Greenway Road SE in Glen Burnie. Reservations must be made in advance and can be made by calling (443) 442-3810 or by purchasing them online.

Review: Murder Rocks at Do or Die Productions
Close