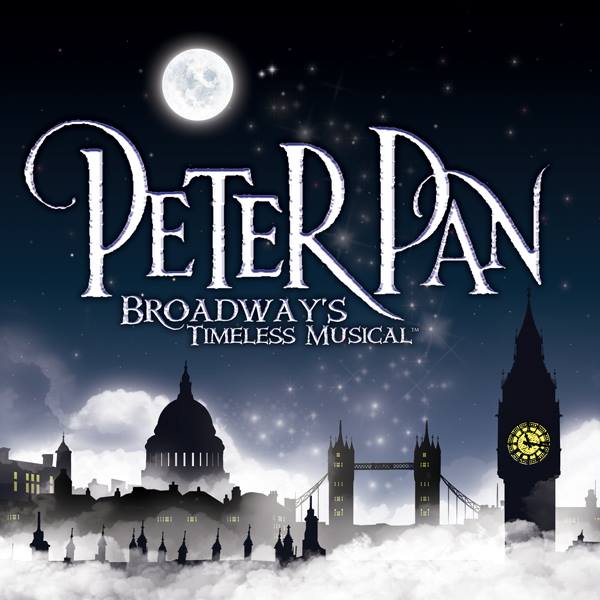 Think lovely thoughts! Mermaids! Pirates! Candy! No, no, no, lovelier thoughts! Think lovely thoughts! Make-believe! Dancing! Candy! No, no, no, no, no! You must think LOVELY thoughts! The JCS Summer Community Theatre production of Peter Pan? YES! You can fly! You can fly! You can fly! (See, how lovely a thought that was?) Quick— now that you’re all sprinkled up with your pixie dust and your lovely thoughts of fantastically imaginative and wonderfully performed community theatre, fly your way over to The John Carroll School auditorium and catch this sparkling summer gem before you grow-up and can’t remember how to fly! Directed and Choreographed by Kimberly Brueggemann, with Musical Direction by Julie Parrish, this timeless Broadway classic is soaring into the Bel Air area for just two weekends and you won’t want to miss all the delightfully enchanting things happening on this stage with Peter Pan.

Simplicity is the motif that reigns supreme over the show’s aesthetic; there is just enough created by the production team to stimulate and engage the imagination of the audience, and after all, what could be better than a game of make-believe? Set Designer Shawn DeVoe sets up all the hallmarks of the Darling’s nursey, complete with bunk beds for Michael and John, as well as the broad sweeping windows that overlook the starry night sky of Londontown. Proper windows are the most important element of all, for how else could Peter Pan fly into the nursey and reclaim his shadow? And isn’t that where this great adventure begins? DeVoe puts some very clever ideas together for both Neverland and The Jolly Roger, making simple set structures into elaborate pirate ships and secret hideaway camps for Lost Boys. Aesthetically pleasing but nothing ostentatious or overly decadent, the set that DeVoe has crafted is perfect for imagining a wondrous new adventure with Peter Pan.

Costume Designer Stella DiPeso follows suit; she takes her cues from DeVoe’s simplistic yet imaginative creations in the set. The Darling children are draped in the iconic threads that every reader of Peter Pan recognizes, with proper striped pajamas on John, a onesie on Michael, and a delicate and demure nightgown for Wendy. The title character and the antagonizing villain are both well represented in shades of green and red respectively. It’s the menagerie of patterns, prints, and colors featured on the pirates, the calamity of filthy rags featured on the Lost Boys, and the rich earthen tones of autumnal harvest— complimented by deep jewel tones— on the Natives that electrify the imagination in DiPeso’s sartorial selection. The headdresses for the Natives are the sparkliest accessory in the show, except for the bronze sequined trim on Princess Tiger Lily’s outfit.

What’s truly magnificent about this production of Peter Pan is not all of the beautiful basics that are laid out across the aesthetic, or even the stellar performances from the cast, but rather Director Kimberly Brueggemann’s approach to the show itself. Peter Pan has the potential to run long, with heavy scenes that drag on without musical interlude and a great deal of dated scenes that clunk along and weigh down the overall momentum of the show. Brueggemann is as clever as the boy who won’t grow up with her carefully reconstructed approach and overall vision for the script, giving everything a potent relevance. Making the smart choice to reinterpret the peculiar “Jungle Animal Ballet”, which occurs upon arriving in Neverland, with a much more appropriate dance of the Natives (featuring Princes Tiger Lily, the Indian Chief, and Tiger Lily’s Friend),is just one example of Brueggemann’s cleverness when it comes to this production. Shifting the intermission to arrive before “Ugh-A-Wug” and leaving the show on a drastic cliffhanger, as well as including Wendy’s narrative voice capturing snippets of Barrie’s original text are all shining examples of the pixie dust of perfection that Brueggemann sprinkles on this production.

Working in tandem with Musical Director Julie Parrish, Brueggemann moves the show along at a breakneck pace, which is bold but incredibly useful for Peter Pan as the show has the natural propensity to drag along. Parrish, who does an exceptional job of keeping the open-air pit balanced against the performers, knocks brains about with Brueggemann and creates brilliant ideas for scenic changes, which often involve clever blocking in front of the main curtain with actors moving along to Parrish’s underscoring. This not only keeps the audience from noticing the complex scene change, but provides little moments of otherwise unseen entertainment to the audience. Parrish’s finest accomplishment in the production is perhaps the cleverness she deploys when it comes to heightening the chaos upon the stage. The epic pirate battle between Peter Pan and Captain Hook— with Pirates and Lost Boys ‘swash-swash-buckle-buckling’ all around the stage— is underscored with some very impressive vamping that augments the intensity of the scene with a punch of piratical panache.

Ugh-a-wug! Where does one even start when it comes to the sheer brilliance and astonishment that goes along with that dance number alone? Wearing a secondary hat as the show’s Choreographer, Brueggemann turns out a show all its own with this highly complex dance number. Sending up a flare of fierce unity, the gestures are crisp in this routine, the movements are firm, and the stick-strikes are fabulous. It’s a jaw-dropping level of a amazement that accompanies the choreography of “Ugh-A-Wug”, and not just that number either. Though none of the other dance features are as intricately complex (or as wildly impressive), they are clean and succinct, movement with imagination that engages the eye, pleases the mind, and fits the beat of the music. This is especially true of the “Entrance to Neverland” ballet that Brueggemann has created to replace the jungle animal dance. Tiger Lily (Rachel Miller) and The Chief (Zachary Miller) move with a fluid grace that is noble and grounded in the majesty of this ancient native society.

With all sorts of talent just bursting out of the ensemble— you’ll hear them crow, and sing, and shout from miles away! There are Lost Boys by the score— with Mikey Shock leading the brigade as Slightly— and Pirates by the dozen— with Zachary Miller serving as Starkey, their not-so-fearless second in command. And naturally Indians too— led by the vocally felicitous Rachel Miller as Princess Tiger Lily. Keep your eyes peeled for the unsavory Crocodile (Trish Ho) who slinks along attempting to spook Captain Hook every chance she gets and of course dear Nana (Jack Taylor) who is quite humorous trouncing about in the fluffy gray pooch suit. With cameos galore— like Valory Myers who plays the salty (and well-accented) Liza, later appearing as Grown-Up Wendy with her daughter Jane (Ellie Myers) and Sydney Phipps as they elegantly dressed and well-sung Mrs. Darling— there are so many lovely things happening in this production’s cast you’ll be flying out of your seat before they even reach Neverland.

Michael Darling (Evan Christy) is just too precious for words. With a pouty little attitude, especially when it comes to taking his medicine, Christy exudes the youthful temperament of the youngest of the Darling children. Dylan Morrison, as his older brother John, has a much more reserved nature to his portrayal— as is expected of the top-hat-wearing young gentleman of the family. Together Christy and Morrison showcase the balance between true childhood and growing up ever so slightly. Their voices are cherubic and well suited for “Tender Shepherd” and “Wendy.” They even show off a bit of spirit for “I Won’t Grow Up” truly getting into the Neverland swing of things in this Peter-driven number.

Gentle and sensible and all things maternal, Kelsey Feeney makes for a remarkable Wendy. Balanced in her flirtations with Peter Pan, making coy little hints about her feelings toward him, Feeney embodies the proper attitude of a character caught on the cusp of no longer a child yet not quite a woman. Her voice is sweet, almost syrupy for her verse of “Neverland” and the parts of “Tender Shepherd” where you can hear her soloing out. The dynamic of interaction that Feeney creates between herself and Tinkerbell (a sound and lights effect fabricated by Julie Parrish and Technical Director Ed Lake) is quite humorous as well, making further subtle reference to her feelings for Peter. There are a great many moments when Wendy’s sensibilities shine through as her dominant character trait, and Feeney makes this a grounding point for all the interactions that her character has with the others in the show.

Tick tock. Tick tock. The croc is after Captain! Captain James Hook (Gary Dieter) that is— and a little less noise to boot, if you please! Dieter, who doubles up as the stern Mr. Darling, is sending up a magnificent flare all his own with this robust portrayal of the flamboyant pirate. Not too scary— except for that ruthlessly maniacal scene where he tiptoes into Peter’s hideaway to poison him— Dieter’s Hook is perfect for children and children at heart. With a booming voice that is completely contrary to his mincing walk and fabulously piratical strut, there is something to be said for this wayward whack-a-doodle when it comes to putting on the theatrics! Vocally sound beyond compare, Dieter lays into the sustains, holds, and belts of the good Captain’s various solo moments, really giving them that extra punch of piratical pizzazz. Watch his feet, they all but fly away during the Tango, Tarantella, and the Waltz! Accompanied by his parrot (almost quite literally) Smee (Mike Schafer), the pair get up to some good physical shtick throughout the performance, with Schafer repeating back lots, being none-too-bright about it, and making Dieter’s Hook look like the codfish we all know him to be!

Youth! Joy! Freedom! Lindsay Rosser is the sun, the moon, and the stars as Peter Pan! With that peculiar standoffish nature that only a curious boy who won’t grow up can have, Rosser embodies the leader of the Lost Boys with punch and pluck! Adapting a physicality that is well suited for the sprite-boy, Rosser takes to the aerial elements of the show’s rigging with great ease and looks as if she’s been flying Peter Pan style all her life. With a curiously passionate singing voice, “I Gotta Crow”, “Wendy”, and “I Won’t Grow Up” are as memorable as the first time you heard them once Rosser takes to singing them. Filled with the youthful spirit of adventure and the determined mindset of the boy who defeats Captain Hook, Rosser is a delight in this titular role. Her jack-split at the end of “I Gotta Crow” is the epitome of a Peter Pan move.

So come along now, you know the way— second star to the right and straight on to JCS Summer Community Theatre! You’ll have a real treasure, if you see their production of Peter Pan, a treasure more precious than gold!

Peter Pan plays through July 23, 2017 at The John Carroll School Summer Community Theatre— 703 E. Churchville Road in Bel Air, MD. Tickets are available for purchase at the door or in advance online.

2 thoughts on “Peter Pan at The JCS Summer Community Theatre”

Review: The Sound of Music at The JC Summer Community Theatre