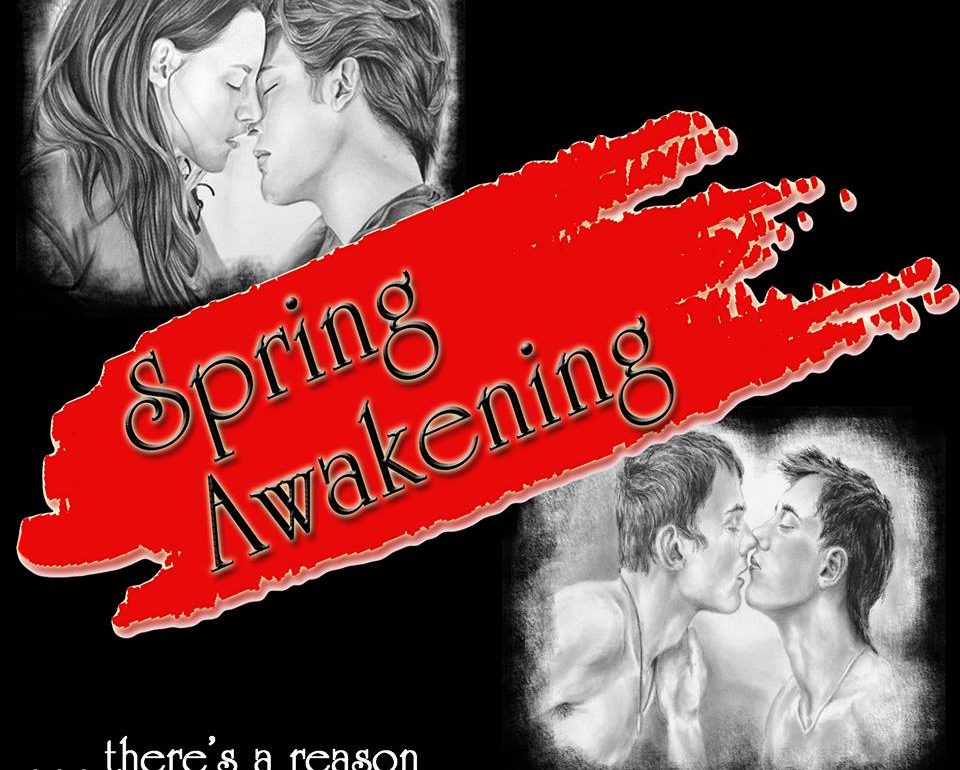 11 July and the question is shame. Will you feel shame if you don’t go and see Spring Awakening at The Audrey Herman Spotlighters Theatre this summer? The answer is yes. Shame is a product of education, but do not remain ignorant to this impressively evocative and intimate piece of highly charged sensual musical theatre. Directed by Jillian Bauersfeld with Musical Direction by Michael W. Tan, this gripping and moving musical drama traverses the controversial plains of adolescence blossoming into maturity despite the deliberate ignorance engrained from the religious and parental rule that governs the time. Remarkably sharp and poignant, this production does not shy away from intimacy in any regard, fully utilizing the extremely personal and intimate play area of the tightly compacted Spotlighters stage.

When a story is as beautiful as Spring Awakening, you let the music guide its telling. Resident Scenic Artist Alan S. Zemla knows this well. The scenery is uncomplicated; the only true deviation from the traditional Spotlighters’ setting is that the pit— usually occupying the forward corner at the theatre’s main entrance is now tucked away in the aft corner near the backstage. Floor Artist Fuzz Roark paints four wickedly spindly black trees converging upon one another at the stage’s midpoint to create the illusion of a forest, which is symbolic as the forest of adolescence can be a winding and distorted labyrinth, especially when unexplained to those attempting to fumble their way through it.

Costume Designer Amy Rawe Weimer follows a similar approach when it comes to simplicity. Although the costumes reflect the era and locale wherein Spring Awakening is set originally, they are basic and nothing overly fanciful. This allows the audience to pay attention to the stories being told, to the struggle being experienced, and to the wonders being discovered rather than unearthing distraction in the vein of sartorial selection. The mauve lace affair saved for Ilse is divine, perhaps the best of the bunch, though a close second is the cornflower blue and grape floral patterned dress that Wendla wears for the majority of the production.

Director Jillian Bauersfeld lets the modernity of the show ring through in the musical composition, as well as in the seriously spiked hairstyles featured on the fellas. With a show like Spring Awakening there is a great temptation to attempt modernization through aesthetic, properties and scenic designer, and even attitude and portrayal of the characters but this a trap that Bauersfeld cleverly avoids, letting the music do as it was designed to do, creating a strong amalgamation of past and present with the script and subject matter catering to the then and the rocker instrumental sounds as well as the lyrics catering to the now. Refusing to shy away from the intimacy of the show— on both a sensual and sexual level— Bauersfeld puts the sexual energy and emotional vibrations palpably forward, making them a forward focus of the show. Gyrations and touches are right in your face, how else could they be on such an intimate stage, but rather than back down from this, Bauersfeld embraces it fully and pushes it wholly onward, making for a rich and robust experience of the story.

Choreographer Amie Morrow Bell finds an ethereal energy to infuse into the slower routines featured over the course of the production. This dreamlike movement, almost like wisps gyring through the human body, seizes numbers like “The Word of Your Body” and transforms it into this empyreal union of imperfect bodies. Contrarily, Bell puts forth a surge of rock-charged choreography for “The Bitch of Living” and “Totally Fucked”, two numbers that not only require but demand a harsher dancing approach to match the gritty and brutal style of the music and sense of the lyrics.

It is impressive to see the girls— Martha (Alyssa Bell), Thea (Ana Johns), Anna (Rachel Verhaaren) and Ilse (Ellen Manuel)— bringing so much ferocity to “Mama Who Bore Me (Reprise).” The fierce tenacity that rages through this female number is the same rage-born drive that carries the boys through “The Bitch of Living”, and culminates in the coed number “Totally Fucked.” Alyssa Bell, playing Martha, has her moment to shine in the spotlight during “The Dark I Know Well.” Flood-lit in red (by Lighting Designer Laurie Brandon) this number is one of the heavier and more harrowing of the darker numbers included in the show. Ellen Manuel, as Isle, joins her in this duet and carries the intention of its lyrics heavy in her voice. Manuel, who is free-spirit (and instrumentally talented as showcased by her guitar plucking), shines like a diamond in the rough later during “Blue Wind.” Delivering a spooky and yet strangely serene lullaby with this number, Manuel’s voice is almost the salvation Moritz needs in the moment of this song’s arrival. When she joins the Mortiz character in duet for “Don’t’ Do Sadness/Blue Wind”, it is truly haunting.

The boys are laden with sexually charged energy, right from the moment they begin stomping and growling their way through “The Bitch of Living.” Otto (Brendan Hale), Hanschen (Aaron Hancock), Georg (John Endres), and Ernst (Chris Weaver) each have their line of solo in this number, displaying their vocal fortitude and impressive ability to carry the trickier melody lines in addition to strongly blending the harmony lines. Aaron Hancock, as Hanschen, is slippery and sex-driven, saucy and flirtatious, especially when it comes to playing opposite Chris Weaver’s Ernst. The create a delightful duet late in the production with “The Word of Your Body (Reprise)”, though Hancock’s most memorable moment is his masturbatory scene played opposite the mincing shuffle of the Male Adult (Marc Korol-Evans.)

The most intriguing and empathetic character among the misguided and ignorant youths is Mortiz (Jim Baxter.) With a striking physicality that perpetually puts forth a frenetic vibration— be it of nerves, anticipation, or uncontrollable urges and desires— Baxter grabs hold of the audiences’ attention and does not relent on his grip until the bitter end. With a soaring siren’s voice, he takes the lead for “And Then There Were None”, and quickly establishes his sound in other ensemble numbers. Watch the physical manifestation of all his unchecked anxiety, angst, and internal turmoil— it presents predominantly in his shaking hand in the second act— as this is a true tell for the hundreds of thoughts tearing his mind asunder. Baxter roars from a place of soul-searing destruction for “Don’t Do Sadness” but tempers that same emotional vein and transforms it into soothing tones for his portion of “Those You’ve Known.”

Leading the female charge in this show, Wendla (Allison Comotto) is the doe-eyed innocent paragon of youth. Her naiveté is so present its palpable and written clearly all across her face. Even in the scene when she is forced to confront her mother (Adult Female— Tony Korol-Evans) in frustration and fury, Comotto’s blind-babe ignorance dominates her expression. Her voice, like a songbird, delicately invites “Mama Who Bore Me” into the world, serving not only as the show’s opening but as the audience’s awakening to her fretful journey of discovery. The epitome of winsome and sweetly ignorant, Comotto serves the role well, particularly when in duet with Melchior (Sean Dynan.) Both “The Word of Your Body” and “Whispering” becomes haunting tunes that wend their way around the pair’s voices with “Whispering” being a ghostly and mournful cry that tears at the heartstrings as her plight becomes painfully obvious to everyone but her.

Sean Dynan, as the rebellious Melchior Gabor, delivers a stunning clarity when speaking and singing in this character. There is a mature facially-frontal sound that he creates both when speaking and singing the sets the character just on the edge of maturity beyond his teenage years. “All That’s Known” sets the tone for his character’s story arc and carries him well as a disturbing reminder throughout the progress of the show. There is an emotional stability that wavers in his character; the sense of knowing yet still discovering and sharing this recklessly forbidden knowledge is portrayed clearly and consistently throughout despite the spikes and dips in pathos along the path. Dynan masterfully pours feeling into “The Word of Your Body” as well as his soulful rendition of “Those You’ve Known” when the truth seizes him in the finale moments of his story.

The song of purple summer is here; the haze is rising over at Spotlighters Theatre. Will you heed the call and experience the glory? Will you learn the story?

Spring Awakening plays through July 30, 2017 at The Audrey Herman Spotlighters Theatre— 817 St. Paul Street in the historic Mount Vernon neighborhood of Baltimore City in Maryland. For tickets call the box office at (410) 752-1225 or purchase them online.

The Wiz at Spotlighters Theatre
Close