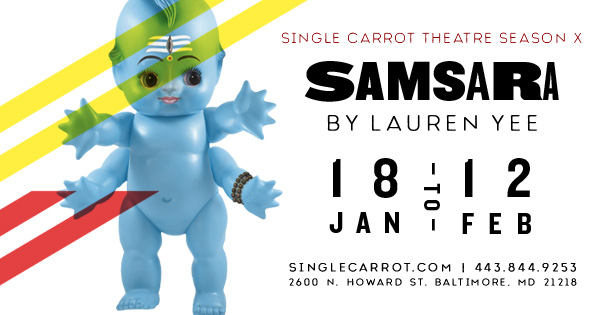 We come back as something else.

That is the cycle death and rebirth to which life in the material world is bound.

The Hindu and Buddhist belief of the above cycle, now readily incarnate in the thespian belief of performance by way of playwright Lauren Yee. Now appearing on the Single Carrot Theatre mainstage as a part of Season X: A Love Letter to Baltimore. Directed by Lauren A. Saunders, this stirring piece of theatricality toes the fine line between absurdist comedy and gripping emotional drama, settling into the bosom of magical realism along the way. With a profound message, a broadly approachable, albeit controversial, topic of discussion, relatable characters and human situations, Samsara is in itself a beautiful cycle of life, death, and rebirth upon which theatergoers may satiate their need for humor, emotional catharsis, human connectivity, and a deeper understanding of the circle of life. Brilliant in its penned existence as well as its current conceptualization, Samsara is a life-altering experience that will leave you pondering, and questioning the world as you know it to be.

Be born into the magical realism that accompanies Lauren Yee’s work; accept that this is the reality in which portions of the play exist and it will become exponentially more enjoyable and more deeply meaningful as it unfolds. We live in our imaginations and our imaginations live outside of our heads making for a wildly intriguing reality. Keeping this in mind will allow the brilliance of Yee’s work to settle easily into the brain. Even without the magical realism and borderline absurdism, Yee’s play addresses a great deal of worldly topics— the need to have a baby, the difficulties when one cannot conceive their own child, the experience of pregnancy, cultural norms and differences when addressing these subjects— as well as subtly layering social commentary about cultural disparity into the subtext of the work. Remarkably fluid, despite the lapses in time and location, Yee’s play is profoundly astonishing and leaves the mind spinning in a pleasant blur of experiences and provocative questions.

Director Lauren A. Saunders finds an exceptional balance between the edgy absurdism of some of the dream and nightmare style sequences laced into Yee’s magical realism and those moments of brutal non-enchanted reality. Saunders blends all of these elements together fully, creating a smooth theatrical emulsion of wonder and authenticity. Augmenting this hybrid reality, Saunders pulls an intelligent creative team into the mix including Scenic Designer Jason Randolph, Lighting Designer Thomas P. Gardner, and Sound Designer Steven Kriegel. Randolph’s interlocking rolling wave-shaped set pieces create an ease of motion when the scenes flip back and forth from one to the next, while Gardner’s illuminating cues help bring the dream world and reality in and out of focus. Following in that vein, the pulsating projections on the river-stream screens help to ground each of the locations in their own realities, creating deeply dynamic layers of existence on multiple levels of the production.

Though Sound Designer Steven Kriegel deserves a nod of praise for tying all of the aforementioned design elements together, it’s his chintzy yet charming interspersing of cartoonish 1950’s family style television jingles that put the finishing touch on the performance. Painting a quaint soundscape filled with picture perfect cheer, Kriegel uses those little snippets of musical sublimity to create a false sense of unwavering glee and surefire security, the same way one might feel fondly at peace when watching Bewitched or I Love Lucy, the all-American wholesome television classics. Juxtaposing these sweet moments against the harsher sounds Kriegel employs during scenes in India highlights the cultural disparity which Yee focuses on as a main point of contention in the work.

Saunders’ carefully expresses the intention and overall message of Yee’s work by assembling a brilliant ensemble of performers. A quintet of expressive performance talent concocts a wildly engaging theatrical experience that stimulates the mind, the heart, the funny bone, and the soul. Paul Diem and Alix Fenhagen, playing Craig and Katie respectively, just want a baby. What could be simpler? As the couple soon discover, such a simple notion is anything but, and so their cycle of hoping to achieve life begins. Diem and Fenhagen do an exceptional job of balancing the mismatched tensions between the pairing of Craig and Katie right from the beginning of the play. This balancing act, working in tandem with the stake-driven upward spiral of tension, makes the final explosion of raw emotions that much more rewarding and the blindsided ending deeply profound.

Diem plays a genial and earnest representation of Craig. There is a stillness inside of Diem’s approach that is striking and really grounds the character of Craig in his own reality, particularly when it comes to discovering the way life actually is outside of what it is he thinks he wants. His interactions, both with the Katie character as well as the Suraiya character are deeply intriguing. Fenhagen, as Katie, takes a much more flippant approach to her character, with her deadpan and emotional confusion making it easy to dislike the somewhat static character. But Fenhagen plays Katie’s scenes sharply and fully, delivering them in such a way that they build into a fully completed puzzle. Fenhagen’s interactions with The Frenchman (Dustin C.T. Morris) are the more invested moments she outs forth in the performance; they are humorous as well as engaging.

Morris, whose primary character is that of the outrageous Frenchman with his equally outrageous and stereotypically caricaturized accent, exists in a separate reality from the actuality of the play, as does Amit (Utkarsh Rajawat.) Though their characters are polar opposite in construction, creation, and execution— they even live in different alternative dream-state realities—  Morris has more in common with the Amit character than any other, and the subtle nuanced work that goes into exposing these similarities should not go unappreciated. Morris’ character work earns a great deal of hilarious responses from the audience but when the great plot-twisting shift occurs, he grounds himself in the severity of the moment quite intently.

Playing Amit, Utkarsh Rajawat creates a precocious character out of the unborn baby, bringing a new level to the notion of anthropomorphizing characters. Rajawat has a sassy tongue, a flippant yet funny irreverence and a charming arrogance that fills the character out in a way that is most amusing while still carrying the tender and more touching moments of the script with a great respect. Only truly exchanging acknowledged interactions with Suraiya’s character, played with brilliance and grace by Saraniya Tharmaraja, Rajawat furnishes Amit’s reality with a surprising emotional scope, enhancing the dynamic interplay between fetus-parasite and “microwave-host” surrogate.

Tharmaraja, whose inherent conviviality radiates through the character with even-footed consistency, brings a refreshing approach to the character of Suraiya, which could potentially run the risk of being played somewhat statically and into the inherent stereotype of the culture. Tharmaraja handles the character arc of Suraiya beautifully, pulling the audience into her portion of the narrative and drawing the attention to the struggles of her life, completely splitting the focus between her emotional turmoil and that of Katie and Craig’s. This makes for a compelling piece of dramatic theatre, whilst still being infused with heart and humor.

Having a baby should be as easy as falling out of the sky, shouldn’t it? This is a rare gem of a theatrical production, fluently cohesive and emotionally articulate with striking performances contained within, a must-see this 2017 calendar year.

Review: Year of the Rooster at Single Carrot Theatre
Close