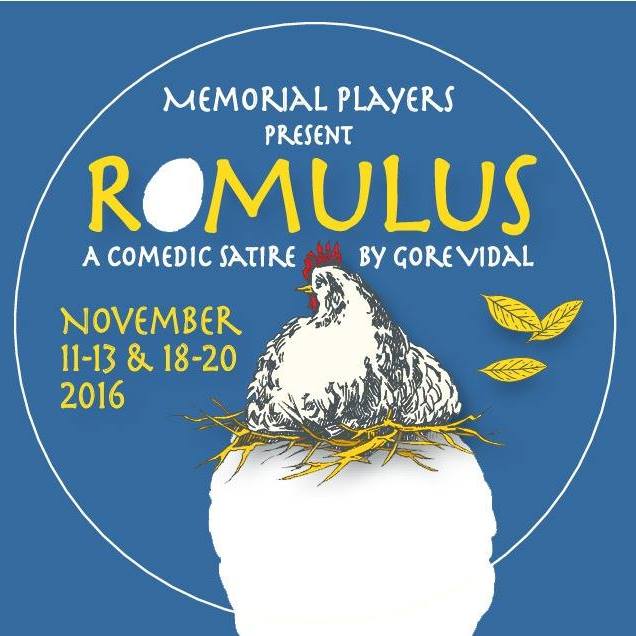 When tragedy only suits cold climates and comedy best suits the situation, will you find yourself prepared to— make Rome great again? I call upon you now— friends, countrymen, Baltimoreans! We call upon you in this time of irreproachable past and uncertain futures to live in the now! Live without great expectation but also without fear! Live in the present moment and presently get yourself to Memorial Players in Bolton Hill to see their production of Romulus, a comedic satire written by Gore Vidal. Directed by Rina Steinhauer and Produced by Kristine Smets, this exceptionally well-performed satire is both potent and relevant to the current situation in which our great nation finds itself and is exactly the balm of humor and hope required in such difficult times.

A proper Roman palace, even if it is tucked away in Tivoli, is befitting for the great emperor because of Set and Stage Designer John Seeley. With fine attention to patterning in his approach to detail, Seeley sets the stage with columns, painted walls, and busts galore. The garden off to the side is lavish and simultaneously simple, rounding out the symbolic representation of the emperor— who is both extravagant in his gold-leaf spending and chicken-raising and yet simple in his approach to politics. Filling in the show’s aesthetic with illumination and aural enhancement, Lighting and Sound Designer Daryl Beard provides delightful cues for follow spots, organic daytime lighting, and even the humorous cluck of chickens, which becomes a very important, albeit subtle, inside joke as the play progresses.

Hats off to Costume Designer Christine Calderon, and her team of a half-dozen Costumers— Clare Booth, Debi Celnik, Julianna Lucas, Sharon Lucas, and Alicia Williams— for their miraculous work in outfitting the show to its authentic Roman era in 476 AD. Togas galore, and appropriate gowns for both the wife and daughter of the emperor make all the difference in giving the show a realistic feel. Calderon and her team even throw in delightful little humorous intricacies into the production, like the chicken-print cummerbund on Nuntius (John Seeley), the show’s narrative figure. Calderon and her team’s work is particularly appreciated in the way the approach the Goths and their leader, with true-to-modernity approach making them look like a marching brigade straight out of Hot Topic.

A special recognition is owed to Stage Managers Emily Bowden and Olivia Steinrock for their efficiency in moving scenic transitions. A sluggish scene change can make or break the pacing of a show; Bowden and Steinrock deliver the most astounding representation of ‘total mobilization’ of their run crew ever experienced in community theatre (at least in the last five years) with their change from the first to second scene during Act II. Their driven enthusiasm to ensure lightning-quick changes, in addition to Rina Steinhauer’s precision direction keeps the show rolling along with a robust energy at which any Roman would proudly smile.

Performances across the board are divine. Whether it’s the marching Goths (Richard Ash, Monty Howard, Hal Pollard, Derek Sullivan) who appear briefly at the show’s end, led by the yes-man Theodoric (Ned Pollard)— who is simply a scream with his yes-man attitude in regards to his uncle— or Nuntius (John Seeley) who gives engaging yet laughable narrative accounts at the top of each scene; every performance given throughout the course of the production is done so with panache and in such a delightful manner that nary a bad thing could be said about any of it.

Pyramus (Nancy Kelso) and Achilles (Richard Peck) are striking dashes of humor when it comes to playing the servants to the Emperor. Their little hints of deadpan dry wit are simply delightful and the pair well understands the subtle nature of playing comedy on the lighter end of things between one another. Tullius (Ryan Tisch) serves as the heavier hand of deadpan, his snarky and sarcastic commentary and little affected moments causing quite the chuckle throughout the production. Chef (Kristine Smets) too throws her toque into the ring when it comes to adding little laughable moments, particularly when it comes to the chickens.

Cameo characters who really have the knack for melodramatizing caricatures come in the form of the wildly ostentatious art dealer Apollonia (Kim Scaglione) and Zeno (Mark Herbkersman), King of the Byzantine. Though Scaglione and Herbkersman have vastly different characters, their larger-than-life approach to them is quite similar. Both the arrival of Scaglione’s Apollonia and Herbkersman’s Zeno absorbs every breath in the room and their personalities overpower— in the funniest way possible— that of everything else on the stage. Scaglione imbues her character portrayal with a fabulous sense of affluence and entitlement, while Herbkersman is much more of a seedy charmer, completely engrossed in his character’s own self-interests. The pair are hysterical and quite the driving factor in moving the plot forward.

Titus (Ryan Frank) our weary warrior never loses steam and is quite hilarious when it comes to trying to achieve his objective. Frank is almost spastic in his delivery and really riled up over the trivial way his character is so readily dismissed. Trying to process the heavy news bestowed upon him by the great emperor shows his versatility as a performer as well. But Frank is not the only soldier that makes an appearance in the production. In addition to the bumbling Metellus (John Lisch)— whose intermission speech is just hands-down winning the entirety of comic gold— a last-minute appointed general, there is another warrior of the battlefield who takes the show’s ultimate comedic tone in a darker direction. Aemilian (Sean Dynan) sweeps onto the stage and there is a palpable disconnect from the show’s ripe comedy to the severity of his situation.

Dynan carries the character with a rigid edge, darkened outlook, and ultimately a weighted gravity that calls recognition to the severity of the situation in which his character has been living. Dynan, despite his intentionally wretched makeup (which is applied exceptionally well to make him look tortured and corpse-like), does find a softer side, if only briefly in moments of encountering Rea (Kaite Vaught.) With a sweet disposition when it comes to love, Vaught is the quintessential ingénue type character, though not without her sassy teenage quirks, making her character both relatable and modernly relevant to the overall situation.

Otto Rumpf (John Dignam) complicates Rea’s ideas of love significantly with his arrival, but what’s notable about Dignam’s character is not his corruption bent on unifying his industry with Rome by marrying the young daughter of the emperor, but rather his striking characteristic resemblance to a certain present-day politician. Let me just say, it’s ‘uge. Dignam does a fine job of balancing the character portrayal without directly imitating any particular orange menaces so that we get the joke without having to cringe over it. His humorous approach under Steinhauer’s direction is exactly what is needed to allow audiences to see light at the end of our present-day tunnel.

Ottaker (Alan Rosenberg) may not appear until the penultimate scene but definitely makes his presence felt as one of the few characters that carries severity and weight in his delivery in addition to excellent comedy. Rosenberg’s accent is brilliant and easily understood, maintaining its thickness without compromising its clarity. His interactions with the great emperor Romulus (Terry O’Hara) are truly the pinnacle moment that defines the play— a beacon of hope as it were. This comes in astonishing opposition to the moments Romulus spends with Empress Julia (Laura Weeldreyer), whose withering glares in his general direction could wilt even the staunchest cacti. Both Weeldreyer and Rosenberg have poignant moments shared with O’Hara that really ground the reality of the production. This is particularly notable during the dissonant exchange between Weeldreyer and O’Hara at the top of the second act, where bodies say one thing and words another.

Terry O’Hara is phenomenal in the titular role of the production. There is a mask of comedy which he wears, showcasing Romulus as an almost insipid buffoon that really endears the audience to his humors. Beneath that mask lies an astonishing dramatic performance that really clutches at the heartstrings in exactly the right moments. There is a pristine equilibrium articulated in O’Hara’s smart delivery; he knows when and where to let the flippant irreverency radiate through and when and where to reign in those comic notions and present instead that powerful and harrowing gravity of sincerity. A remarkable performance given, which is matched on every level by his cast, O’Hara owns the character, which ultimately makes the show a perfect success.

Whether you want escapism, a good comedy with a hint of drama, some fine acting, or just an overall good theatrical experience, Romulus at Memorial Players has it all and should not be missed.

Running Time: Approximately 2 hours and 4o minutes with one intermission

Romulus plays through November 20, 2016 at Memorial Players in the Memorial Episcopal Church— 1407 Bolton Street in the Bolton Hill neighborhood of Baltimore, MD. As a part of their mission, all performances at Memorial Players are free to anyone who wishes to attend, patrons are seated on a first come, first serve basis.