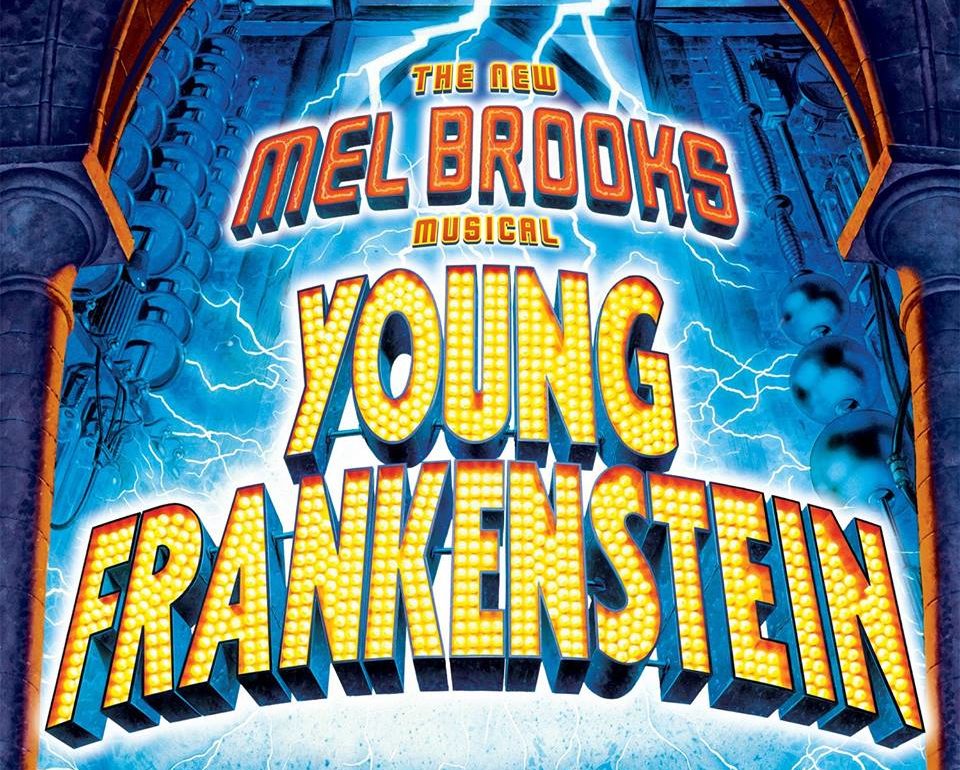 The intricate nuances of detail that are brought forth in this production are a well-spoken testament to the overall vision that Director Tommy Malek has brought to the show. In a decadent homage to the original Mel Brooks’ film, Malek has designed a series of opening credits set against a black and white projection of the Transylvanian castle, a classy nod to the film and its inspiring origins to thoroughly prime the audience for the whole zany experience they are about to witness. Carefully honing the balance between paying tribute to the film and the original Broadway production and creating something wildly unique, Malek delivers a practically perfect production with exceptional casting, strong choreography, and a string of other surprises that you’ll simply have to see to enjoy.

Malek’s decision to use ‘canned music’ is a smart one as he’s chosen a high quality sound, giving a professional polish to the overall presentation of the musical numbers. Musical Director Nathan C. Scavilla brings his practiced expertise to the production when it comes to strong harmonies featured throughout the show. Inspiring enthusiastic energy abound, Scavilla works with Malek to ensure that the larger group numbers, like “Transylvania Mania” and “Hang the Doctor” are bursting at the seams with vocal vibrancy. Scavilla also deserves nod of praise for the Barber Shop Quartet harmonies he works into the entire ensemble of villagers for “Welcome to Transylvania” with the most sublime bass sounds resonating out of ensemble members Thomas Ogar and Don Patterson.

In addition to Malek’s eager energies, his well-practiced Choreographic work is readily available to virtually every dance routine featured in the show. With a nod of praise owed to Tina Marie DeSimone for her tap routine work featured during “Puttin’ on the Ritz”— complete with leg-swinging cane lines and kick lines— the dance numbers featured throughout a part of the jolt of electricity that keeps the performance rolling forward. Malek works animated moves and gestures into show-stoppers like “Transylvania Mania” but keeps the routines simpler for smaller numbers like “Together Again.” Balancing these dance routines with his overall blocking— especially the incredibly clever and witty execution of the horse-cart hayride for “Roll in the Hay”— Malek proves his impressive aptitude for understanding the show and how to fit it to his cast and to the stage.

Doffing the additional cap of Master Wig Designer for the show, Malek tops off the impressive cultured couture of Costume Designer Caroline Jurney. Each of the principal costumes look divine, each garment well suited to not only the characterization of the character but to the unique persona that each actor then brings to said characters. Jurney works with Malek to craft the perfect look— everything from the simple black garb found on Igor to the maddening merlot and black velour ensemble used for Frau Blücher. Malek’s wig work is pristine and is a solid compliment to Jurney’s sartorial selection; the team rounds out the creepy old world aesthetic of 1934 Transylvania with elegant ease.

Polishing off the show’s overall aesthetic in the vein in which Malek inspires, Set and Sound Designer Alex Porter as well as Lighting Designer Jeremy Mayo create the hype that one would expect from a diabolical doctor turned mad scientist when it comes to things like special effects. Porter and Mayo work exceptionally well together, particularly for the scenes in the laboratory following “Life, Life” and preceding “Hang the Doctor.” The spooky appearance of the various bits of the castle are perfectly nestled into the overall verve of the comedic thriller, showcasing Porter’s working knowledge of the show as well.

Noteworthy ringers in the ensemble include the Village Idiot, as played by Adam Abruzzo, and ‘Character Boy’— the one with a few extra lines here and there in group scenes— as articulated by Derek Anderson. Both Anderson and Abruzzo have full rich vocals, which accompany Inspector Kemp (Michael M. Crook) for the lead-in to “He’s Loose” and are easily noticeable in other group numbers. Crook, as the surly inspector, fills a tall order when it comes to the comically inclined man, exaggerating his limp and mechanical arm in perfect synchronicity with the sound effects that accompany the movements. Delivering a flawlessly melotheatrical accent, Crook does the good inspector justice when it comes to marching about leading the villagers on their angry-mob-style tirades.

Don Patterson, whose aforementioned rich bass sound mellows out the bottom line in the barber shop quartet number “Welcome to Transylvania”, is given the cameo role of the Blind Hermit in the second half and he hams up every moment of his sightless shenanigans for the entirety of his time on stage. “Please Send Me Someone” is most definitely a scene-stealing moment for Patterson, if not completely a show-stopper simply for the expressive vocal quality which he is able to impart upon the song. His comic timing is sharp and well delivered, especially once he encounters The Monster (Christopher Kabara.)

In a beautiful tribute to Peter Boyle, Kabara gives a tremendous nod to the film role originator (and a slightly subtler nod to Schuler Hensley) with his expressive facial features and wild moaning and groaning, especially during the iconic “Puttin’ on the Ritz.” Kabara finds his own inner monster as well and unleashes it upon the production, which is striking in both its delivery and overall impact on the show. Between his sturdy handle on his reanimated body and the way his goofy grin alternates between wide and gaping and furiously scowling when terror or fear sets in, there’s something inherently charming about Kabara’s rendition of the monster, and when he does find his voice (quite late in the performance) it’s deep and lovely.

Everybody loves to get a surprise, especially when it takes on the form of the talented Ashley Gerhardt punching her way with panache into the role of Elizabeth Bennett. Madcap fiancé and an utter scene-stealing diva, Gerhardt affects a wild voice for the character, which rolls with ease into all three of her belt-heavy solos— “Please Don’t Touch Me”, “Surprise”, and “Deep Love.” Her characterization is out of this world, over-the-top, and completely effectual when it comes to delivering the hysterics of her character’s nature. Gerhardt takes things one step further and really delves into the saucy meat of her character, playing up little flirtations with everyone, including the surly and reserved Frau Blücher (Jean Berard.)

With a Transylvanian accent thicker than London fog, Berard masters her portrayal of the stoic matron. The shocker comes from her tremendous ability to belt and nail notes during her featured solo “He Vas My Boyfriend.” Blasting her way through that number in a fashion that truly knocks the audience off its feet, Berard delivers a memorable rendition of the song and the character as she laments the passing of Victor Frankenstein and her sordid relationship with the man before his death. Everything from her upright posture to her hilarious repartee with Gerhardt’s character cements in place the fact that Berard is perfection in the role.

There is no denying that Gerhardt and Berard are talented. There is no denying that Gerhardt and Berard are custom fit for Elizabeth and Frau Blücher respectively. And there is simply no denying that third of the trio of leading ladies is equally well-suited and holds her own with these theatrical veterans. Lindsey Landry bounces onto the scene as the delightful Inga. Bubbly and brilliant, Landry delivers an affected accent that holds its own against the others in the cast. Her physicality inside the character of Inga is exceptional and she possesses the pipes to back it up, making a perfect package out of the role. “Roll in the Hay” showcases her vocal prowess as well as her yodeling talents, and the facial expressions she pulls throughout the production every time she encounters Frederick are to die for.

Together again for the first time (since Spamalot, quite possibly) Jeremy Goldman and Matt Wetzel are the team that people cry for— yes Frankenstein and Igor— to the point where it becomes a competition over who is hamming it up more thoroughly. Their camaraderie and chemistry is second to none, especially in the number “Together Again.” The way that Goldman and Wetzel play off one another serves as the through-line glue that keeps this well-knit production together. Bouncing off one another, sometimes literally as the case may be for Wetzel, the pair tackle the ups and downs of the plot, work their way through maniacal moments of special effects— the dynamic duo even improvs their way out of sticky situations when the nature of ‘live theatre’ rears its head. A more perfect match could not be asked for when it comes to these two.

Wetzel is a scene-stealing fiend. Throwing his A-game into the physical shtick of the character, particularly when it comes to his hump, Wetzel delights the audience with laugh after laugh and keeps them rolling in the aisles all through the show. His antics in the laboratory fall in line with the tension created in that somewhat serious scene while his shenanigans for “Transylvania Mania” inspire the entire company to barrel through the number with raging enthusiasm that makes the act one finale an honest show-stopper. Quirky beyond compare, Wetzel finds himself going toe to toe with Goldman when it comes to animated facial expressions.

Goldman all but steals the show as Dr. Frederick Frankenstein. Only to have Wetzel steal it back, inciting a tug-of-war over who’s running away with the performance on their cloak-tails. Putting the flavoring of Roger Bart with a sprinkle of Gene Wilder into his own unique creation, Goldman delivers a stellar performance as the good doctor. His whacky facial expressions— mostly just the eyebrows— are an honest scream. Deserving multiple commendations for not only his pristine vocal clarity and intonation, but also his ability to patter on point, numbers like “The Brain” and “Life, Life” are fully loaded with a spark of creation and a jolt of exclamation once Goldman gets to singing them.

Don’t miss your chance to be part of the happiest town in town— it’s Columbia right now by way of Transylvania— come on down to see Young Frankenstein and you won’t be sorry that you did!

Young Frankenstein plays through October 30, 2016 at Silhouette Stages in the Slayton House Theater of Wilde Lake Village Center— 10400 Cross Fox Lane in Columbia, MD. For tickets call the box office at (410) 637-5289 or purchase them online.

Review: Next to Normal at Silhouette Stages
Close