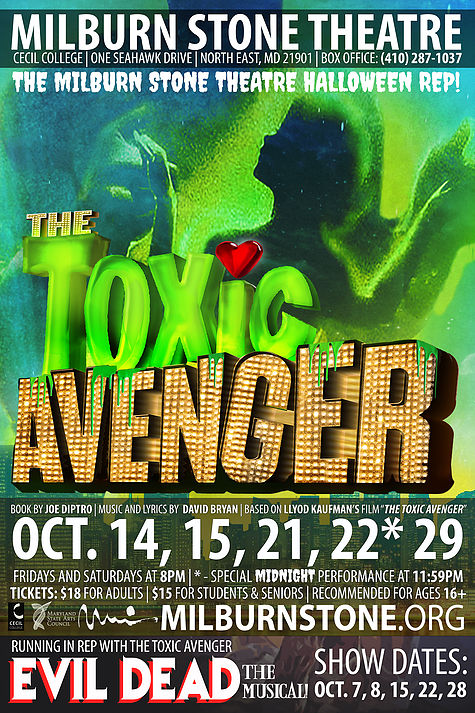 There is a place between heaven and hell— don’t need a map, just follow the smell— all the way up to Milburn Stone Theatre! New Jersey has come south for the back half of the Spooktacular Halloween repertory cycle at MST and it’s brought with it The Toxic Avenger! Loosely based on Lloyd Kaufman’s film The Toxic Avenger with Book by Joe Dipietro and Music & Lyrics by David Bryan, this oozing green nightmare is matched to camptastic perfection against its repertory running mate, Evil Dead: The Musical. Directed by Andrew John Mitchell with Musical Direction by Anthony Vitalo, this gruesome green groaner of a cheesy, campy musical will give you plenty to laugh over and even more to marvel at when it comes to the absurd happening on stage.

The toxicity is flowing heavy and hard over Scenic Designer Bob Denton’s playground-style set. With oozing barrels that stack atop one another like a filthy throne of nuclear waste, Denton’s main set piece is quite the eyesore, which is perfect for the revolting nature of everything happening in the show. Complete with rolling drums and barrels of the odious ooze, Denton pays fine attention to his coloration, particularly the florescent greens used throughout the set. This is echoed in the Properties work of Master Proptician Eyvo Johnson. With a glow-in-the-dark spawnling and gnarly body parts, Johnson has the props of the show well in hand. A special nod goes out to his fine work with the bleach-guns, looking a bit like childhood gone wrong in their super-soaker modeling.

Tying together all of these scenic elements is the illuminating work of Lighting Designer Bevin Hensley. Using a smooth blend of green and blue to often create a toxic teal, Hensley knows how to combine various hues to recreate lighting in the vein of B-grade horror films. Floating along down the river of hokey campiness, Hensley infuses some of the more melodramatic numbers with bursts of “emotional lighting”, pushing the cheesiness of these moments to their maximum potential, which ultimately creates hilarity for those watching. Add in Sound designer Moises Estrada’s Hulk-esque groans for the titular character and a few other well placed effects and you’ve got a ringer on your hands when it comes to humor.

Because there are only seven people in the cast, Costume Designer Lindsay Ellis has her work cut out for her, but she manages to create distinctive looks for everyone who plays multiple parts, especially the actress playing Mayor Belgoody and Ma Ferd. Her treatment of that dual costume for the Act I Finale, much like Director Andrew John Mitchell’s shtick-laden blocking, is clever and works the gimmick to its fullest comic potential. The Toxic Avenger outfit also deserves a nod as Ellis has crafted quite the look for the vigilante monster.

Musical Director Anthony Vitalo does an impressive job of providing good balance for the live pit, which is tucked off to the far side of the stage. Vitalo’s balance prevents major blowouts and overplays with great consistency throughout the production. He also inspires a strong energy among the vocal performers so that group numbers like the opening, “Who Will Save New Jersey” arrives with a ferocity to fully excite the audience. Coupling these sounds with Mitchell’s savvy approach to blocking results in a good use of the space for this madcap malady of a musical. Mitchell, much like Denton does with the rep-partnered show Evil Dead: The Musical, does not shy away from the utter absurdity that is required to make the show work. This is particularly true of the way he handles the “Mayor and Ma Ferd” confrontation witnessed at the end of the first act.

In addition to solid harmonies across the quaintly sized ensemble, the ‘characters of support’— William Bryant, Ariel Chaillou, Emily Jewett, and Dominic Santos— are an integral and impressive part of the production. Both Jewett and Chaillou do wonderful jobs as authoritative figures under the corruptive control of the Mayor. But it’s Bryant and Santos who are running away with the show as scene stealers. Between posing as thugs whom deliver the Mayor’s dirty work and later as hilariously foppish and over-the-top salon people (among other questionable characters) both Bryant and Santos are well worth their weight in humorous affectations. Bryant deserves a special nod for his hillbilly folk voice featured during “The Legend of The Toxic Avenger” as well, it’s sweet and slimy and all sorts of silly.

Lauren Hope Gates takes on the dual role of Mayor Begoody and Ma Ferd. Her distinctively affected vocalization for the characters is sharp. While the mayoral character has no particular accent to speak of, the Ma Ferd character has thick Jersey accent that helps differentiate her sweetly dispositioned elderly persona from the snide, sex-driven maven that rules the roost when it comes to corrupt politics. With a punchy voice that really packs a wallop for numbers like “Get the Geek” and “Bitch/Slut/Liar/Whore”, Gates showcases vocal tenacity consistently throughout the performance. Her heavy belts and hard carries in those and other numbers, as well as the grit with which she leads “Till the Monster’s Dead”— rotting it from the inside out with all the energy of Beauty and the Beast’s “The Mob Song” only on far darker levels— give her solid footing amid the slime of the show’s zany plot.

A completely ditzy and utterly adorable Sarah, the Blind Librarian (Lauren Spencer-Harris) is the apple of everyone’s eye, especially when it comes to Melvin (Matthew Peterson.) Spencer-Harris, who nails the notion of tripping about blindly with a few simple physical adjustments in her character work, is a perfect comic match for the peculiarity of the character. Her voice is strong and well delivered, especially during the hysterical duet “Hot Toxic Love” where the pair is practically combusting with passion over one another while gushing the lyrics away in each other’s faces. Nailing the number, “Choose Me Oprah”, Spencer-Harris has a keen concept of comedic delivery as well as timing when it comes to riding out the waves of ridiculousness written into these songs. She all but channels a spastically intentioned Kristen Chenoweth in both vocality and personality at varying degrees throughout the performance, making her that much more uproarious to watch.

Matthew Peterson is a mealy, milquetoast, and overall mellow little nerd named Melvin. With a surprisingly high tenor range, dabbling upward into a flattering falsetto, he approaches the dorky little character delicately. But once the transformation seizes him, Peterson lets loose a vocal monster that shocks the audience soundly. Watch the way he responds during “Disappointment” (another number wherein the utter shenanigans of supporting performers like Dominic Santos runs away with the routine) for a hint of compassionate sincerity when it comes to his reactionary responses. There is vocal sincerity featured in Peterson’s approach to the titular character, heard most readily in numbers like “You Tore My Heart Out”; this emotional integrity coupled atop his vocal strength makes for one impressive avenger.

With a few kinks in the staging and a few hiccups here and there, nothing that a good solid week of opening can’t sort out, The Toxic Avenger is ready to be your camptastic nightmare, and clean up all the pollution of your mind with its raunchy, radical, and all-round rowdy good time of a ridiculously, racy show.

The Toxic Avenger runs in a spooktacular Halloween repertory through October 29, 2016 with Evil Dead: The Musical at The Milburn Stone Theatre— 1 Seahawk Drive in North East, MD. For tickets call the box office at 410-287-1037 or purchase them online.

Review: Sunday in the Park with George at Milburn Stone Theatre