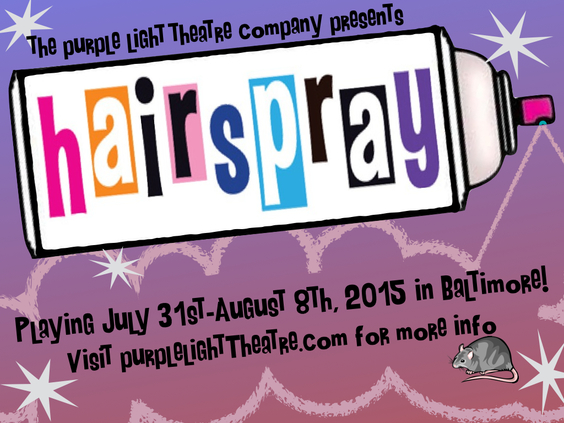 You can’t stop the beat as it bursts open in all the glory of the 60’s at the Purple Light Theatre Company this summer! Hairspray, the musical of Baltimore, is making a rampant return to the stage with this summer-based company, and bringing the nicest kids in town to the stage. Directed by the company’s Artistic Director, Tommy Malek, with Musical Direction by Benjamin Nabinger and Nathan Scavilla, the well-loved musical is shaking up local audiences with its spectacular dance routines, enthusiastic performances, and profound messages that still ring true today.

With a simplistic approach to the modern classic musical, the focus of the show becomes the performers and their performances, which enables audience members to hone in on the subtle nuances crafted into the characters, dance routines, and interactions among each other that separate this production from an ordinary performance of Hairspray. A nod of due credit should be given to Costume Manager Clare Kneebone for wrangling a vast assortment of period appropriate dresses and outfits that popped with all the inspirational color that the musical has to offer. This is particularly true of Tracy’s cupcake gown featured at the end of the show.

Director and Choreographer Tommy Malek turns Hairspray into a dance intensive experience that is truly rewarding for any theatergoer fond of energetic motion and heavily concentrated dance routines. The kids of the Corny Collins show rumble onto the scene with a grooving energy that accentuates all of their bee-boppin’ twistin’ moves giving the song the punch of pizzazz it needs to really start the show off on a high note. Malek’s choreography includes enthusiastic leaps, indefatigable run-patterns and a few unique moves thrown into sections like “Payton Place After Midnight.” There is an electric current pulsing through the dance numbers, particularly “You Can’t Stop the Beat” and “Run and Tell That” which keeps the show driving along at a breakneck pace. Truly a dancer’s dream, the choreography is what’s waking up Baltimore in this performance.

Performances are stellar from the ensemble to the principles and everywhere in-between. Whether it’s Little Inez (Valerie Armah) and her slick soulful upbeat pump during “Run and Tell That” or Brenda’s (Ana Johns) belt during the coda finale of “Mama, I’m a Big Girl Now,” (a unique place to have a featured ensemble solo) everyone is finding a place to showcase their innumerable talents. The cameos to watch are of course The Dynamites (Taylor Dodson, Renata Hammond, and Sydney Pope) who get to showcase their vocal prowess during “Welcome to the 60’s” and the Male and Female Authority figures, Kevin J. Anderson and Allie Dreskin, respectively.

Anderson and Dreskin become show stealers with their multiple portrayals of varying characters throughout. With a pallor made for black and white television, Anderson settles into the role of the Ultraclutch president with hilarious ease, but it’s moment as the crotchety school principle blowing Tracy out of the water with his screwed up facial features and crinkled voice that brings home the laughs. Outdone only by his role as Mr. Pinky, with an outrageous accent and flamingly flamboyant affectations to match, Anderson is a comic crack-up as he cycles through at least four different characters. Dreskin holds her own against Anderson, taking on the disturbing gym coach— complete with caterpillar eyebrows that are bordering on a monobrow— and the frighteningly sassy prison guard. Anderson nails the hilarity of Prudy Pingleton with her rigid character voice and vividly expressive facial features, especially when it comes to freezing permanent scowls on her face during “Mamma, I’m a Big Girl Now.”

Facial expressions are one of numerous highlights in this performance, which is a nod to talented performers and to Malek’s direction of the show. The intimate black box space and staging allows for the audience to experience these responsive and often animated emotions playing out across the character’s faces quite closely. The master of said facial animations is the man living up to his character’s namesake, Jeremy Goldman as Corny Collins. In perfect harmony with his slightly cheesy personality, Collins is pulling faces throughout the performance that make him the epitome of the flavorful but well-loved television personality. Watch him closely during “It Takes Two” as he tries to prevent Tracy from going gaga over Link. Goldman also gifts the performance with his smooth but warm vocals, leading “Nicest Kids in Town” and the ultra-entertaining rendition of the show’s title number with panache and flare.

Malek’s focal overtones of the performance are quite sexual, fair warning, but this is a brilliant and somewhat radical revitalization of a time gone by. The 60’s weren’t known for their June Cleaver manners and polite discourse, nor does this production try to brush the delicate polish of the 50’s onto anything, but particularly not the dance moves, or sexually charged energy among the characters. This is particularly true for Penny Pingleton (Katie Tyler) and Seaweed J. Stubbs (Patrick Campbell.) The pair have striking chemistry on stage the first time they meet, with Campbell’s pelvis popping like a New Year’s Eve champagne cork every time he busts a move. Campbell is all shook up like a soda pop, ready to burst his pocket rocket every time he and Tyler dance together, which supercharges their duet during “Without Love.”

Both Campbell and Tyler have wonderful voices and really get to showcase their uniquely vibrant approaches to these well-recognized characters throughout the show. Campbell is constantly making sexual gaga eyes at Tyler’s character, and when she’s not being a neurotic simpering nerd, she returns his affections in her own right. Holding her own vocally with the big girls in “Mamma, I’m a Big Girl Now” we get a taste of her belting abilities as well as her talent for maintaining her character voice while singing without compromising the tonality of the song. Campbell possesses this talent as well, and although does not have a pronounced character voice the way Tyler’s character does, brings all of his sexual energy straight into “Run and Tell That” making it one hell of a sweltering number.

Soul finds its home in this rendition of Hairspray with Miss Motormouth Maybelle (Tracy McCracken.) While it does take a bit to warm McCracken to the rhyming scheme of the character, she’s convivial and present in the moment. “Big Blonde and Beautiful” is a fun number that gets her spiritual engines revving in preparation for the 11 o’clock number, “I Know Where I’ve Been.” This number is a powerful and gripping ballad of the hard truth of the times, which McCracken delivers with passion. Once she finds herself in the song, about a verse in, there is no stopping her and her enormous voice, fueled by herculean emotions; a stunning moment if ever there was one.

Crabby and bitchy and downright despicable, Velma Von Tussle (Michele Guyton) lights up the stage in her Old-Bay glowing rage with “Miss Baltimore Crabs” and its reprise. Guyton is a pistol, the kind shot wildly out of the saloon doors after one has had too much scotch, and really lays into the insanity of the character with wild abandon. A vicious snake melodramatically executed, with a stellar voice to boot, Guyton brings an electrifying villainy to a role that can often be blasé. Proving that the crab shells don’t rot far from the bushel is Clare Kneebone as the plastically mean Amber Von Tussle. Having only one song to really showcase her solo abilities, Kneebone lays it on thick for “Cooties” really displaying her nasty streak. Giving a polished and articulated presentation of Queen-B realness in 1962, Kneebone understands snarky comic timing as well as vapid belittlement.

The show is packed to bursting with scene-stealing shenanigans, but the ham and grilled cheese combo platter is served up by Greg Guyton as Wilbur Turnblad. Delivering the character like a Muppet on crack, Guyton is a congenial whacko, an earnest eccentric, and an honest loony toon of epically animated proportions. Hamming up every line, move, and moment that he had on the stage takes theatricality to a new level and elevates Wilbur to the status of principle player. He’s too engaging not to love and too entertaining not to cheer for; the perfect blend of heightened hilarity meeting zany sincerity. Guyton is slick on his feet for “Timeless to Me” owning the duet with Edna (Roger Schulman.) His uproarious buffoonery overtakes the number with zeal making it the most entertaining routine in the show.

Schulman lives up to the astronomically high bar set not only by his counterpart Guyton, but by every famous Edna— locally and nationally— to come before him. With a sincerity that doesn’t require a thick dose of “hon-accent” overkill, Schulman finds the comfort zone of the Edna character with a natural ease and really plays her truthfully without falling into the trappings of being a caricature. This is a perfect blend and balance for the spastically spacey Wilbur and the pair are dazzling together. “Hold mommy’s chicken and waffles” may be the best line delivered in the show because of the force Schulman puts behind it.

Let’s not forget teenage heartthrob Link Larkin (David Woodward) who finds himself accidentally in love with our team player Tracy Turnblad (Amy E Haynes.) Woodword is the exact hybrid of every crooner personality from that era, pasted into an attractive body with subtly sexual dance moves and a smooth voice that carries numbers like “It Takes Two” to heavenly heights. His off-handed initial chemistry with Tracy is awkwardly adorable and when he settles his voice into “Without Love,” it’s a romantic fantasy come true.

As for Amy E. Haynes, a refreshingly and appropriately figured woman for the role of Tracy Turnblad, she’s putting her own interpretation on the character that really lets the Baltimore bad girl shine through. A harsher, edgier Tracy reveals herself during “I Can Hear The Bells” and in scenes with Amber. These moments are often overlooked by the 50’s charm that gets inadvertently cast on the show. Haynes’ Tracy is in earnest what a Tracy Turnblad was meant to be, a mover and shaker and a radical change maker. The humbling moment of sincerity comes during “Good Morning, Baltimore (Reprise)” where Haynes’ talented voice brings the brass and sass down a peg into a reflective and somber mood, really focusing on the emotional arch of the character in that moment. Energetic, wide-eyed, and bubbly, with backlash and bite for the right people, Haynes is serving up Baltimore-hon realness inside the loveable Tracy Turnblad.

Tickets are going quickly! Don’t miss your chance to experience Hairspray like it’s never been experienced before at Purple Light Theatre Company this summer.

Hairspray plays through August 8, 2015 at The Purple Light Theatre Company currently performing in The BBOX Theatre of MICA’s Gateway Building— 1300 W. Mt. Royal Avenue in Baltimore, MD. Tickets can be purchased at the door or in advance online. Reservations are strongly recommended as many performances have already sold out.