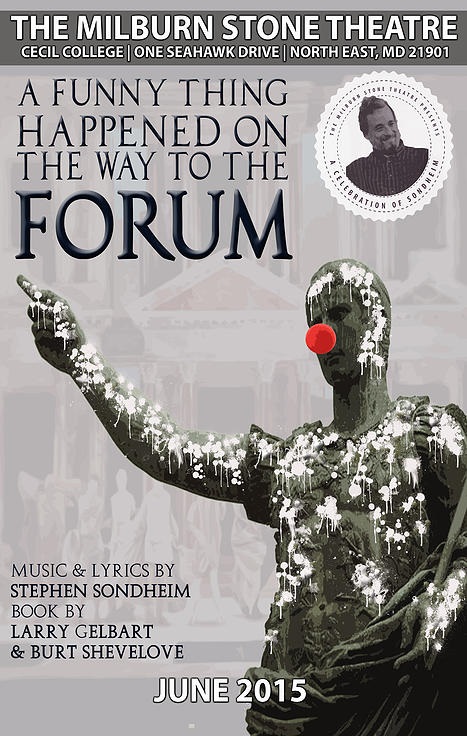 Old situations! New complications! Something for everyone at Milburn Stone tonight! A true feel-good comedy for everyone, one of Sondheim’s earliest musicals barrels its way through the doors at the theatre housed on the Cecil College Campus and is received to herculean applause. Directed by John Desmone with Musical Direction by Nicole Tart, this witty farcical evening of entertainment delivers on the promise of the show’s opening number, with comedy tonight!

Rome is looking splendid in its three house representation conceptualized and created by the theatre’s Technical Director Bob Denton. With gorgeous columns and full functioning second story balconies that serve as rooftops, Denton’s set is delightful and really sets the tone for the show as a whole. If you can forgive the modern doors (which, we will because this just might be Denton’s sense of humor swinging into play) the striking houses are unique in characteristics suited to their owners’ personal likenesses. The gnarled ivy and moldering green color that creeps its way up the house of Erronius reflects his age while the seedy layer of yellowed dust serves to reflect the shady dealings from inside the house of Marcus Lycus. Even the pristine white columns of Senex’ house is a reflection of the noble family that lives there. A remarkably constructed and aesthetically enchanting set that serves the show well, Denton raises the bar for the show on the whole with his excellent work.

Costume Designers Joyce Williams and Brenda Kinzinger are keeping pace with Denton’s scenic artistry by bringing lovely dresses to all the women of the performance. Keeping with the Greco-Roman era inspired threads they, like Denton, find ways to ascribe the personality traits of the characters to the garments bestowed upon them. This is particularly true of the lustily decadent yet simultaneously innocent white toga-gown featured on Philia, which showcases how desirable she is to men and how naïve she is. Williams and Kinzinger provide a humorous couture for Erronius and Hysterium, two characters whose namesakes describe their personality quirks and are reflected respectively in their outfits.

Director John Desmone delivers a mastery of Sondheimian understanding with this production, eking out the comic nuances among the cleverly crafted music and lyrics. Desmone’s biggest accomplishment is the honesty of the comedy that happens within the show. Finding the perfect balance between audience engagement and humorous storytelling, Desmone creates an enjoyable comedy that is well-paced, well-delivered, and overall well-done. The fun carries from the top of the show through to the final curtain and is particularly exciting at the top of Act II where Desmone guides the cast into an uproarious obliteration of the fourth wall, seamlessly wielding the reality of the play with the audience’s enjoyment of it.

Minor bumps and bruises situate themselves with the occasional production hiccup, and the only real disappointment to the performance is the lack of dance routines. Choreographer Bambi Johnson manages to slip a few simple steps in here and there, but for the most part leaves the movement of the show to its more natural musicality. The ensemble swells with the sound of a full classical amphitheater when it comes to full company numbers like “Comedy Tonight” and the “Finale Ultimo” under the Musical Direction of Nicole Tart. All in all, as Sondheim’s lyrics indicate, there is something for everyone.

Stealing the hearts (and eyes and other body bits) of every person watching during their introduction are Tintinabula (Stephanie Smith) and Gymnasia (Natalie Olynick.) The perfect pair of saucy bookends to “The House of Marcus Lycus” both Smith and Olynick seal their deals with seductive and sultry dance moves. With fluid synchronization to the risqué beat of their individual dance segments contained within the number, Smith and especially Olynick are turning heads here.

As a cameo character, Erronius (Peter Hayes) doesn’t have much of a chance to make his presence felt, but Hayes becomes a bona fide scene stealer when he makes his passes around the Seven Hills of Rome. Milking his moment for every delirious drop of comic gold he can muster, he seizes the moment, takes it for what it is— a bit written into the hilarity and madness of the rapidly-developing farce— and runs away with it. Hayes adapts the perfect voice and physicality for his character’s age, and his commitment to the staggering and stumbling shuffle of a walk he develops his hysterical.

Senex (Phil Hansel) and Domina (Mary Elizabeth Hartsoe) are perfectly matched in the sense that Hansel’s characters all but bows to Hartsoe’s. An indomitable force on the stage as her character’s namesake might suggest, Mullen-Hartsoe rules her portrayal of Domina with an iron scepter which reflects heartily in her posture, presence, and overall command of attention whenever she sweeps onto the stage. In addition to that triple threat performance, her singing voice is reminiscent of a classical diva with beltress powers that resonate through “That Dirty Old Man.” Hansel doesn’t stand a chance against her powerful personality, but holds his own in other arenas, particularly when it comes to singing his duet, “Impossible” with his son Hero. With a voice made to partner through this number, Hansel really finds the comic nuances in the lyrics and delivers with solidarity on them every chance he gets.

There’s sleaze and then there’s Marcus Lycus (Joe Francisco.) For a sense of sickening sensuality look no further than his introduction to the number “The House of Marcus Lycus” and watch him wheedle his way through the scene. Two-faced like the best of them, Francisco finds little moments to make his own, like posing as a leper and shrieking “Unclean! Unclean!” in his best character voice. Francisco lets the cowardice of the character quake through upon the arrival of Miles Gloriosus (Matt Cannon.) Tall, brutish, with an ego a mile wide (and just a hint on the scrawny side) Cannon is ironically named for the role considering he blasts his way onto the scene both vocally and physically. What he lacks in muscular appearance he makes up for with fabulous over-the-top acting, really hamming up the obnoxious character to its fullest potential. There’s even an incredible sound waiting in his windpipe for “Bring Me My Bride.” Stretching the character’s ego and hubris so that it fills the stage, Cannon is the best fit for the role.

It’s not a Sondheim (or any musical theatre show) without young lovers in love and Forum offers up Philia (Carly Rechenberg) and Hero (Gannon Webb.) Smitten and thoroughly twitterpated into stupidity with one another, Rechenberg and Webb are a match made in heaven for their parts respectively. Webb’s voice is like a warm scarf wrapping around Rechenberg’s voice in “Lovely” with the intent of protecting her from the chill of her character’s innocent ignorance. Rechenberg infuses this and every moment of her existence on the stage with bewildered bliss and her voice is a dulcet dream that sweeps along Sondheim’s melodies with ease. Webb’s facial expressions are to die for. Melodramatic, hysterical, and overall the cream of the expressive crop, pay close attention to the way he pouts, sulks, broods, and cowers— especially during the introduction of the courtesans— because each moment becomes a hyper-animated treasure that tickles the funny bone in a most rewarding fashion.

While Webb may have the facial expressions down to a refined art, Eyvo Johnson takes the role of Hysterium to knew hysterical heights using not only overly exasperated and exaggerated facial expressions, but a full-bodied engagement of these shenanigans that translates into comic genius. Fully hamming “Everybody Ought to Have a Maid” (a build-upon quartet featuring Hansel, Francisco, Johnson, and Cregger), Johnson is the comic crackup that leaves the audience rolling in the aisles. Addressing the audience in his own fashion with a glance or a gesture, he finds his own hilarious hiding hole among the plot devices and farcical phantasms of the show. With a voice that serves all of his songs well, Johnson bats the ball out of the park with “I’m Calm” giving us frenetic nerves which never stop bouncing against a delicate lullaby that flutters along gracefully. A remarkable performer, Johnson makes good on his character’s name.

Pseudolus….ah, what to say about Pseudolus. Pseudolus the funny? Too simple. Pseudolus the narrator? Too complex. Pseudolus the magnificent as played by Ted Cregger? That seems to fit the bill. With a strong urge and willingness to play with and engage the audience, Cregger drives the energy of the production and carries the dialogue of the show to the audience with aplomb and panache. Hilarious, exacting in comic precision and sincere when the moment calls for it, Cregger is a pillar of performance upon which the show’s foundation is built. His singing voice is superb, particularly for “Free” and even finds notes of earnest doting in his rendition of “Lovely (Reprise)” despite the song’s clearly comical intentions. A tremendous asset to the performance as a whole, Cregger makes the role uniquely his own and still makes it readily available to those familiar with the story.

A wonderful evening of comedy all over the place with lots of little nods to all sorts of things, including other Broadway shows, this production of Forum is well worth recommending to anyone who loves a good evening of theatre that will make them laugh.

A Funny Thing Happened on the Way to the Forum plays through August 16, 2015 at The Milburn Stone Theatre— 1 Seahawk Drive in North East, MD. For tickets call the box office at 410-287-1037 or purchase them online.

Review: A Funny Thing Happened on the Way to the Forum at Montgomery College Summer Dinner Theatre