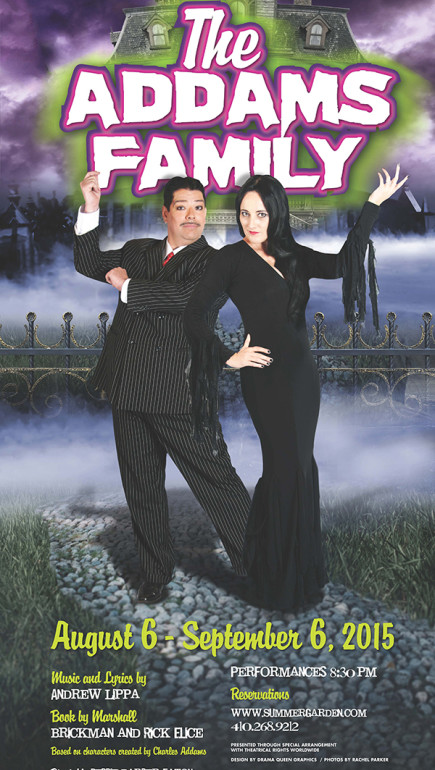 They’re crazier than you. That’s just the overview. And nothing up ‘til now has proved me wrong. With their wall-climbing spiders, creepy set, and kooky performers, the Annapolis Summer Garden is proving black is the new cool with their current production of The Addams Family. Directed by Debbie Barber-Eaton, with Musical Direction by David Merrill, this spooky production is anything but normal. And that’s perfectly fine as normal is relative— what’s normal for the spider is a calamity for the fly!

Drawing inspiration directly from the lyrics of the television theme show, Set Designer Matt Mitchell infuses creepy, kooky, spooky, and ooky into the Addams Family manor home which rests in the middle of Central Park on 10,000 undisturbed square acres of ancestrally deeded land. The full emersion effect of atmospheric aesthetic sets the eerie and unsettlingly humorous tone early on as the set is not limited to just what’s on the stage, but sweeps in subtle strokes through the entire house. The decrepit painted cemetery lines the back wall of the house, while the house itself looks every bit as dilapidated up on the stage itself. With a crooked staircase, gloom-burnished doors, and moldering wallpaper, the home’s darkly charming interior is fondly reminiscent of the cartoon sketches and the early black and white television show.

Working in tandem with Lighting Designer Matt Tillett, Mitchell furthers the shadowy atmosphere with projections of the full moon, pitched in resplendent wonder on the antiquated shingled roof of the building behind the stage, and gnarled tree-silhouettes on the side walls of the house. The show’s visual elements are perfectly ghoulish and accented superbly by Sound Designer Dan Caughran’s m spooky soundtrack. Caughran applies liberal doses of bizarre sound bits to heighten the Addams experience. But the finest work of Caughran and Tillett is the over-exaggerated effect they create for Alice Beineke’s poems. Triggering a deliriously delightful poetic trance every time she starts rhyming, an obnoxiously sparkling ting of a bell meets a blinding flash of blue and white lights to complete the vexatious moment, making it horrendously and brilliantly memorable.

Costume Designer Nikki Gerbasi toes the line of good work with a few misguided steps, mainly among the ensemble outfits. Gerbasi has exceptionally clever costuming tricks, like letting the hangman’s noose dangle from around the Puritan Ancestor (Nathan Bowen)’s neck. But some of the ancestor concepts are muddled, a Caveman (Kevin Cleaver) and Sailor (Brian Mellen) who both end up looking more like escaped mental patients, though the scary effect is somewhat amusing. Gerbasi hones in on the basic black shades of the main family, and by contrast the sprightly yellows of the Beineke clan. Gomez’ pinstriped suit is the epitome of flattering for his zany character. Morticia’s dress, however, is not fitted or restrictive in the leg department, though to Gerbasi’s credit, it does have a cleavage line cut down to Venezuela.

Wig and Makeup Designer Emily Karol is on a similar path as Gerbasi, though with many more steps in the right direction. The makeup for the ancestors is mild but appropriate giving them the right coloration of the long-since-dead. Her approach to characters like Granny Addams, Pugsley (alternatingly performed by Matthew Beagan and Drew Sharpe), Fester, and Lurch is a brooding plot of darkness and disaster which evolves these characters to look like the loveable icons upon which they are based. The one questionable choice Karol puts into the production is not giving Wednesday Addams a wig. With her long reddish-brown hair— even tied back in a thick braid— it looks out of place among the rest of the family. Karol excels in selecting the perfect long and flowing wig for Morticia, however, making the actress look like every Morticia who has come before her.

The Choreography is the show’s main disappointment. With such strong and talented vocal and character performances, (and as ASGT has a reputation for delivering energetic and intense dance routines for dance-heavy shows) there seems to be an unevenness in the movement and dance department of the show. Choreographer Jamie Miller does provide clean routines, the few that are there, and the intricate opening sequence during “When You’re an Addams” is the highlight of the dancer’s showcase. More of a case of missed opportunities than anything else, Miller does find a few spots here and there to get the ancestors moving while on stage.

Musical Director David Merrill brings the full sound of a well-populated ensemble to the stage for company numbers like “Full Disclosure”, “When You’re an Addams”, and “Move Toward the Darkness.” The four-part harmonies achieved in “Crazier Than You” are also a tremendous accomplishment on Merrill’s behalf. There seems to be an insurmountable amount of “riff-improvising” throughout the production, particularly with the principle performers, and in some places it feels natural and in others it feels as if they are attempting to show off. Finding the balance between just enough riffing and keeping with the original orchestrations is a minor struggling point in this performance.

The overall aural expression of the piece is well toned and delivered with solidarity, including a great dose of emotional commitment, particularly from Gomez, during numbers like “Happy/Sad” and the ever surprising “Morticia”, a number which originally appeared in the Broadway production and had since then been cut from future versions. Merrill’s choice to incorporate this number was a smart one, easing it into the show just after Morticia’s big number “Secrets,” where it serves as a direct foil to the impending conflict between the married couple. Changing the main line from “I’ll end my life” to “I’ll tell my wife” fits the new version of the show’s plot-intents, and gives this song a great chance to be appreciated. The song also features a prominent sustained solo, performed with gusto by Kevin Cleaver.

Director Debbie Barber-Eaton brings a great deal of articulate nuance to the production, finding little ways to make the production standout among the many that have been performed in the area over the last year. The wall-climbing spider (who at times is even a bit of a show-stealer) is just one of several intricate details that speaks specifically to this performance and makes it unique. “The Moon and Me”, though performed with dulcet and humorous grace by Uncle Fester, feels a bit like a gimmick. The puppet legs, though amusing when they work, just feel out of place. The simpler approach of having Fester seated on the edge of the rooftop eaves would have served the song in a better fashion. Barber-Eaton allows the characters the freedom to ad-lib a bit here and there to find natural moments of comedy among the situations of the musical without allowing these moments to drag out the pacing of the show. This sharp understanding of natural flow keeps the performances engaging and entertaining from start to finish.

Grandma Addams (Ginny White) really gets her curmudgeonly groove on in this performance. White finds a physicality and vocal affectation that suits the character’s ripe old age of 102. While there are no featured songs to showcase White’s singing abilities, she makes the most of the character during an ad-lib routine midway through the second act. Playing with the plant, named Morticia II (a nod to Little Shop of Horrors), White gets her grotesque and ghoulish kicks in this scene making Granny Addams the loveable and oddball character audiences have come to love.

The interloping outsiders are comic devices in this production that just keep on bringing the laughs. The Beinekes, Mal (Jim Reiter) and Alice (Andrea Ostrowski Wildason), are a mismatched couple who each bring their own brand of humor to the scene. Reiter has a stern hand on the aloof and detached father figure with a keen understanding of comedic pause. When he busts loose during “Crazier Than You” it shows a sharp transition in his character’s arch. Wildason is terrifyingly ‘Stepford’ particularly when she pops into her poetic blips. The inner darkness that exudes forth from her during “Waiting” is energetic, bursting at the brim with frustration, and overall an entertaining moment during the dinner scene. The pair play well off one another, particularly during the little bedroom argument scene that happens near the top of the second act.

Lucas Beineke (Daniel Starnes) is an agreeable young normie who coasts along through the performance, accentuating songs here and there with his spry young voice. A perfect match to Wednesday Addams (Lucy Bobbin) for separated duet harmonies during “One Normal Night” and joined duet harmonies during “Crazier Than You,” Starnes keeps his agreeable disposition funneling through his singing voice to keep the character realistic. Bobbin, though a bit too chipper and energetic to really feel like the irrepressible ball of malice, does have a sensational voice and doesn’t hesitate to show it off for “Pulled” and “One Normal Night.” Her words at times have razor edges and she throws verbal and eyeball daggers at Gomez from time to time, taking the more petulant and angsty teenager approach to the role.

The transient narrative figure, holding open the channels of communication between the dead ancestors and the family, as well as the characters of the show and the audience, is the whacky Uncle Fester (Eric Meadows.) His perfectly tweaked character voice and well-placed comic breaths give the character an extra quirkiness that serves the interest of the show with zeal. His singing voice is sweet and sentimental, particularly during “The Moon and Me” and his adorable shy moments with the moon in this number are too precious for words. A real character with his own sense of humor, Meadows makes the most of this curious role and delivers a great rendition of Gomez’ lunatic brother.

Keeping no secrets, Alicia Sweeney embodies the physical look of Morticia Addams with an uncanny flare. Sweeney approaches the role with her attitude rather than the beltress vocals that the tour has made the character known for. In a subtler homage to the role’s originating performer, Sweeney soothes numbers like “Just Around the Corner” into a smoky and seductive insinuation of personality and verve. Her biting edge is delivered sharply into Gomez from time to time and the chemistry and passion that they share upon the stage is a nod to the fathomless amore featured in the early television program. A saucy display of dreariness rounds out Sweeney’s portrayal of the family’s matriarchal figure.

With all the maniacal wit of a loon, Vince Musgrave takes to the role of Gomez with a practiced familiarity. Finding strong emotional attachments to numbers like “Happy/Sad” and “Morticia”, Musgrave effectively delivers all of Gomez Florencia Addams’ feelings in these songs. His accent is wildly flamboyant, a perfect fit for the hysterical character and his ad-libs here and there— especially when shushing the spider— are received to great laughing acclaim. It’s the attention to detail during numbers like “Not Today” and “Trapped” where Musgrave articulates each of the wittily penned lyrics and delivers them with robust gusto that makes his portrayal impressive. And let’s not forget his natural ability to carry the show’s strongest sustains and belts. A remarkable Gomez, Musgrave masters the character into a delightful amalgamation of cartoon, television, movie, and stage with a sprinkling of pizzazz all his own.

This production will move you toward the darkness and have you embracing your inner demons by the end of the night. A show well worth enjoying, Annapolis Summer Garden Theatre is putting their own kooky spin on this new-age classic musical.