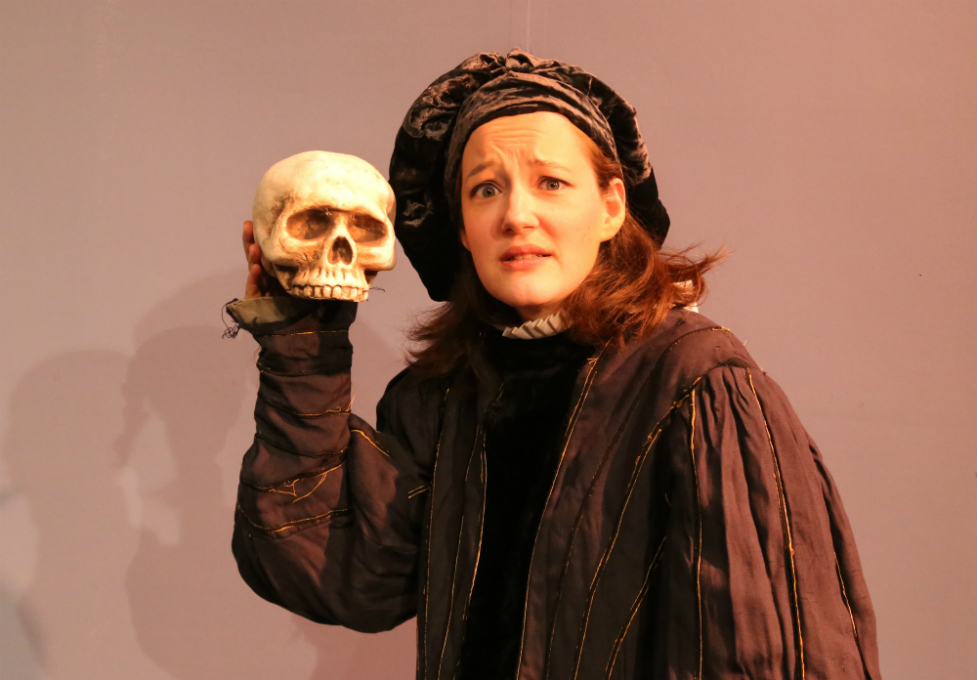 Shakespeare’s gone wild! It’s exactly like it sounds— crazy women, 37 plays, and a whole lot of vomiting! What could make for a better evening of hysterical gut-busting entertainment than the Fells Point Corner Theatre’s production of The Complete Works of William Shakespeare (Abridged)? Which, they are totally proud to present? Directed by Howard Berkowitz, this laugh-a-minute comedy will crack your funny bone wide open and unearth the Bard like you’ve never seen him before. Covering— in vomit— all 37 of the infamous plays as well as the 144 sonnets in just under two hours time is a diabolically insane feat that the cast of three takes on with vigor. A splendid time is guaranteed for all!

One does not need elaborate sets or costumes to do all 37 of Shakespeare’s shows justice. The work of Set and Artistic Designer Tony Colavito and Costumer Helenmary Ball should be commended nonetheless for their efforts, however. Colavito creates a whimsical background with purples blacks and grays in her scenic painting and a time honored quote and title draped over the top of the stage. Ball provides a series of wigs and costume accents that help delineate one character from the next; a critical component to the lightning character changes that occur throughout the performance. Though no Prop Designer is listed— whoever created the Human Head Pie for Titus Andronicus deserves a metal for creativity and replicating authenticity.

All the world may be a stage but it’s a stage in complete darkness without Lighting Designer Bob Dover. And although the light work in this play is deceptively simple, both the blinking colors during the rap number for Othello, and the misappropriated solo spotlight for Hamlet really make those segments of the show pop. The various blackouts have precision timing as well, highlighting their comic potential in a most illuminating fashion.

Director Howard Berkowitz brings three of Baltimore’s finest comedic performers together as a troupe for this hysterical performance. It’s Berkowitz’ impeccable ability to balance the show’s script against his ensemble’s ability to ad-lib and interact with the audience that makes this production remarkable. Knowing when to push forward verses when to let the actors let loose and have fun with the members of the audience brings a refreshing sense of hilarious enjoyment to the show. Finding the moments of utter camptastic over-the-top comic shtick is another one of Berkowitz’ strengths in this production. Milking those moments to the point of throwing the audience into unrecoverable fits of hysterics seals the deal.

Bart Debicki, Holly Gibbs, and Anne Shoemaker, listed only as themselves, take on the various roles well recognized throughout the Bard’s canon. They play extremely well off one another, sharing a strong sense of comedic timing, knowing when to pause for laughter so that the next series of lines and jokes aren’t plowed over or missed. Each of the trio brings their strengths to the performance creating an impenetrable chain of uproarious nonsensical humor that packs punches all night long.

Together the trio performs the amalgamated mess that is Shakespeare’s 16 comedies in one staged-reading style banter. There is a strong magnetic connection between them as they read through this truly tragic hybrid of bad comedic plotlines. Each of the performers has a sense of the other’s timing and tunes their own timing accordingly. Their work together is polished; like a comedy troupe who has been performing the show for ages, rather than only a few weeks time. The Othello rap alone is worth the ticket price to the theatre and they feed off one another in this segment with tremendous vigor.

Working the audience is their combined strongest suit. Out in the house, up on the stage, jumping from the stage to the house; this trio of performers understands how to keep an audience invested and involved with a great deal of improvisation. Toeing the performance line with a fine flirtation between a stand-up comedy show and a performance, Debicki, Gibbs, and Shoemaker bring the house down with hilarity and receive well deserved standing ovations from a crowd that simply can’t stop whooping and hollering.

Debicki, as the show’s initial narrative introduction, brings a casual ease to the stage, warming the audience to the sheer Shakespearean shenanigans they are about to endure. As time progresses it’s his frustrations and bitter jaded sense of acting and disengaging with the audience that keeps him humorous. Taking on Romeo and a good dozen other characters, Debicki is a surefire crowd pleaser, particularly when he starts up the second act in the house with his ukulele.

Gibbs is a stone cold scene stealer, if you can have such a thing in this hodgepodgery of the Bard. Playing a vivaciously vapid and supremely simplistic modern day version of herself, Gibbs parodies, mocks, imitates, and mimes her way through the tragic reality of today’s ignorance when it comes to Shakespeare. Her wigs and the way she weaves them into the show are some of the most hysterical moments throughout. Gibbs is undeniably exuberant and indefatigable; a continuous outpour of comedic energy. The truly impressive thing about Gibbs’ performance is her purposeful “Oh what a piece of work is man” monologue from Hamlet. The only true serious moment in the performance, Gibbs captures the essence of the text almost as a serene apology to the Bard for the mockery playwrights Adam Long, Daniel Singer, and Jess Winfield make of the work.

Shoemaker, as the pre-eminent Shakespearean scholar, is a firecracker. Her charismatic charm hypnotizes the audience from the get-go and her ability to adapt to the plethora of characters in the performance is unchallenged. Shoemaker gives Hamlet a whole new meaning when she takes on the title role, and her other interactions leading up to that point in the play are simply to die for. A truly striking presence upon the stage, Shoemaker is the perfect third for this phenomenal trio. Leading the troupe through Hamlet, she really zips and zings her way to the comedy of the most epic tragedy ever written.

Cast off the cheap thrills of television, or whatever else it is one does at night when not at the theatre, and go to the theatre! Specifically this theatre and see The Complete Works of William Shakespeare (Abridged) you’ll laugh so hard, Shakespeare will feel it!

The Complete Works of William Shakespeare (Abridged) plays through April 12, 2015 at Fells Point Corner Theatre— 251 S. Ann Street in Fells Point in Baltimore, MD. Tickets can be purchased at the box office or in advance online.