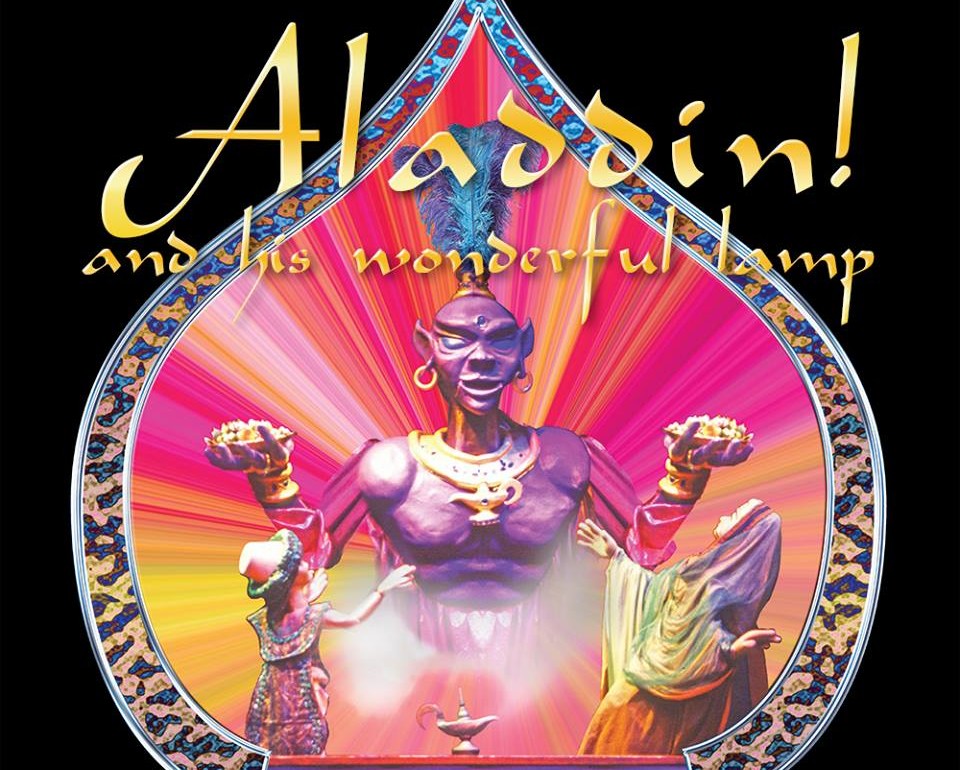 The Puppet Company in Glen Echo will show you a world; shining, shimmering, splendid! Their production of Aladdin and his Wonderful Lamp is a truly unique and magical experience for young audiences. Working brilliantly with hand-crafted rod-puppets, Company Co-Founder Christopher Piper Directs and performs in this enchanted fairytale written by Vera C. Hughes and Allan Stevens. Sticking closely to the original story as featured in 1001 Nights, with the Arabic pronunciation of the title character’s name, this unique production goes back to the story’s roots while still mesmerizing children and introducing them to puppetry; a truly fine theatrical art medium.

Mayfield Piper and Allan Stevens conceptualize the impressive costumes that are worn by the delicately crafted rod puppets. It’s little things, like the shimmery green fabric that adorns Aladdin— once he has his first set of fine threads— that matches the puppet’s shiny emerald eyes that showcases Piper and Stevens’ dedication to the details of their creation.

Christopher Piper, who directs the show as well as provides the Lighting and Video Animation for the show, dons each of these creative hats with pride. The subtle projection shifts allow for easy adjustments in location throughout the performance in a medium that most children already recognize. The use of silhouette play in these visual projected animations is a clever way to incorporate puppet motion into the performance even when the puppets are not active and present.

Piper’s Lighting Designer is dazzling; his use of shadow play is striking. When Aladdin first attempts to set eyes on the princess and she flitters about through the scenery the subdued blue lights mingled with the dancing shadows really set the playful tone of the moment. There are other moments of Piper’s lighting that display the puppets in all their glory and his use of smoky haze effects for the arrival of the genie and the speaking spirit of the evil sorcerer are enchanting.

Vocal effects are thrown into the mix as well to further engage the audience; a haunting echo used on the spirit of foresight summoned by the evil sorcerer and a low rumbling voice on the genie of the lamp add a theatrical magic element to the performance. Enhancing these sounds are the stunning visuals provided by the puppets themselves. The prophetic spirit puppet is white and flowing; shrouded by mist she looks almost ghostly. The slave of the ring is but a mere wisp of darting gold attached to a flexing rod, whipping about like an ethereal glimpse of gold.

It’s the genie puppet, both larger than life, and more regally majestic than the wildest depths of the imagination, that truly inspires gasps of awe in the audience. There is a striking and enchanting beauty in the craftwork of this enormous puppet; mysterious and marvelous and just a little bit scary too. The way he arises is a strike of surefire theatrical genius as well.

Piper, along with puppeteers Elizabeth Dapo and Joshua Aaron Rosenblum, take on the task of puppeting the show which features a series of characters. The deliberate gestures they make with these rod puppets are spectacular. Carefully handing objects back and forth between one another, maneuvering as if they were lifelike humans in miniature. Piper takes on the role of the Sultan and the evil Sorcerer; both having uniquely distinct voices and attitudes as they are encountered throughout the performance. Dapo plays the princess and Rosenblum our title character; together the trio creates honest puppet magic and a wondrous theatrical experience for children of all ages.

Wish no longer, this enchanting and mystical tale is here to amaze your very eyes with all of its hidden treasures and wonders of puppets upon the stage.

Aladdin and his Wonderful Lamp plays through March 15 2015, at The Puppet Company in Glen Echo Park— 7300 MacArthur Boulevard in Glen Echo, MD. For tickets call the box office at (301) 634-2270 or purchase them online.

Review: The Three Billy Goats Gruff at The Puppet Company

Review: Rapunzel at The Puppet Company