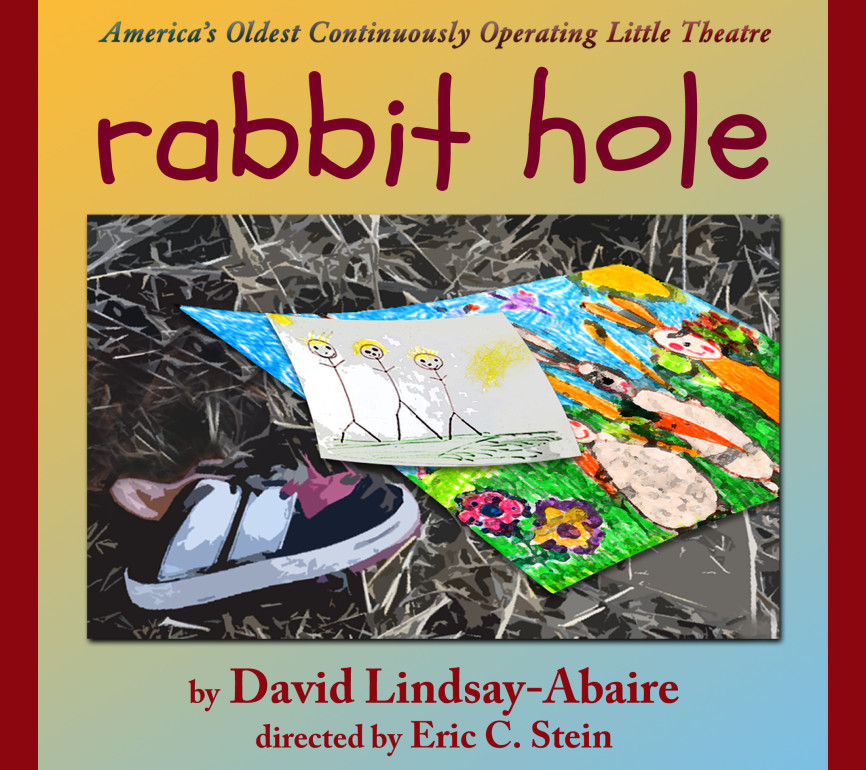 People want things to make sense. People need things to make sense, especially when the universe upends all logic and forces grief upon life through loss. A poignant and evocative drama written by David Lindsay-Abaire, Rabbit Hole examines loss and more importantly coping and moving forward with loss in a world that no longer makes sense to those that have suffered. Directed by Eric C. Stein, this Vagabond Players production hits the mark in taking a myopically focused drama and making it readily available for everyone who has suffered loss in their life.

While the performances in the production are impressive, the overwhelming presence of the stage is most memorable. Set Designer Maurice “Moe” Conn constructs a reality so intimately laden with detail that it could be the home of anyone in the audience. The set looks lived in; populated with little decorative nuances that furnish it into reality. The realistic setting of the production lends itself to a detail-oriented set, but Conn takes his design work a step further by creating organized depth ratios between spaces. The rooms flow seamlessly into one another, so much so that the rest of the house is almost expected to exist beyond the doors where the audience cannot see. Conn’s choice of coloring, the inviting but subdued blue for the main room, is a reflection of the overall mood settled within the house. His work creates a sixth character among those in the cast; at times even representing the spoken character of Danny, symbolically existing in his absence.

Complimenting Conn’s design work is the precision use of lighting in this production. Lighting Designer Joel Selzer comes to the plate with a keen understanding of indoor ambiance and how to effectively time them to modern lighting. The “dimmer fades” in the living room are timed flawlessly and radiate an authentic feel out over the set when they happen. Selzer’s moment of shining glory is realized during the letter scene in Act I. With Becca in the elevated upstage space of “Danny’s room” and Jason out in front of the stage the marriage of the differing lights in this scene are sublime. Shadowy blue light that just barely highlights Becca’s character with a stark white spotlight that fully exposes Jason’s character; the juxtaposition becomes striking in the way of a natural phenomenon like the night sky populated with stars.

Director Eric C. Stein infuses a universality into the production. While the play is clearly focuses on a specific type of loss, Stein’s approach to the text makes the condition more universal. In this way, those pointed messages about coping with grief and learning to struggle forward despite the unbearable weight of loss become more readily available to everyone in the audience not just to those who have experienced the type of loss that the characters in the tragedy have felt. Stein’s approach to the modern element of the production feels natural; the pacing on point for the most part, though there are scenes that do not clip along at the pacing of the others. This is not to say by any means that the show drags along or loses the interest of its audience.

Though he is experienced only briefly, Jason’s (Brendon Morrison) forays into the household are intensely received. Morrison has a congenial sincerity to his character portrayal; a guilt-ridden innocence that overcomes him even in the calmest of moments. His initial introduction is through a letter, but even in his tranquil state the nerves of guilt are presently heard and felt. It’s not until his scene with Becca (Zarah Rautell) the multidimensional layers of his character are unveiled. The awkward tension between Morrison and Rautell in that scene is palpable and thick, hanging in the air like a drenched towel attempting to drip dry.  His confession monologue is gripping; moving in a truly compassionate and evocative fashion.

Izzy (Ryan Gunning) punctuates the scene in a similar fashion in the sense that her lines are memorable, but not because of their great emotional depth. Gunning’s character serves as the hints of levity sprinkled throughout the production to keep the show from being a complete emotional vortex or sorrow and grief. Her comic timing is efficient and her zingers quip zestfully into the rhythm of conversation, particularly when barbing at her character’s mother, Nat (Amy Jo Shapiro.) Shapiro, who radiates brilliance in this two-fold cameo role, delivers delicious wit when necessary and finds the balance of her humors among the more harrowing confessions of her own grief. Shapiro’s initial monologue-rant about the Kennedy curse is delivered with such sharp sarcasm that it is easy to forget one is watching a tragedy. But for as funny as she makes the scenes that call for humor is as heavy as she weighs down a scene that requires emotional turmoil.

Howie (Don Kammann) runs the gamut of emotional expression in this production. Feeling natural and settled and in touch with reality, his character portrayal creates a staunch comparison against Rautell’s detached approach to her character. Kammann reveals his character’s inner struggles in blinks and flashes. While at first this seems trite in a stereotypical masculine fashion, the bursts of emotional outbreak that pepper these flickers give them intense grounding in empathic reality. His emotional struggle is fierce, to say the least, and when it finally all comes pouring out there is a cathartic appeal to it; a sincere release of internal festering demons. Truly a remarkable and well-rounded performance, Kammann is the access point for the audience, particularly when it comes to progression with coping.

The show is heavy, intentionally focused on loss but there are exceptional messages generously plied throughout the performance; an emotional caveat for how to cope once you find your footing in the upending disturbance of loss.