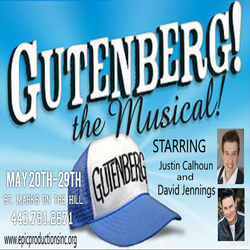 In a world where we see four productions of Shrek within four months and four miles of each other, it takes a great big leap of faith to venture down the path less traveled, particularly in the genre of musical theatre and especially when it comes to the journey of opening a new theatre company. As Epic! Productions heads into its second season— preparing to mount it’s second musical production, Gutenberg! The Musical,