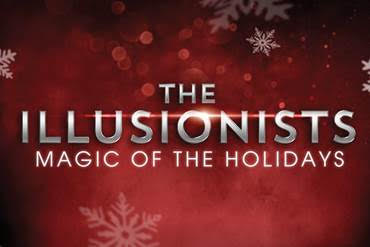 What is magic? Is it just a misdirection that a magician attempts to hide their secret moves? Or is it something more than that? You’ll have to find out this holiday season at The National Theatre as The Illusionists: Magic of the Holidays lands for a one-week limited engagement in the unprecedented 16-show season of one of DC’s national artistic treasures. Featuring world-class magicians— The Elusive, The Trickster, The Daredevil, The Delusionist, The Manipulator, The Transformationalists, The Showman— this enchanting and lively magic show is fun for all ages and brings the mesmerizing fantasy of magic to the nation’s capital this holiday season.

Creative Producer and Director Neil Dorward has aligned eight talented magicians (seven acts, with one being a duo) and four very tinsel-decked magical assistants, for the audiences’ pleasure and entertainment. At this particular performance one of Jonathan Goodwin’s— AKA The Daredevil— stunts as left unattempted due to unforeseen technical difficulty, but that didn’t ruin the overall experience. Each of the magical personalities appeared multiple times (Goodwin excepted, though he did pop up as a magical assistant in another trick) throughout the course of the evening to demonstrate all the razzle and dazzle magic of all sorts can bring to a stage show. Illusion Director Mark Kalin mostly deserves praise as various of the larger illusions all seemed to go off without a hitch.

The holiday atmosphere is mostly infused into this incarnation of The Illusionists tour by Composer Evan Duffy who takes iconic holiday carols and tunes and adjusts them to the flow and pathos of each of the tricks. When some of the more diabolical events are occurring, tunes like “Carol of the Bells” find themselves echoing with eerie resonance in the background of the magical events. The creative team on the whole— everyone from Magical Consultant and Writer David Regal to Lighting Designer Hugo Bosseny— contributes in a positively pleasing fashion, giving this show a little extra flare for the holidays, though nothing so saccharine as boughs of holly or dancing snowmen.

The acts themselves are quite impressive, with only one or two having hiccups that were slightly off-kilter from the prestige that accompanies the name The Illusionists. Florian Sainvet, known better as The Manipulator, features his iconic Terminator-esque routine, where he manipulates colored discs via sleight of hand from his robo-suit. Sainvet’s timing in this particular exercise was just a microsecond off, which will only be slightly disappointing if you’ve seen him execute this routine before (or are watching the way the lights and the disc-flips don’t quite align.) Sainvet does earn well-deserved gasps for his gravity-defying body contortions whilst in the aforementioned suit; the core muscular strength it takes to hold some of those far-leaning positions is beyond impressive.

Called The Transformationalists, Sos & Victoria are sheerly spectacle. If you’ve never seen successful quick-change artists, you’re in for a delightful treat with this duo. A jazzy, up-tempo “Jingle Bells” medley underscores most of their routine as Victoria performs “transformation after transformation.” A black drape pops up, or comes down, over the artist, she gives a quick shimmy, and BLAM total outfit transformation. And Victoria executes these changes in mere microseconds and each one to perfection without a hiccup or hitch. Anyone who knows the complicated nature of layered costume quick-changes can have a deep appreciation for her technique. Sos, who only has one transformation of outfit, but it is quite impressive all the same, lets Victoria shine throughout this routine and is the one assisting with the black-veil of magical sorcery.

A magic show isn’t a true magic show without some deeply involved audience participation. The Illusionists: Magic of the Holidays is chock full of it, everything from the opening greeting with Dizzy aka The Trickster, through to the end which features the front-runner of the evening, Steve Valentine, The Showman. (Not to be confused with Valentin Azema, The Elusive!) But one of the most impressive audience interactions features Stuart MacLeod, The Delusionist. Wishing to perform a Christmas miracle— perhaps one that Mr. Christ (as he says) never gets to partake in at the holidays because at Christmas time he’s still a wee infant— The Delusionist brings a member of the audience up to the front of the house and insists upon performing the miracle of transformation water into wine. But not before asking this random audience member for an alcoholic beverage of their choice. At this show, the audient said “Cosmopolitan” and a pithy joke about “low bars being set” was made; The Delusionist transformed a bottle of good old fashioned water (which he had said audient break the seal on and taste first) into red wine. Not a very impressive trick if you think about it, but MacLeod dazzled the tinsel right out of everyone watching as seconds later he poured that same water into a different glass and made— you guessed it— a Cosmopolitan. The audient drank both, confirming they were real alcohol; talk about a holiday miracle.

Valentin Azema, The Elusive, was very inviting to the audience, drawing them into his tricks by explaining everything that he was doing, only his explanation just resulted in further mind-blowing magic. Just when the audience was believing that they were understanding the nuance to his trickery, he flipped his style and completed his illusion in a different fashion. Very congenial and friendly, Azema performed two series of “box-based” tricks that really won the audience over.

Show-master Steve Valentine, aptly named The Showman, had the chuckle-some personality of a child stuffed in an adult’s body. He was charming, he was cheesy, he was indefatigable, and a bit like sticky Christmas pudding, by the end of the show, he grew on you. The majority of Valentine’s trickery and magical illusions were up-close sleight-of-hand, which he executed quite flawlessly. But beneath all that cheery charm was a warm and radiant heart, particularly when he invited the two littlest members of the audience up to the stage to assist him with different tricks during the evening. Bringing the magic of Christmas to everyone with the penultimate trick of the show (and one seemingly unending trick that read a bit like an unending infomercial but the audience seemed to love all the same), Valentine was the perfect selection for this holiday engagement.

Come be dazzled, come be mystified. This is perfect for audiences of all ages, those who have seen magic before and those who will be experiencing it for the first time. The Illusionists: Magic of the Holidays is a sparkly stocking stuffer perfect for everyone this Christmas season.

The Illusionists: Magic of the Holidays plays through December 8, 2019 at The National Theatre— 1321 Pennsylvania Avenue NW in Washington, DC. For tickets call the box office at 800-514-3849 or purchase them online.

The Illusionists at The Kennedy Center

Review: The Illusionists at The Kennedy Center

Champions of Magic at The Hippodrome Theatre
Close