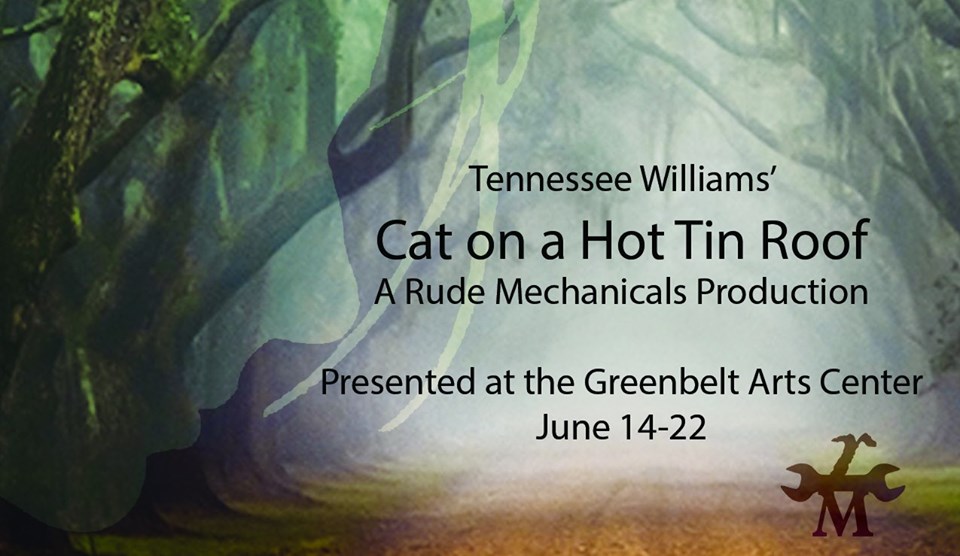 Mendacity is the system we live in. Death is one way out. Liquor is the other. Unless of course the crystal decanter top fuses into the bottle-neck and prevents you from your liquor. (Try the screw-top.) Feeling a little uncomfortable yet? A little like a Cat on a Hot Tin Roof? Then you’ve found your way to The Rude Mechanical’s production of Tennessee Williams’ other play, or his other, other play. Not the one with the street-screaming for Stella or the one with all the little glass animals and the jonquils and gentlemen callers, but the one about mendacity. In layman’s terms, the one about lies. And lying. And liars. The Rude Mechanicals continue to stretch their repertoire muscles outside the bounds of the Bard and his contemporaries, accessing Tennessee Williams’ darkly comedic drama with their current production of Cat on a Hot Tin Roof as Directed by Michael F. McCarthy and Assistant Directed & Stage Managed by Jeff Poretsky.

Williams’ work puts the ‘fun’ in dysfunctional with the southern family from hell circa 1950. Director Michael F. McCarthy captures this family dynamic exceedingly well in both his character development and overall approach to the plot. The interpersonal dynamics between characters— coming in pairs, two at a time— are a driving force in this production; McCarthy sees to it that these connections are well-established as the play progresses. Pacing is snappy, almost rushed at times. This feels like an attempt to drive up the tension in certain scenes that feature elevated stakes and vocals. By approaching some of the scenes in this fashion, the reveal of vital information occasionally gets lost in the inarticulate and overly emotional verbal discharge between the actors. It is a difficult balance to strike— having a pair of actors arguing in a realistic, live-time fashion where there words are crossing over one another without pausing for response all the while having volume and tempers escalate— and managing to maintain that balance so that during these moments of intense conflict, all of the critical information that Williams’ has penned into the character’s lines is readily heard and understood. This is problematic at times during the production.

McCarthy also deserves praise for his decision to incorporate Gooper and Mae’s little “no-neck monsters” into the production by way of voice-over. Megan and David Poretsky lend their pre-recorded voices to the production to create the illusion of reckless children screaming and carrying on as they race up and down the plantation halls. This is, in a sense, more effective than the physical utilization of actual children, as each audience member then pictures their own version of these “no-neck monsters” whenever the voices are cued into the scene. Ira Davis and Eric Honour, as Sound Designer & Recorder, deserve praise for their use of subtle yet effective sound effects throughout the performance, in addition to the pre-recording of the children’s voices.

Voices on the whole are impressive. Far too often in live theatre, an actor’s intense focus on perfecting a specific accent or style of speaking can ruin their character drive or motivation, even going so far as to stall and stagnate full scenes. Thankfully that is not the case with this Rude Mechanicals’ production. McCarthy gives the actors in the performance guidance for how to capture the essence of the accent without allowing it to become a hang-up. Some take things a step further and add vocal affectation as a layer of character development to these accents. On the whole, the sonic landscape of the production is sound.

Hat off (and on) to lea DeLano for her portrayal of Dr. Baugh, Reverend Tooker, and Lacey, who are all minor instances of tertiary level characters, but are memorable for their one liners or the distinct physical expression that DeLano assigns to each one of them. Daniel Dausman as ‘Brother Man’ Gooper has a nasally and reedy approach to Gooper’s speaking voice and maintains an almost shy and diminutive posture right up until his big confrontational moment with Big Momma and the others in the performance. Holly Trout, playing ‘Sister Woman’ Mae, is the epitome of southern charm, complete with the false niceties of “bless your heart” and “aren’t you just so sweet” (with Williams’ more eloquent turn of phrase, of course.) Trout too finds her moment of explosive rage, busting out of the faux pleasantries she’s kept plastered on her lips over the course of the evening, and when she does erupt, it’s rather startling and a bit scary.

Deryl Davis may not physically match the character’s moniker of Big Daddy but the personality and vocal exploration fits the bill. Davis does struggle with articulation at times, particularly during heated bouts of emotional expounding, but the emotional current that surges through these moments is often so clearly defined that the overarching intentionality of the scene becomes clear. Davis’ comic timing is sharp and well-played, particularly when his character starts flinging insults around.

Big Mamma (Shelby Sours) is her own unique force on the 28,000-acre plantation. Sours does an extraordinary job with her age make-up, making it look realistic and authentic enough that you readily believe she’s old enough to play Big Mamma opposite Deryl Davis’ Big Daddy. Filled with a slightly pickled effervescence that well-suits the character, Sours delivers the curious sense of humor that makes the Big Mamma character both larger than life and strangely laughable.

Brick (Joe Downs) is one half of the principal heavy in this production. Maggie (Allison McAlister) is the other. Downs and McAlister are formidable presences upon the stage and play exceedingly well together. Both have a strong grasp of the southern accent and are able to maintain it during moments of heated emotional exchange. Downs’ crippling injury needs a tiny bit of work to make it more believable, but this easy to overlook giving how fully present he is during intense verbal showdowns between both Maggie and Big Daddy. (He gets added props for his indefatigable determination to get a drink out of that crystal decanter.) McAlister is channeling the metaphor of her character’s namesake, particularly when it comes to her unpredictable outbursts, very much like an otherwise very tame domesticated cat. Both downs and McAlister drive home the overriding forces of mendacity that Williams’ so excellently incorporates into the binding of the narrative.

Quite the production, especially considering its contemporary nature, Cat on a Hot Tin Roof is well worth investigating this summer with The Rude Mechanicals.

Cat on a Hot Tin Roof plays through June 23, 2019 with The Rude Mechanicals at The Greenbelt Arts Center— 123 Centerway, in Greenbelt, MD. Tickets are available by calling the box office at (301) 441-8770 or by purchasing them online.

Cat on a Hot Tin Roof at Baltimore Center Stage

The Merchant of Venice at The Rude Mechanicals
Close